Wildlife biologist John Carlson, last seen in a tux in Antarctica (go here for reference), offers some reasons why penguins are admirable, despite the fact they are not “cute:”

…I totally agree with the young lady concerning the nasty nature of penguins, but I also feel I must defend the little buggers too. Any wild animal I have ever dealt with has objected quite violently to being handled. Probably wouldn’t survive very long if they didn’t, so you can’t be surprised or dismayed when it happens—No matter if they are cute or not.

If I can anthropomorphize a bit too: I would probably react similarly if some giant pulled me out of my living room, slapped a metal band on my arm, poured warm seawater down my throat and turned me upside down to “offload” my stomach to see what I had for breakfast, threw me in a bag and weighed me and then dropped me back in the living room (reminds me of the Larson cartoon with the male bear returning to the cave with an ear tag and a collar around his neck and trying to explain what happened to an obviously ticked off mama bear).

The young woman at the movie actually displayed as much ignorance as the Audubon folks and the audience by being surprised that the penguins reacted the way they did. She just got to live it and have her innocence taken away. I suspect that she hadn’t had much experience with animals prior to heading south. I think she should have done the lecture and told people the truth…although I can really appreciate the standup routine too. 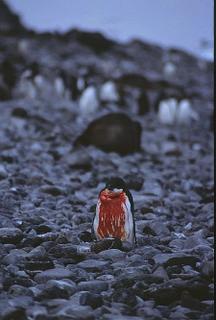 Anyway, in defense of the penguins — they are the toughest animal I have worked with bar none. I have seen penguins with large chunks removed from their sides by leopard seals that apparently managed to survive. They beat on each other horrificly in defense of their territories and withstand some of the most brutal conditions on the surface of this earth. I am still in awe of their abilities to survive the demands that their lifestyle places on them. I suspect much of their rude behavior is a result of where they live: You don’t mess with things that work in that environment. It is pretty unforgiving.

The Adelie penguin photo I have below pretty much sums up a penguin’s life for me. 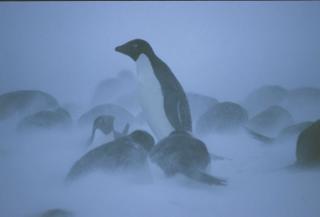