Matt is dealing with refugees and hawking; Reid finishing a report; and me? Just LIFE. Lib’s ribs are recovering well, but other complications like the need to make a few bucks keep intruding, not to mention the total breakdown of my second vehicle– nothing like being truckless, that is, without motorized transportation, just as the dogs and hawk(s)– more on that in a minute– are getting revved…

I am also trying to get up to speed on the Siberia book, do a proposal for another book that may take me to Russia, retrofit the house with a wood stove, get a broken chain saw working– and now it looks like one of my house’s main @#$%^ WALLS is crumbling. Last night I was awakened by something crawling on my leg. I threw back the covers, smashing a TV remote in the process, to find a three inch paying mantis advancing toward my crotch (It never even woke peaceful Libby!) Having disposed of the predator and drifted off to sleep, I was awakened again by a walnut- sized rock falling on my head. When I investigated I found that it had fallen from the juncture of the ceiling and the wall. Visitors to Casa Q will recall that it is a rock house, 120+ years old, and has things like permanent leaks with buckets centered beneath by tape markings, so rocks falling on heads from cracks are Not Good Things.

Regular programming will at least begin to resume. Meanwhile, here is the “new” hawk, moved here to rescue a friend in dire straits. His name is Goblin, he is a first year gyrfalcon- saker cross (which is to say he is a domestic Altai falcon) and he is huge for a male. he will be formidable if I do right by him.

On the other hand, notice the deer- in – headlight stare of the falconer…. 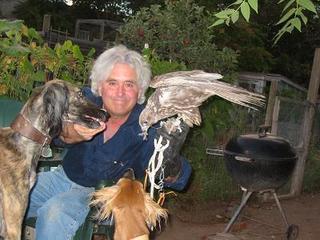