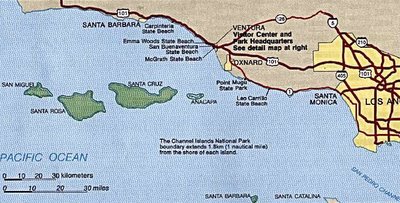 This year marks the 25th anniversary of the formation of Channel Islands National Park and the Los Angeles and Santa Barbara news media are carrying a number of pieces on issues related to the Park’s history and management. This is a fairly thoughtful article on Santa Rosa Island (see above map). The most discussed and controversial issues on all the islands relate to control and/or eradication of non-native species that are crowding out threatened and endangered natives. Black rats have been eradicated from Anacapa Island, we have posted here previously on the eradication of feral pigs on Santa Cruz Island, and deer and elk are slated to be eradicated from Santa Rosa by 2011, when the last private in-holding there shifts to Federal control.

The Channel Islands have been called the American Galapagos and they are a true national treasure. They are also covered with well-preserved Chumash archaeological sites and the oldest burial known from North America (13,500 BP) was found at Arlington Springs on Santa Rosa. Santa Rosa is also home to most finds of the pygmy mammoth.