Recently, in the incomparable 2Blowhards * , Donald Pittenger was carblogging. He described how the French carmaker Panhard, in the Thirties, made an attempt to make cars with the steering in the middle, and with curved windows on the sides. 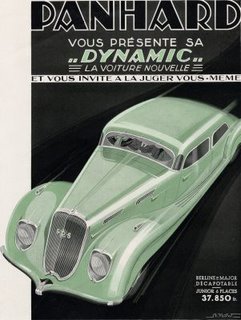 He explains plausibly why this was not a success, though I would rate the car’s esthetics a bit higher than he does.

But it got me to wondering why the French always seem to make things that look different, in cars (Panhard, Citroen) and in other things. One object that I am more than familiar with is the French shotgun. There have been many odd French gun designs, some as weird as the Panhard, but one that persists, even if it does not conquer, is the Darne. It has been in continuous production since the 1890’s because it is GOOD!

Most double shotguns, like this old American Parker, “break” on a hinge between the barrels and the action. The barrels drop down when you move a lever on the top, or, less commonly these days on the bottom, sideways. 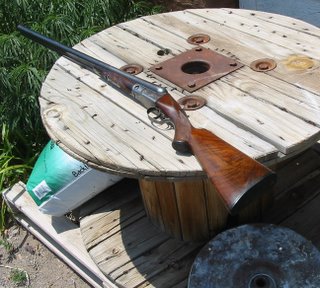 This is the near- universal standard in guns these days, from Russian and Brazilian models worth a couple of hundred dollars to English “Bests” like Purdeys that now go for over $100,000. For many reasons– for instance, you can see at a glance if it is loaded or not, and so can your companions (yeah, though it didn’t help the Veep’s buddy)– it will doubtless continue to be.

But the design has a few inherent problems. All that flexing eventually makes for wear, and even a Purdey must someday go in for repair.

And that interrupted topline isn’t as sleek as that on, well, this pair: 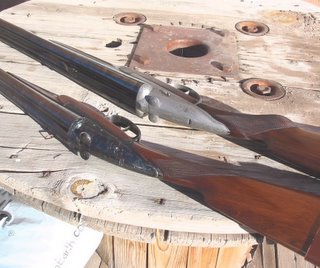 The dark one is my little 28 gauge quail gun; the silvery one is my big “ball and shot” twelve, the one shotgun so far I have ever had made for me. See those little tabs behind the action? When you pull them up , the breech block slides open, backwards, while the barrels remain in place. 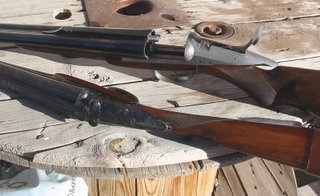 The frame is as rigid as a muzzleloader’s. Darnes never wear out– they just get smoother. And in the old days, they built elephant caliber guns on the same frames, with no extra reinforcement.

Some think they are weird. I love their looks and function.

And they cost a hell of a lot less than Purdeys.

(* Recently Michael Blowhard paid us a touching compliment, saying that “Querencia gets my vote in the category of Best (and Broadest) Range of Interests …” Thanks, Michael, but I can’t accept that– without a doubt, it is true only of 2Blowhards.)