.. to use a slightly different meaning of the word.

I have been neglecting the blog for other work, but the PC minions of Animail Rites never sleep. In Solano County, California, activists have managed to enact a ban on open field coursing– chasing hares with dogs– in advance of the threatened legisaltion. A typical informed comment from a ban supporter:

“Who wants to live next door to a dog that has been trained and encouraged to chase and kill small animals. Cats are small, squirrels are small, children are small.” (Emphasis mine).

The reasoned response of a lover of real dogs:

“My own dogs have hunted, and this is what they do in the off time, they sleep with the cats.”

“This ordinance is a step toward the supporters’ stated goal of outlawing all hunting in the United States.”

“… all five members of the board voted to ban open field coursing, even one supervisor who is also a hunter… The Solano County ordinance makes open field coursing a misdemeanorpunishable by a thousand dollar fine and up to six months in jail.”

Hat tip Margory Cohen. Any hunter who votes for this is, charitably, BLIND.

Meanwhile, in Delaware, a bill was inroduced to outlaw greyhound racing (which doesn’t exist in Delaware!) Ricka Smith, who sent this, said “The way this bill is written, even lure coursing could be construed as “racing” and animals would be confiscated by the state …”

The bill, luckily, failed. But why would the ARistas promote a bill where no racing exists? Because they can then say, “well, it has already been outlawed in…”

Meanwhile, back in California, as the ban creeps forward, it has been amended to make it even worse. From Margory again:

“Assembly Bill 2110 was recently amended and the new language will affect certain AKC sanctioned events. The bill will prohibit “live lure coursing,” which is now defined as “a competition in which dogs are, by the use of
rabbits, hares, or foxes, assessed as to skill in hunting live rabbits, hares, or foxes.” AB 2110 will effectively outlaw Beagle Field Trials, Basset Hound Field Trials and Dachshund Field Trials within the state of
California.

“The original intent of AB 2110 was to outlaw “live lure coursing,” defined as “any activity in which a dog is left untethered and allowed to track and pursue any rabbit, hare, or fox and that results in the injury or death of
the rabbit, hare, or fox.” In AKC sanctioned events dogs trail the scent of an animal, but they do not kill the animal.

“As amended, AB 2110 threatens the rights of Beagle, Bassett Hound, and Dachshund breeders and owners to prove the merits of their dogs as true working hounds, capable of performing tasks for which these breeds were originally developed. Individuals dedicated to continuing and refining the innate abilities of these scenthound breeds deserve the right to continue their pursuits, which in no way threaten the native rabbits tracked only by scent.

“AB 2110 now eliminates that right and should be vigorously opposed by everyone committed to purebred dogs and working field trails, regardless of their personal breed.”

People like the Solano congressman or many falconers I know keep thinking THEIR sport is exempt. It’s not.

My friend Timothy Hume, artist and breeder of flying pigeons and Welsh ponies, who lives on Saltspring Isalnd in British Columbia, has a new project.

Welsh mountain ponies trace their ancestorship back through Hackneys to the Darley Arabian, one of the four foundation studs of the modern Thoroughbred. 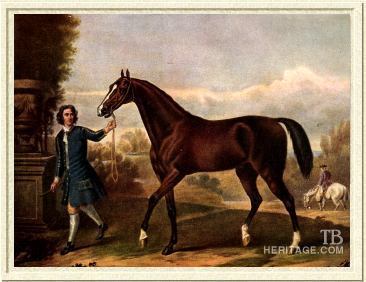 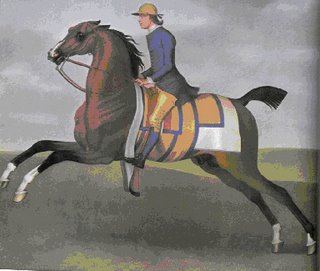 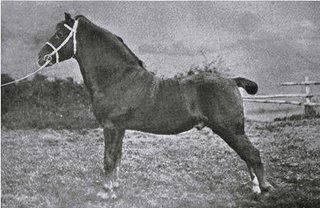 One of the latest scions of this line is Phantom Orchid. 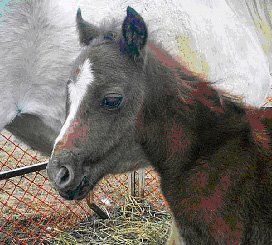 He is named, for obvious reasons, for this rare British Columbia flower. 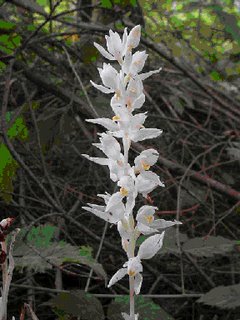 Timothy has produced a limited edition print to support the ongoing efforts to preserve the breed. He says: “[This is a] Limited edition hand- cut, hand- printed serigraph by Timothy Hume.

“You can help this restoration project by purchasing one of these unique prints.

“All money raised from the sale of these rare prints from my private collection will be put into the preservation of the Islander bloodline.

“Please contact me if you want to help: artangel@telus.net 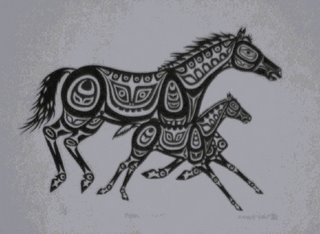 (“Hume’s Folly” is Timothy’s title for his project.)

“In Syria, once, at the head-waters of the Jordan, a camel took charge of my overcoat while the tents were being pitched, and examined it with a critical eye, all over, with as much interest as if he had an idea of getting one made like it; and then, after he was done figuring on it as an article of apparel, he began to contemplate it as an article of diet. He put his foot on it, and lifted one of the sleeves out with his teeth, and chewed and chewed at it, gradually taking it in, and all the while opening and closing his eyes in a kind of religious ecstasy, as if he had never tasted anything as good as an overcoat before, in his life. Then he smacked his lips once or twice, and reached after the other sleeve. Next he tried the velvet collar, and smiled a smile of such contentment that it was plain to see that he regarded that as the daintiest thing about an overcoat. The tails went next, along with some percussion caps and cough candy, and some fig-paste from Constantinople. And then my newspaper correspondence dropped out, and he took a chance in that — manuscript letters written for the home papers. But he was treading on dangerous ground, now. He began to come across solid wisdom in those documents that was rather weighty on his stomach; and occasionally he would take a joke that would shake him up till it loosened his teeth; it was getting to be perilous times with him, but he held his grip with good courage and hopefully, till at last he began to stumble on statements that not even a camel could swallow with impunity. He began to gag and gasp, and his eyes to stand out, and his forelegs to spread, and in about a quarter of a minute he fell over as stiff as a carpenter’s work-bench, and died a death of indescribable agony. I went and pulled the manuscript out of his mouth, and found that the sensitive creature had choked to death on one of the mildest and gentlest statements of fact that I ever laid before a trusting public.”

Just got this remarkable photo from Vladimir Beregovoy of a Kamchatkan feeding some very polite dogs slices of seal meat. 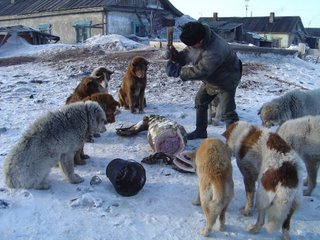 The photo is by Arthur Chubarkin, a noted Russian traveler. His friend wrote to Vladimir: “In the picture are his dogs of his sled dog team, which he takes to the North Pole. He participated in may expeditions, including circumpolar international ones. In the picture, a Chukcha national is feeding his dogs– he is a caretaker there”.

My ferocious old friend David Zincavage has had a blog for a while and I didn’t even know it! Let me introduce you to Never Yet Melted.

Also at O & P: Odious does not like Culinary Institute graduates.

A sample: “I can only imagine the life of these graduates before they found their calling. Lying on the couch in their parents’ basement, dreaming of a land of Cocaigne with rivers of Mountain Dew and Cheeto-trees, inhabited entirely by girls — gone wild! And as they lift one orange-powdered finger to check out the blocked soft-core pr0n channel for a breast or maybe an elbow, there it is: Destiny. An ad telling them that they too can have a career, be respected, even worshipped. In two years, they shall be one of the elite, a fire-breathing no-holds-barred chef de cuisine with a tall hat and a knife almost large enough to compensate for Nature’s cruellest jest.”

Inspired by seeing “V for Vendetta” (conclusion : fun but not serious) Peculiar found this post by John Zmirak, proprietor of European Reactionary from Queens and author of the hilarious “The Bad Catholic’s Guide to Good Living”, doubtless the only book blurbed by both chef Mario Batalli and Catholic priests that contains a roadkill recipe. Zmirak suggests how Catholics might celebrate Guy Fawkes’ Day:

“While this day is not part of the Church’s liturgical calendar, there’s no reason we can’t enjoy it—albeit giving the holiday a bit of a twist. Why not get the baking enthusiasts in your family (i.e. the girls) to make a House of Parliament out of gingerbread? Find pictures of these exquisite gothic buildings on the Internet, and make the best copy you can, lovingly adding details with icing, perhaps even forming a tiny King James I out of marzipan. Unveil it at the outset of tonight’s family dinner-or at a gathering of friends. As dinner unfolds, tell the story of Guy Fawkes and his friends—then for dessert take the gingerbread parliament outside, stuff it with M-80 fireworks, and blow it all to hell.”

I can’t help thinking this might remind Mr. P. of his childhood, when his mother would make elaborate gingerbread houses at christmas, win prizes with them, and then give them to young P. and his friends on New Year’s Day to destroy by any means they chose…

. Pet owners must have their animals spayed or neutered and microchipped
by Dec. 31, 2007.

Lousiana legislators do the right thing. “With little debate, the Senate voted 39-0 Monday for a bill that would prohibit police from confiscating firearms of law-abiding citizens in times of emergencies or disasters.”

Also from Tom, a great new transitional critter between sea and land animals. Tom’s comment is worth reprinting too: “Thank God, literally, we Catholics don’t have to fool around with Fundamentalist Creationism crap. Anecdote: A friend of mine’s sister is a nun and the principal of a Catholic girl’s high school. When she found a biology teacher trying to inject Creationism next to Evolution, she fired his ass without blinking. Even “Intelligent Design” is anything but. How is it that people can’t see that there is absolutely no contradiction between the mechanism of Evolution and belief? “

Apropos of that subject (“intelligent” design), a link from John Hawks’ excellent anthropology blog sent me to this profile of biologist and filmmaker Randy Olson, whose forthcoming “Flock of Dodos” sounds both scientifically sound and hilarious. He wants scientists to use humor and plain speech to defend themselves and evolutionary ideas: “….when he watches the advocates of intelligent design at work, he sees pleasant people who speak plainly, convincingly and with humor. When scientists he knows talk about evolution, they can be dour, pompous and disagreeable, even with one another. His film challenges them to get off their collective high horse and make their case to ordinary people with — if they can muster it — a smile. “