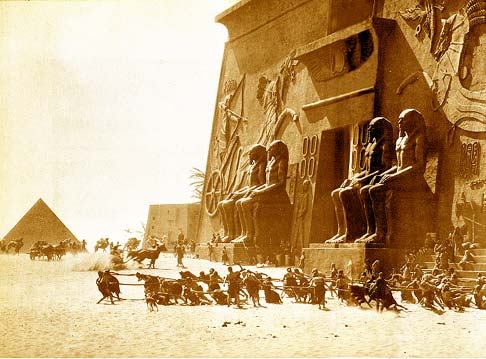 In 1923, the silent movie classic “The Ten Commandments” was filmed by Cecil B. DeMille in the Guadalupe Dunes area of northern Santa Barbara County. It had the largest production budget of any movie made up to that time, with huge costs incurred building the massive sets (see the above still) and hiring and supporting a cast of hundreds of extras. 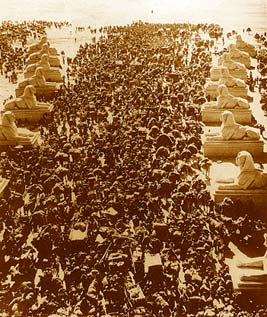 Look at this crowd scene, with all of those sphinxes. What appear to be great stone statues were really plaster of paris put on wooden forms. What looks like large stone buildings were really painted canvas, tacked to wooden frames. In addition to the sets, DeMille and his producers built a massive tent camp to house and feed the actors, extras and crew.

At the conclusion of filming, DeMille faced the decision of what to do with the sets. He and his financial backers opted to have them knocked down and bulldozed into the sands. Locals scavenged a lot of usable lumber, but eventually the buried movie set was forgotten.

Until 1983, when documentary filmmaker Peter Brosnan came across a cryptic reference to the fate of the set in DeMille’s autobiography. He eventually tracked down the location, and in association with a local archaeologist, John Parker, conducted test excavations to prove what he had. You can read an account of their story here. 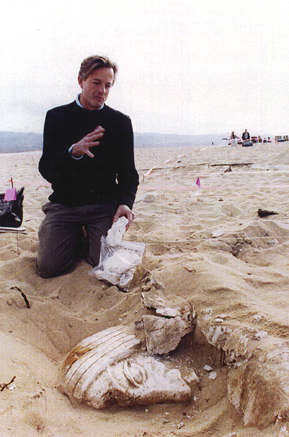 Here is a picture of one of their finds that I borrowed from a website established by Brosnan and others to raise funds for the preservation of the site. They have started referring to it as “The Lost City of DeMille.” This was a real dig and the location has been recorded as an historic archaeological site with the designation CA-SBA-2392H. The archaeologists conducted a ground-penetrating radar survey and estimate that two-thirds of the set material is still buried in the dunes. They also mapped a dozen large targets that they believe are sphinxes.

I really wouldn’t have known about this except that the Dunes are located in a county park, and three years ago Connie and I worked on an archaeological survey for a new entry road and parking lot for the park. The “Lost City” turned up in our file search, and our survey actually located more material associated with the movie set that had not been previously mapped.

I have apparently run out of capacity for images in this post (Thanks, Blogger) and will continue in another to show you some more.

2 thoughts on “The Lost City of DeMille”

Leave a Reply to Heidi the Hick Cancel reply