Borrowing a page from the 2Blowhards playbook, here’s a clip from YouTube, sent last night by my friend Jenn, formerly of St. Bernard Parish, which is just outside New Orleans.

The musician is Grayson Capps, another local who had to leave the city. I wrote up a short review of a gig we caught before the storms, here.

We saw him again last Saturday; he travels now from Tennessee, promoting his new album and new material. He sang New Orleans Waltz for us at d.b.a., the little bar on Frenchmen Street that seems now almost a portal to a lost world. A little remnant querencia.

What’s gonna come of lovely New Orleans
That rotten old town that everyone loves?
Pick up your tools, let’s rebuild New Orleans,
Make it all better, after the flood…

And now for something completely different…

With puzzled but indulgent permission from Steve, Reid and Patrick, I compiled a digest of some recent exchanges we shared offline and will post them here.

It’s basically a round robin on canned hunts, our collapsing culture and kids these days. For those wanting to skip this discussion, I’ll cut to the conclusion: We solved nothing.

But please feel free to keep the ball rolling in Comments!

Found this at the end of a story on recent security disruptions at US airports:

“A United Airlines flight out of Chicago’s O’Hare International Airport was delayed because a small boy said something inappropriate, according to a government official speaking on condition of anonymity because of the sensitivity of the information.”

And I wonder what’s so sensitive about this story that the “government official” cited feels the need to hide his name? I ask you: Do ANY of our government employees have NAMES these days??

“The US President, who asked to remain anonymous because of the sensitivity of his position, declared today that goose liver and talking children are to be banned within US borders until the War On Terror is successfully concluded.”

A couple of years ago, the discovery of 18,000 year-old diminutive human bones on the Indonesian island of Flores, set off a big stir in the popular press. The discoverers characterized this as a separate species of small humans, Homo floresiensis, and they were commonly referred to as “hobbits” on television and in the papers.

Well, now another team has studied the remains, and offers a conflicting interpretation. They believe that these don’t represent another species at all, merely pygmy H. sapiens, and that the one cranium found is from a microcephalic individual, throwing the original discoverers off in their analysis.

This is going to be one of those feuds that will go on for years and that will be fun to watch from the sidelines. At least, if you don’t have a dog in the fight. A great place to watch and keep score is John Hawks Anthropology Weblog. Hawks is a physical anthropology professor at the University of Wisconsin who writes a very readable blog on anthropological subjects that is a regular read for me. He already has a topic thread set up for this subject. 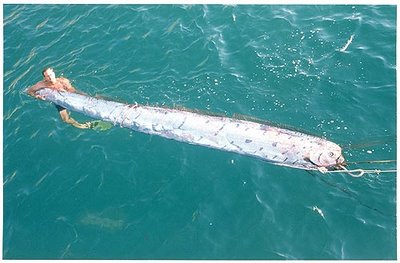 Steve had apparently heard of these amazing creatures, but I certainly hadn’t until I saw this article in the LA Times. They are likely the source of many sea-serpent sightings.

Readers: Please check below for some “new” material from the 26th forward. Several posts have been hidden in draft mode until we got the pictures inserted.

In a gentle reminder that pigeons are not mere “sky rats”, another guest post from Jake Sewall in Holland– Steve.

Common Encounters With The [Un]Common Pigeon

It’s the pigeon equivalent of “getting back to your roots.” Though domestic pigeons have been bred in an almost unimaginable variety of colors and shapes, feral pigeons – the escapees, refugees, or cast offs from the domestic cornucopia – return quickly, within a generation or two, and almost universally to the mixed shades of grey, black, and blue that their wild ancestor the Rock Dove [columba livia] has worn for millennia. That is not to say they are drab, the close observer will see the fine play of color that cloaks a perfect “blue bar” pigeon, the color that racing great Alf Baker once referred to as a bag of gold dust, the pearlescent hue of the blue, the glowing purple and green of the iridescent neck feathers.

Few people, however, bother to closely observe the bird that is, rightly, known as the “common” pigeon. Ubiquitous to almost any urban setting ranging from the smallest of villages to the largest megalopolis, the common pigeon thrives on the substrate of human civilization, which provides ready access to food, shelter, and water as well as relative security from predators.

Tolerated at best, scorned and reviled more commonly, the common pigeon is low on most lists of “favorite” animals. They are, however, if we take another meaning of “common,” anything but common…

Ted Kerasote has an op ed in the NYT (registration required) about new dog regs that, if they stand up, will require all dogs in the New York City area to be on leash all the time.

When are we going to learn that perfect safety is impossible, and that attempts to acheive it destroy even minimal freedom for us and our non- human symbionts? (They may even destroy that symbiosis itself, which may be the agenda for some proponents of such regulations). I would hate to be a city dog or a city dog owner (pigeon- flyer, whatever) today.

Peculiar and Mrs. P have returned from the wilderness, finding rain, opera, and New mexico culture. He also has some comments on Turkish music– I have added to my wish list– and a poster for a movie that really does look like Larissa.

Meanwhile, she laments that studying Shakespearean drama may lead to reduced circumstances. I am reminded of Hilaire Belloc’s comment when asked why he wrote so much: “My children are bellowing for caviar and pearls”.

I can also second Peculiar’s notes on rakhi, and not just Phillipe’s!

People who fly “short- winged hawks”– true hawks (Accipiters), Buteos and Parabuteos– have always gotten little respect from those who fly falcons. Falcons are “prettier” if not always more beautiful, and generally have sweeter dispositions (please, partisans, bear with me– I know there are exceptions on both sides). They have big dark sweet spaniel eyes. True hawks have eyes and often dispositions like demons.

The nobility once flew falcons. Hawks are useful. Neither is easily forgiven.

I have no dog in this fight. I currently have a Gyr- Prairie (snooty) that I fly at hares with the help of hounds (unforgivable, low- class, suspiciously “Oriental”). My totem is the Gos (uber- shortwing) so I guess I am a hopeless shortwinger at heart.

The correct technical word for a shortwing- flyer is “austringer”. The prejudices are ancient in Europe, though oddly do not exist in Asia. Here is Gace de la Vigne, writing in the Middle Ages:

“… but please do not house your graceless austringers in the falconers’ room. They are cursed in scripture, for they hate company and go alone about their sport. They wear a cloak to cover up their bird, the better to deceive the bird they seek to take. When they go to hunt, you think they are behind the falconers, but instead they are ahead, beating their drum. When you hear that noise and see the birds flying in all directions, you know that there will be nothing left in the area for falconers..”

“When one sees an ill- formed man, with great big feet and long shapeless shanks, built like a trestle…. hump- shouldered and skew- backed, and one wants to mock him, one says, ‘Look, what an austringer!’ I know the austringers would like to beat me for this, but there are two dozen of us falconers to one of them [!!], so I have no fear. Nevertheless, it is a wise man who keeps a Goshawk in his house, good kitchen- bird that it is!”

Apropos of which, Patrick has suggested a version of Randy Newman’s “Short People” with “short- Wingers”.

“Don’t want no austringers ’round here!”

By the way, Gace de la Vigne is also author of someting I want engraved on silver:

MATT: OK, here’s a pic of one graceless austringer and his lowly hawk…