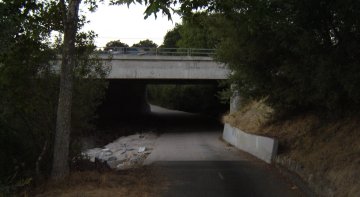 A few weeks ago, Connie and I were hiking on one of our Santa Barbara urban trails during the middle of the day. We were walking through this unremarkable overpass when we noticed chirping sounds coming from expansion joints that were running the length of the bridge. 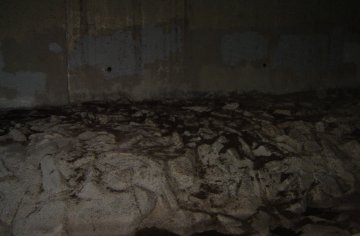 Closer examination showed these piles of bat guano under the bridge. In fact, on the trail side the guano was deposited in straight lines following the path of the expansion joints where the bats were roosting. I don’t know a great deal about bats, but have always found them interesting and enjoyed watching them fly their erratic paths through the sky at dusk. My biologist colleagues tell me that these are likely Mexican Free-tailed Bats. They are generally good neighbors, eating mosquitoes and other insect pests.

It took me some days before I remembered to go back to the underpass just before dusk to watch the bats emerge to start their day. As it got darker and darker, the chirping and chittering sounds got louder and changed in pitch as the bats awoke and urged each other to get up and go catch breakfast. 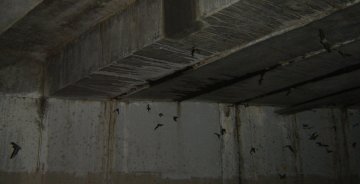 I was expecting to see some bats, but was totally unprepared for the rush of hundreds of bats that came pouring out of the joints in the bridge that you can see here. I don’t have the right photo equipment to do this justice, but I hope this shot gives you some idea of the volume of bats boiling out of the area. It was very impressive and really a lot of fun. 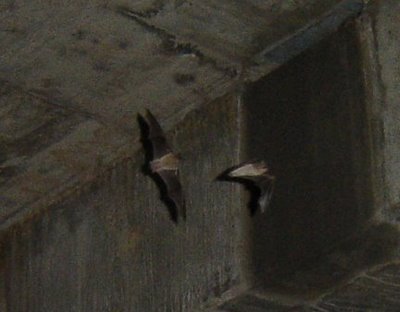 I blew this shot up some so you can see a couple of the guys zooming around under the bridge.One other observation that surprised me. When the bats came pouring out in large numbers you could smell them. An odor somewhat like wet, dirty dogs.