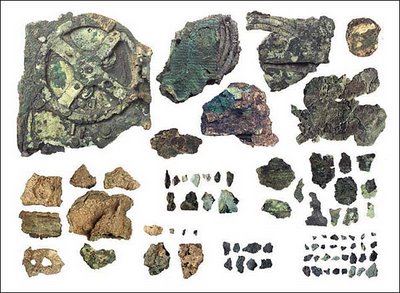 The BBC, New York Times, and LA Times all have fascinating accounts of an ancient “computer” used to predict astronomical phenomena. This ancient Greek device dated to about 100 BC was salvaged from a Roman shipwreck off the island of Anikythera between the Greek coast and Crete. Over eighty fragments have been found that represent 30 hand-cut bronze gears.

These were originally found by sponge-divers early in the 20th century and have been the source of much study since. They were recently reexamined using an x-ray tomography machine, similar to that used for human CT scans. The researchers were able to image the bronze gears more clearly and were able to decipher twice as many inscriptions on the casting.

From the LA Times:

“They concluded that the device contained 37 gears, about 30 of which still survive.

It was originally housed in a wooden case slightly smaller than a shoebox.Two dials on the front show the zodiac and a calendar of the days of the year that can be adjusted for leap years. Metal pointers show the positions in the zodiac of the sun, moon and five planets known in antiquity. Two spiral dials on the back show the cycles of the moon and predict eclipses.

The complicated meshing of the gears is a physical representation of the so-called Callippic and saros astronomical cycles. In the Callippic cycle, for example, the sun, moon and Earth return to the same relative orientations four times in 76 years minus one day.

The saros cycle predicts that, following a solar or lunar eclipse, a similar eclipse will occur 223 lunar months later.

By turning the gears with a hand crank, the user could select a specific day in the past or future and observe the positions of the heavenly objects on that day.”

This is an unexpectedly high level of sophisticated technology for the Hellenistic world, and begs the question of what other sophicated geared calculating devices could have been used for other purposes. Nothing else this technologically complex was was seen in Europe for another 1400 years, and gives a reminder of how much was lost when the Western Roman Empire fell in the 5th century.

RTWT and look at pictures of some of the reconstructed devices.

This news came at a good time for me as I have just completed reading The Fall of Rome and the End of Civilization by Bryan Ward-Perkins and am in the midst of Peter Green’s survey of the Hellenistic world, Alexander to Actium: The Historical Evolution of the Hellenistic Age. Green does a good job detailing the achievements (and failures) of the Hellenistic age. This find obviously adds more to the technological luster of the period. The LA Times article for example, points out that the famous Roman Cicero wrote of a device such as this one, but historians have always dismissed it as exaggeration or a myth. Perhaps other Classical writings should be reexamined for such “exaggerations.”

Ward-Perkins’ book is a corrective to recent trends in scholarship on Late Antiquity. A whole school of revisionist historians over the last 20-30 years have rejected the position that the Western Roman Empire was destroyed by barbarian invasions. They use less judgemental language and say that the 5th century was a “period of adjustment” where Germanic tribes who had been “invited” to settle in the Empire for “defensive purposes” assumed regional soverignty by taking over the existing Roman administrative structure. They say it was not an abrupt change, just new bosses taking over the old political establishment. It is true that the Germanic tribes did take over that structure, but the Western Empire and the Roman and Gallic populations fought it every step of the way.

Ward-Perkins shows through documentary and archaeological evidence, that commerce, culture, technology, and standards of living very quickly fell from levels in the Late Empire that were not regained for a thousand years in Europe. The Antikythera Mechanism is another example of how far that fall was.

3 thoughts on “The Antikythera Mechanism”