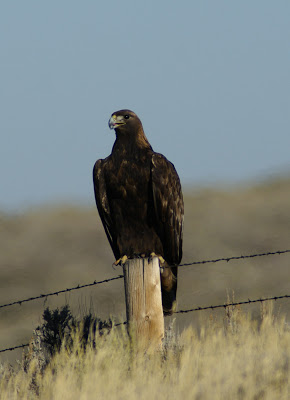 Yesterday I drove through the sagebrush country of the Little Colorado Desert, which is always a pleasure as it serves as a winter home to migratory golden eagles. I’ve noticed our eagle population has substantially grown over the last few weeks – the birds arrive with winter temperatures. They come from the north, and most of our resident eagles head further south, although it appears there is some intermixing. A magnificent nearly black-colored golden arrived on our ranch a week ago. It is very shy, so I’ve been unable to get a photo yet.

But yesterday, there were three dark-colored goldens perched on fenceposts near a roadkill. Two were shy and immediately flew, but this youngster stayed around long enough for me to admire from afar. I stopped to watch these mainly because of where they were located – a small basin that gets a substantial wintering pronghorn antelope population. Over the last five years, Jim and I have watched goldens in this small basin as they actively hunt pronghorn in the wintertime – never at any other time of year (not hunting pronghorn fawns in spring). The eagles really get the herds running and spinning. We’ve never seen a kill occur though. So what’s the deal? Is this the same birds that keep coming back year after year to this certain spot? Is it learned behavior that we’ll be able to watch for years to come?

A few years ago, I was fortunate enough to witness a golden hunt and take down a pronghorn fawn, as the doe frantically struck the bird with her front hooves. This event happened a few miles from our house. What intrigues me about these other birds is that they are hunting relatively larger game. Any thoughts?