Last New Year’s at Lee Henderson’s ranch– me with hounds. May your new year be bright.

Blogging will resume at a better level in 2009; in particular, a lot of books to review stacked up to the right of the box, and two holiday meals (Christmas’s bigos, a Polish stew with game and sauerkraut, and today’s cassoulet– still in assembly) to document.

To amuse meanwhile: Andrey Kovalenko in Kazakhstan linked me to this amazing video of an eagle attacking two displaying male Capercaillies on a lek. Look at the suicidal aggressiveness of the second cock!

I wandered around in the eagle video pages after that. We have all seen some of the popular ones but I thought this one had some very nice still pics of the “Great Philippine eagle” (better known as the Monkey eater). I wonder what the function of the unique bill is?

Which leads to this one, of a Steller’s sea eagle in training. (She seems very friendly). The function of this huge bill is thought to be breaking into the carcasses of large marine mammals in places like Kamchatka, where dead blubber is a resource…

Finally, the biggest eagle of all. Notice the odd (Spanish) dubbing– they just speak over the English. Previously only encountered that in Mongolia and Kazakkhstan- in the second case, Russian over SpongeBob Squarepants.

We are generally opposed to political correct-ness and euphemism here, but I am sympathetic to the notion that Christmas is not for everyone. 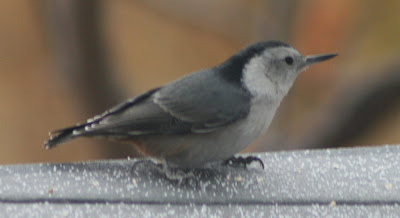 It’s taken me a while to get a half-decent shot of this white-breasted nuthatch, who’s a rather skittish fellow. 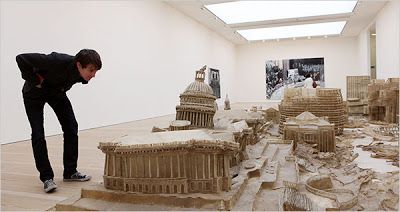 We were all intrigued by this image that accompanied a NYT travel piece raving about current art exhibits in London and what a bargain it is to travel there. This installation at the

Saatchi Gallery entitled “Love it! Bite it!” is made entirely of dog chews.
As Steve said in an e-mail: “I have this picture in my head of our dogs unleashed eating thousands of pounds (in value I mean) of dog- cookie ‘art'”.

We are way behind on our Blogroll but here are some more you should check out.

I first noticed Field Notes from this post on Annie Proulx but it is a consistently good read if you want to keep up on intelligent hunting.

A team? Raised by Wolves: strong and informed commentary by a dog trainer. And Did a Cat Shit in Here?: the science of smells, the training of rescue dogs, and related subjects, by a scentist, science journalist, and science fiction writer.

Also on dogs (and humans): LabRat has some fine behavior posts here, and here.

“It is a well known fact..” That the Virgin Mary was fond of spinach? That being eaten by hyenas doesn’t hurt as much as you think? George Leonard Herter makes the NYT. I am still looking for some titles…

It may have been too much to expect Michael Pollan, but did Obama have to pick a tool of Big Corn for secretary of agriculture?

Things were different back then, and not all THAT far back.

“Many years ago, my dad flew to Wisconsin on a hunting trip and carried his O/U onto the plane in a takedown case. He and the stewardess had the following exchange:

“Then, because it was the 60s and air travel was way better then, she probably brought him a martini. I can promise Dad was wearing a tie, too, because flying was a big deal and people dressed for the occasion.”

Are men the weaker sex, or at least becoming so? Independent article here; Derb’s take here.

Not the Onion: a faction in the Russian Communist party wants to purge Marx (because he was Jewish) and canonize St. Stalin.

Incredible discoveries of new animals in the Mekong Valley. This article is shorter but has a link to a PDF of the discoveries, well- illustrated. I would REALLY like to go to the Annamites or Yunnan to collect and photograph.

Thanks to Rebecca for sending news from the USFWS on their final decision–a long time coming–to allow a limited take of first-year migrant (a.k.a. in falconry, “passage”) peregrines.

From the Service memo:

“…American peregrine falcon populations continue to grow in the U.S.,especially in the West. The northern, or Arctic, peregrine falcon was delisted in 1995, and recent migration counts (2003-2006) indicate that the population remains healthy,” according to Service Director H. Dale Hall.
“By allowing falconers to capture birds only in specific areas and at specific times, the Service can guarantee their removal would have no significant impact on the population. The majority of peregrine falcons that migrate from North America to Central and South America (mostly Arctic and northern American peregrines) migrate along the Atlantic coast and over the Gulf of Mexico. However, many other peregrines in the eastern U.S. and southeastern Canada do not migrate far south. The FEA concludes that any take allowed is unlikely to negatively affect populations of peregrine falcons in North America or Greenland.”

On the heels of recent moves to liberalize some aspects of the federal falconry regulations, this brings us further into a very interesting time to be a falconer in the US.

These not-unrelated developments stem from the hard work of many people over several decades and reflect two important facts recognized by the Service and documented in the scientific literature: the practice of falconry has no significant impact on raptor populations, and those populations are healthy, being either stable or increasing across their ranges.

Of course, most of the species used in American falconry were never threatened (common birds such as red-tailed hawks and prairie falcons), but the peregrine was a special case, both highly regarded as a trained hawk and, by the middle of the 20th century, vanishing in the wild. Its story of alarming decline and carefully charted recovery has iconic status. As an example of how widespread use of an environmentally persistent pesticide can affect animals far removed from its target, the peregrine’s story will be textbook fodder for years to come.

That US falconers will have some opportunity to resume this age-old (but usually brief) relationship with the passage peregrine is a source of great excitement for many. There are numerous falconers still practicing who remember trapping young peregrines on beaches along the Eastern seaboard and the Gulf Coast. These birds were almost all “borrowed” for a single season, flown at snipe, dove and ducks through their first winter of life and then released or simply lost by springtime.

Today’s commonplace use of radio telemetry will allow more of these birds to be kept for subsequent seasons. How this will affect the annual harvest of passage peregrines by the very small number of qualified falconers remains to be seen.

While in my personal falconry I admire the way hawks mature over several seasons, and I tend to retain the same bird from year to year, I would like to know some falconers will continue to pursue the traditional (that is, rather fleeting and tenuous) relationship between human and the bird called “wandering falcon.”

My friend Eric will certainly try his hand at flying a passage peregrine someday. He usually flies his passage merlins for a single season, enjoying both their fall trapping and spring release, as well as their wintertime cooperation in the field.

In the weeks immediately following their release, Eric’s merlins typically stay in the vicinity of his home fields, continuing to hunt with him while at complete liberty; he calls this special period “the post season.” I consider it a remarkable example of cross species trust and understanding, and a testament to the mutual benefit of the falconer/raptor relationship. But at some point, usually when the winds have shifted to the south and avifauna of all kinds have begun to move north to their breeding grounds, Eric’s passage falcons depart for good.

I think my friend would be satisfied, and honored, to share the same sort of life with a long series of first-time migrant peregrines. I’m looking forward to hearing his stories.

The weather here has broken much colder, it was -19 F here last night, and is finally sending waterfowl down into this region. This picture understates the population of this pond, as I was so late getting in to it that most of the over-nighters were already on their way out to feed. This area is just overrun with Canada geese in the Winter.

There was a steady stream of geese on their way out to look for lunch while I was there.

I visited this pond two or three days ago (without my camera, of course) and had seen several pairs of hooded mergansers. I was hoping to catch them today, but the non-goose crowd was down to a few coots and a pair of northern shovelers. 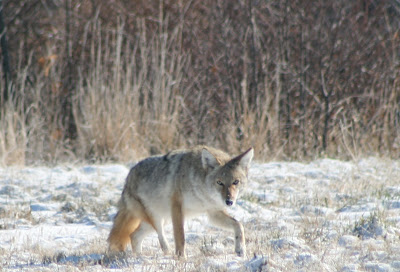 On my walk in to the pond, I got the evil-eye from this coyote. I apparently disrupted his plans to slink in through the cattails to go shopping.

Once the New Fork River freezes, we have to move our sheep herd from the south side of a highway to the north side, into a pasture with an artesian well. On Saturday morning, we walked the herd underneath a highway bridge on a narrow trail along the frozen river, and they ended up out in a huge meadow where our cow herd also spends the winter. Luv’s Girl, an adult Akbash guardian dog, came along with the herd, as did its three burros. We turned the rams out into the ewe flock, and then I ran back to the house and got three other sheep that had been bedded with the Aziat pups and turned them out as well.

All this commotion caused pains to our guard animals, especially to the older pair of burros, which don’t like any change at all. But the fun part to watch was the introduction of new sheep into the herd and how the guardians respond to that. Luv’s Girl (adult Akbash dog) and Roo (young burro) both hurried to inspect the new sheep, but in their hurry, they realized they were competing with each other for attention. So they turned their attention to each other.

Luv’s Girl stood her body broadside against the burro’s front legs, so the burro couldn’t pass. The burro chewed on the dog’s long hair on the back of her neck, with the dog tilting her head back until the burro had the flesh on the top of the dog’s skull in her mouth. I’m thinking from the expression on the dog’s face that it felt like a massage. 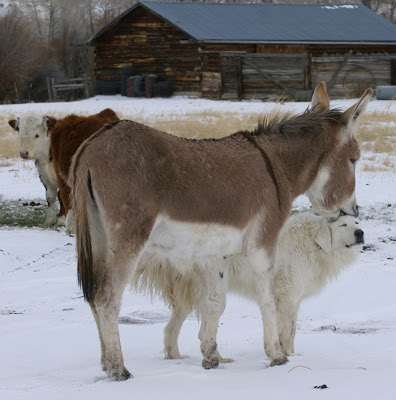 The dog and burro ended up standing there, with the dog leaning against the burro’s front legs for a few minutes, before the dog walked away and the burro went back to the fresh line of hay in the snow.

Later in the day, I took Rena (1 1/2 year old Akbash) over to see her mother, Luv’s Girl. I love to watch them play because they are so graceful. I like this shot of the open mouths. That’s Rena on the right.

Rena is on the left in this photo. It can be difficult to tell mother and daughter apart, but the sheep know at a glance which is which and respond accordingly. 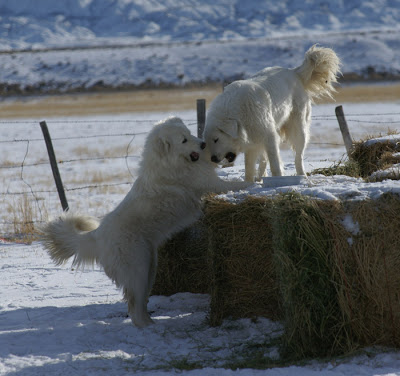