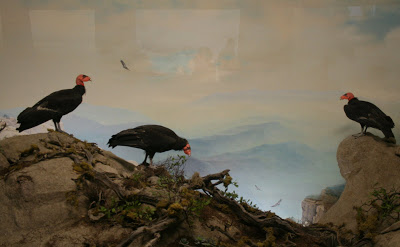 Over the weekend Connie and I took a trip to the Denver Museum of Nature and Science, the first visit we have made there since moving back. This museum holds a special place in my heart: it is the first place I ever saw dinosaur and large fossil mammal mounts when we visited on a trip from Arkansas when I was seven. It thrilled me no end.

The Museum is justly famed for its wildlife dioramas, and on our visit I was particularly intrigued by a set on rare birds originally done in the early 1920s. I believe these are the oldest exhibits still on display there. The Museum has thoughtfully left the original signs in place, with modern signs added.

At the top you can see a picture of the California condor diorama. It’s set in Ventura County (I assume the Sespe Mountains) and the original sign says that these three specimens were collected by the Museum in the ‘teens of the century. Please click on any of these pictures for an enlarged view. 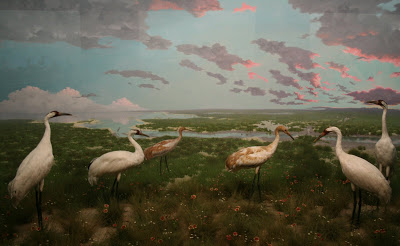 This diorama of whooping cranes is set at Aransas Pass, Texas. The original sign says these specimens were also collected by a Museum expedition in the ‘teens. 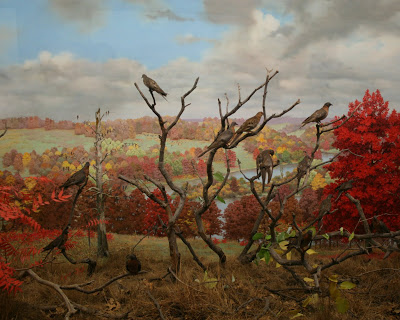 The passenger pigeon diorama is set in central Iowa. The skins were collected by a farmer in Iowa in the 1880s. I have been so totally conditioned to think of this species as lost that my first irrational thought on seeing this was, “Where did they get all of these?” 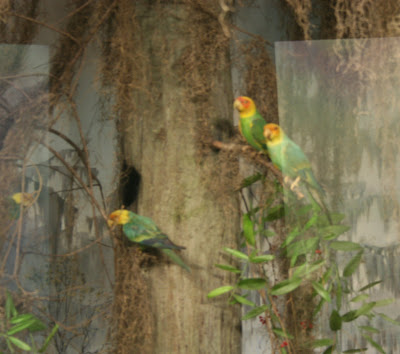 I apologize for the quality of this shot, but the reflections on the glass were more than I could overcome. These Carolina parakeets are in a diorama set in Avery Island, Louisiana. 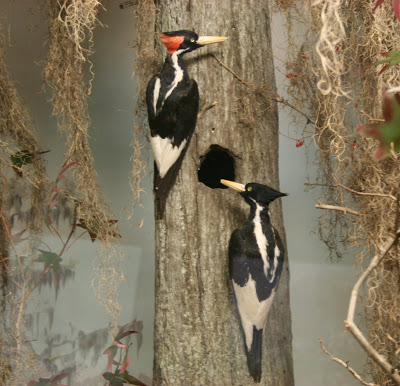 This beautiful pair of ivory-billed woodpeckers was also in the Avery Island diorama. There is another female on the other side of the case. The original sign says these mounts were all done from a collection of “old skins” but doesn’t say anything about their provenance.These dioramas were all done in 1921 – 1923. The condor and whooping crane populations were obviously in trouble at that time, and it appears that the mindset was that you’d better go out a bag a few of these birds while they’re still around. The ivory-billed woodpeckers were in the same situation – they weren’t considered extinct until a good 35 – 40 years later. Of course, Steve’s friend Tim Gallagher and his colleagues recently rediscovered some in Arkansas.The original signs for the passenger pigeons and Carolina parakeets don’t refer to them as extinct. We now know (or at least think we do!) that the last passenger pigeon died in 1914 and the last Carolina parakeet died in 1918, both at the Cincinnati Zoo. It surprised me that this wasn’t reflected in signs done a few years later, but all I can assume is that at the time there were still phantom sightings of both species and some hope wild populations existed.

5 thoughts on “Going and Gone”