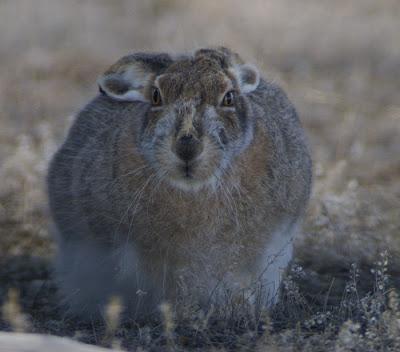 We’ve had three snowstorms hit in the last week here in Wyoming, shutting down thousands of miles of roads. These spring storms mean that we have slick, snow-covered roads with no visibility one minute, and within a few hours, the roads will be dry again.

Yesterday, we had to haul hay from a farm in Farson, about 40 minutes from our ranch. It was dry and clear, so we drove down, had a nice visit with the farmer/beekeeper and headed for home. The storm hit when we were within 20 miles of the ranch, and by the time we were 10 miles from home, the road was so slick I pulled off the highway and dropped the trailer inside an allotment fence, so we could travel safely home (without being pushed down Blue Rim by several tons of hay).

We fixed lunch and had a short nap. By then, the storm had passed and we drove back down the highway to retrieve the hay trailer. That’s the flurry of spring.

Today’s photos are two of the residents of the stackyard. I love the brindle marks on the jack, which was pretending to be a rock, sitting in the shade of a feed trough.

The ground squirrels were racing around at high rates of speed, fighting and chasing each other. It looks like this guy had a chunk taken out of his cheek. My understanding is that the Wyoming ground squirrel is one of the least gregarious of the ground squirrels, so territorial disputes can be rather nasty.