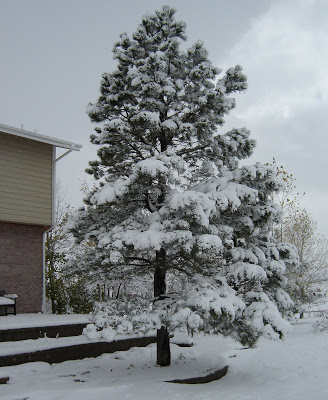 I heard this interesting piece on Ponderosa pines on NPR on the way to work earlier this week. It was taped in that beautiful area in Arizona between Flagstaff and the Grand Canyon, which they say is the best place in the world to see Ponderosas. All I have to do is walk out the front door – don’t worry, that picture was taken last Winter. Though we are officially out on the High Plains, we have enough elevation (6300 feet) that we’re back up in the zone where the pines get enough moisture to grow. Even the school down the street is Ponderosa High School.

I enjoyed the discussion on the smell of the bark. Some said it smells like butterscotch and others said cinnamon, but I firmly believe it smells like vanilla. I’ve encouraged a number of people to smell the bark on our tree, and several have looked at me like I lost my mind.