A few weeks ago, Vega gave birth to puppies underneath a sheep camp out in the wide sagebrush of western Wyoming. She became fierce to anyone coming near the camp, and the temperatures started to get extremely cold at night, so last night my friend Pete braved the weather and her wrath enough to physically pick Vega up and throw her into the cab of his truck , along with her three puppies. He dropped the dog family off in my kennel last night, and here’s the happy group in the morning sunshine. 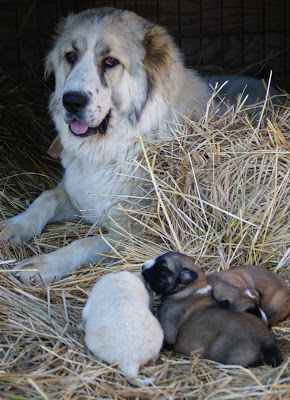 Although we had placed the puppies in a wooden doghouse lined with wool last night, by this morning, Vega had taken all the wool, and the puppies, out of the doghouse and everything was laying in the hay. There are four possible dens in the kennel, so Vega has her choice where to move the puppies to. 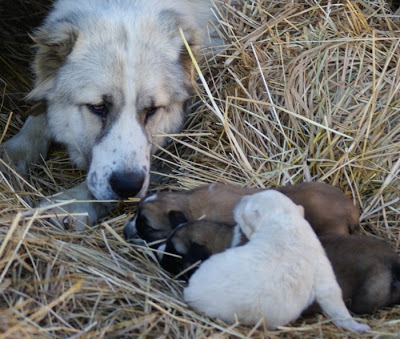 Everyone seems healthy and content. Vega lured the pups into her chosen nest and soon they were belly-up, panting in the warmth. BTW, these pups will not be docked (ears or tails), since we’re beyond the normal timeline for doing that (which is within about three days).

3 thoughts on “Vega had puppies”