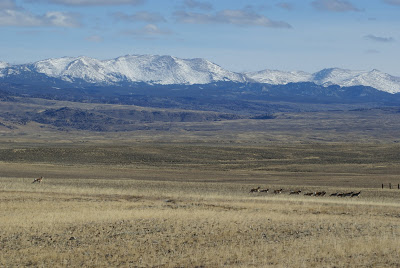 It’s beautiful fall days like this one that showcase why I love Wyoming. 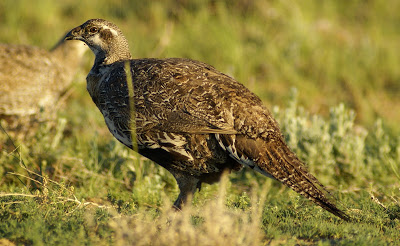 Making headlines across the West of late is a two-page preliminary report issued by a Wyoming Game and Fish Department biologist noting that barbed wire fences pose a collision hazard to Greater Sage Grouse. The U.S. Fish and Wildlife Service is expected to meet its court-ordered February deadline to determine if sage grouse should be granted Endangered Species Act protections, so the report will come into play there. Those who oppose livestock grazing on public lands are also latching onto the report as another reason to rid the western range of its agricultural industry, and its associated fences.

But everyone might be reading more into the report than it merits. WG&F biologist Tom Christiansen noted it all began when two separate falconers provided incidental reports that grouse had been injured or killed on the top wire of certain fences located near important grouse areas. The area is just to the southeast of where we ranch, in the border area of Sublette and Sweetwater counties. This area is believed to have one of the largest concentrations of sage grouse on the planet. It’s falconer Steve Chindgren’s stomping grounds (the falconer who is the subject of Rachel Dickinson’s Falconer on the Edge).

According to Christiansen’s report, “One of these falconers subsequently began marking such fences with aluminum beverage cans in a volunteer effort to reduce these mortalities.”

The WG&F study sought to quantify the level of sage-grouse fence strikes and mortalities and test whether marking devices could effectively reduce collisions in a cost effective manner that was not visually intrusive. There are two large grouse leks (traditional breeding grounds) in the area, located within just a few miles of a range fence, and the region also winters at least a few hundred grouse. The fenceline became the study area, with its three strands running nearly five miles.

Here’s the pretreatment scenario: In the two and a half years prior to treatment, observers documented evidence of wildlife fence strikes and mortality while driving immediately adjacent to the fence. They found evidence of 170 bird strikes/mortalities and two pronghorn mortalities. Confirmed greater sage- grouse accounted for 146 (86%) of the 170 strikes/mortalities documented. The other 22 observations included four waterfowl, five raptors, two passerines, one shorebird, and 12 unknown birds.

Researchers then marked ¼-mile sections of the top wire of the fence with FireFly bird diverters or homemade markers that are similar to those used in other areas to reduce lesser prairie-chicken fence mortality. In the next year and a half, collisions were once again observed, with seven grouse strikes in marked sections, and 47 strikes (36 sage grouse) in the unmarked sections. The research suggests the fence markers (all types combined) reduced bird collisions by 70 percent over unmarked sections, or reduced sage grouse collisions by 61 percent.

The study is ongoing, with the previously unmarked sections of the fence being marked, and vice versa. Markers are being changed as well, with highly reflective tape added to the white markers to increase visibility in winter months.
Although we’ll know more once the study is complete, what we know now is this: not every fence is a problem. Those that tend to cause problems include one or more of these characteristics:
1) are constructed with steel t-posts,
2) are constructed near leks,
3) bisect winter concentration areas, and/or
4) border riparian areas.
WG&F is developing guidelines for prioritizing what fences need to be marked to reduce grouse collisions, and is in the process of making markers available to ranchers at no cost.

Meanwhile, Jim and I took at drive out to the fenceline study area last week, and found one collision event – a sage grouse. There were a few grouse feathers on the top strand next to the marker, and grouse feathers in a heap on the road. But the grouse was gone – quick work for a predator. 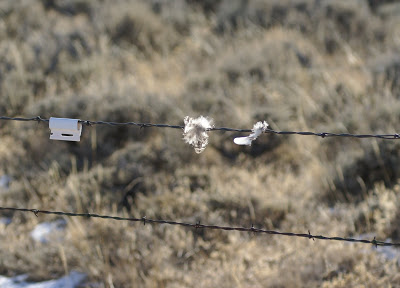 What the research effort does not mention or address is that golden eagles and other birds of prey have been known to drive their prey into fences and other obstacles to injure or kill them – it’s a hunting tactic. I watched a grouse forced into a flying crash into a willow stand in August, but Rant the guard dog was watching the birds as they came over. He was quick and he ended up with the stunned grouse, which was sorry luck for the avian hunter that had orchestrated the successful maneuver.

Happy Thanksgiving All. Just a few pictures from my last-week trip to the Texas Panhandle. Photographs by Eric Edwards and Brian Millsap.

Some scenes from hawking cottontails and jackrabbits with the Harris’ hawks: 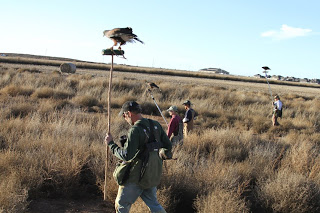 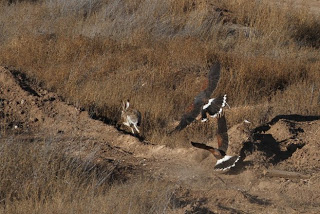 We caught quite a few cottontails and ate most of them. Here’s one that got away:

And one that didn’t:

Ernie’s first jack, a nice catch in tall cover. He got to it first but needed “air support” from Brian’s female hawk and another flown by Heather Gast. Together they had it dead to rights. Group hunting is common for trained Harris hawks as it is for the wild ones. In jack hawking, the first hawk to make contact and hold the rabbit gets the spoils: 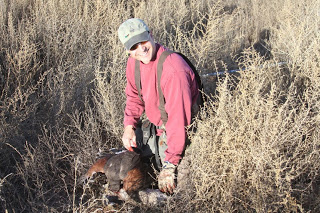 Several in our party flew longwings, too. Here’s Matt Reidy’s peregrine, Playa, about to bind and barely miss:

And later, binding and holding on:

Our host Jimmy Walker flies a great tiercel prairie. Here’s Harley on a pintail, his first of that species:

And here’s Jimmy goshawk about to catch a scaled quail: 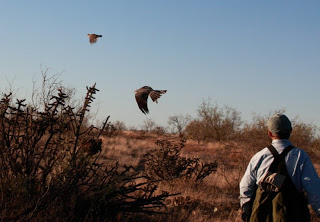 And finally a nice shot of Eric Edwards’ new passage peregrine waiting on above a duck pond. You may recall that a limited number of wild, first-year peregrines have been made available to falconers this year after a 4-decade hiatus in their use in American falconry. Eric was instrumental in arranging for wild take in Florida, which will happen next year; and this year he received a permit from Maryland to harvest one of about 5 allotted to that state.

The bird is trained now and has been chasing ducks for about a week:

 Petey was born late, the last of the lambs to be born this year. All the other lambs were older and bigger, and the small babe struggled to stay caught up with the herd – but she did. When she was about two months old, a bear entered the pasture where the herd was grazing and killed Petey’s mother. Petey became an orphan, but she still managed to stay caught up with the rest of the herd as it moved and grazed during the day. She was smart enough to try to be sure there were other sheep around her, so she would never be caught out alone. Since she wasn’t drinking her mother’s rich milk, Petey was skinny, but still, she was strong.

The sheep herd was moved out of the pasture that had the bear, so things were a little easier for the herd. The herd relaxed and spread out to graze along a meadow. Petey must not have been careful enough, because the small lamb was caught out alone. Petey was attacked by a fox. The fox bit her ear when it tried to grab her throat. Petey must have struggled, because she escaped with a mangled ear, and bites on her front and back legs. By the time we found her, she was getting weak. She couldn’t keep up with the herd anymore, but was still alive.

We brought Petey to the house on Thanksgiving morning, installing her in the front yard. She was weak and hungry, and seemed content to eat the weeds and grass in an unkept corner of our yard. We filled up a water bucket, and an oat bucket, and went back to the herd to get a companion lamb. Pea soon joined Petey in the yard, along with a bale of hay. Within a few hours, Petey had perked up. We think this girl has the will to live, and we’ll do what we can to make sure it’s a good life.

Petey and Pea will spend the next few days resting and being well fed before we introduce the livestock guardian dog pups to them. The bonding will begin and Petey, the tough little survivor, will have lifelong protection from danger. 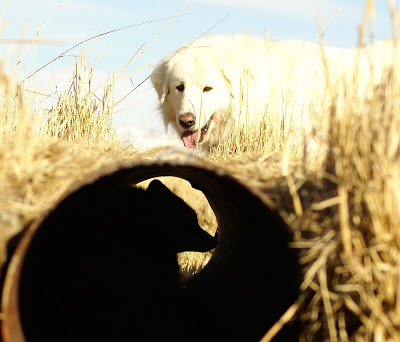 From the PO floor. I’m not sure what is funnier or sadder– a company that advertises usurious loans to people on welfare, or that it continues the process after it appears to know the subject is dead, even if it can’t spell “deceased.” 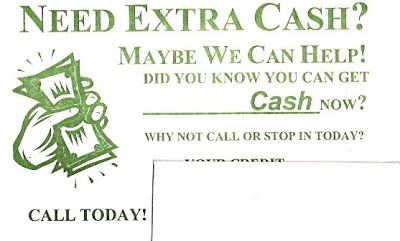 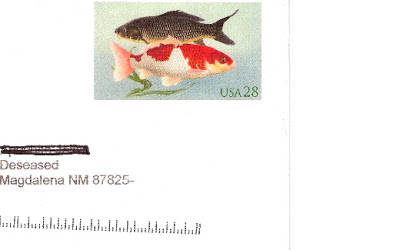 Larissa came to visit last week with the Peculiars. We ate and drank and danced at the bar and had fun. We also went to the rifle range. Here is a photo by Mr P of me coaching her with the .45; Mr P rather unkindly called it “Boris and Natasha”. She IS 6’2″. 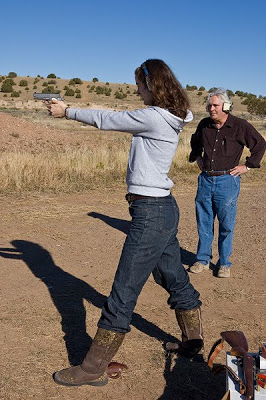 Here she is with the Best London Grant:

There are more and better photos, including one of her dancing with Lee Henderson (whose ranch we hunt on) at the bar, at her site here.

Irbis is HUGE and still growing. 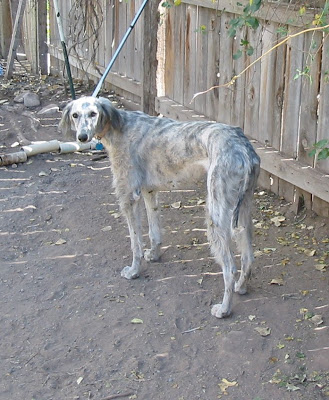 Last year’s problem bird BB (Bad Bird, Bird Brain) is this year’s delight (Big Bird). Now I need a pic of the Barb- Taita “Chicken” (nicknamed for her ferocious rushes at our feet– her real name is Fidget , after Vadim Gorbatov’s Peregrine protagonist). 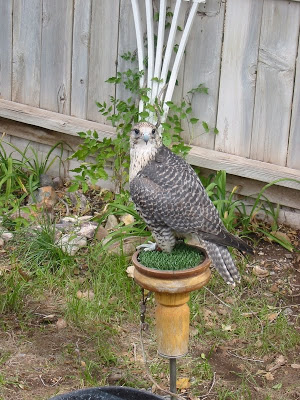 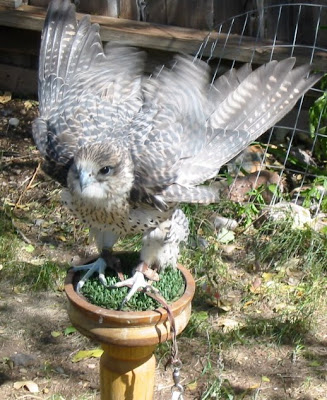 Via Patrick; an English ex- soldier will be sentenced to five years in jail for finding a gun in a trash bin and returning it to the police:

“(His lawyer) also showed jurors a leaflet printed by Surrey Police explaining to citizens what they can do at a police station, which included “reporting found firearms”.

“Quizzing officer Garnett, who arrested Mr Clarke, he asked: “Are you aware of any notice issued by Surrey Police, or any publicity given to, telling citizens that if they find a firearm the only thing they should do is not touch it, report it by telephone, and not take it into a police station?”

“Prosecuting, Brian Stalk, explained to the jury that possession of a firearm was a “strict liability” charge – therefore Mr Clarke’s allegedly honest intent was irrelevant.

“Just by having the gun in his possession he was guilty of the charge, and has no defence in law against it, he added.”

No doubt about it– England is Doomed!

Two posts from the excellent writer “Nagrom” at Rum and Donuts. The first is
an essay on an acquaintance of ours who died exploring one of the old mines in the Magdalena mountains (our mountain range probably has a hundred such– someone with the knowledge could doubtless cross the range underground). The second is a poem about his attraction to such hidden places. Read, as they say, the whole thing.