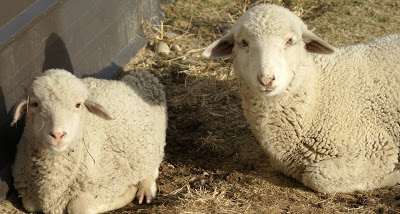  Petey was born late, the last of the lambs to be born this year. All the other lambs were older and bigger, and the small babe struggled to stay caught up with the herd – but she did. When she was about two months old, a bear entered the pasture where the herd was grazing and killed Petey’s mother. Petey became an orphan, but she still managed to stay caught up with the rest of the herd as it moved and grazed during the day. She was smart enough to try to be sure there were other sheep around her, so she would never be caught out alone. Since she wasn’t drinking her mother’s rich milk, Petey was skinny, but still, she was strong.

The sheep herd was moved out of the pasture that had the bear, so things were a little easier for the herd. The herd relaxed and spread out to graze along a meadow. Petey must not have been careful enough, because the small lamb was caught out alone. Petey was attacked by a fox. The fox bit her ear when it tried to grab her throat. Petey must have struggled, because she escaped with a mangled ear, and bites on her front and back legs. By the time we found her, she was getting weak. She couldn’t keep up with the herd anymore, but was still alive.

We brought Petey to the house on Thanksgiving morning, installing her in the front yard. She was weak and hungry, and seemed content to eat the weeds and grass in an unkept corner of our yard. We filled up a water bucket, and an oat bucket, and went back to the herd to get a companion lamb. Pea soon joined Petey in the yard, along with a bale of hay. Within a few hours, Petey had perked up. We think this girl has the will to live, and we’ll do what we can to make sure it’s a good life.

Petey and Pea will spend the next few days resting and being well fed before we introduce the livestock guardian dog pups to them. The bonding will begin and Petey, the tough little survivor, will have lifelong protection from danger.

4 thoughts on “A Thanksgiving story”