I traveled to Jackson again yesterday, and had the pleasure of encountering these juvenile trumpeter swans. The trumpeter swan is North America’s largest flying bird. Although not listed as an endangered species, trumpeter swan populations were decimated in the past and have made a long, slow return to healthier numbers, with western Wyoming’s Green River basin becoming a key area for this expansion. 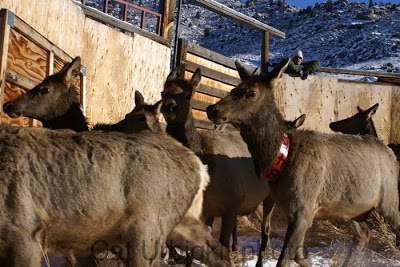 Was sorting through some images today, and came across a few I thought I’d share. 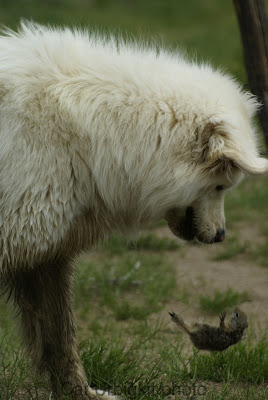 Yesterday, Pete called and said he’d heard there was a young bearded collie at the animal control pound in Pinedale, but he wasn’t going to be anywhere near the western Wyoming town. Jim was just outside of Pinedale, so he stopped in, and low and behold, look what came home with him last night. We’ll keep the five-month old pup for a few days while he calms down and learns a few manners (from Rena). Pete’s herders will put him to work and soon he’ll have a new mission in life. He sure is cute.

Last weekend we took the three pups out to our friend’s Midland Ranch, so they could finish the bonding process and head out to guard their first sheep herd on the range. Here’s a few images from the ranch. Doesn’t the chair look inviting? 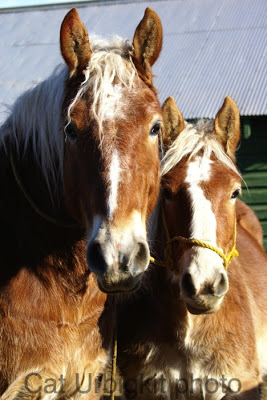 This is a Belgian mare and colt. The colt is dragging a lead rope, and mama fussed with it enough that she became entangled in it as well (which I suspect was her goal). There are several colts in training in the corrals at the ranch.

The first thing we saw is the last picture today. These young rams have been painted red, so they can be used as marker sheep (i.e., one marker for every 100 sheep, providing an efficient way to count a herd).

It’s difficult to describe the pride I feel to share this picture with you all.

My girls ran to me recently as I parked the car after work: “There’s a dead animal in the ditch. Come see! It’s SO COOL!”
Here’s B with with her prize find. Can anyone identify the dead beast? This looks like a job for Darren… 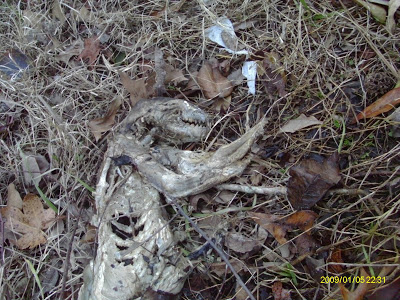 Sheri and I did the trip to Jackson for her weekly chemotherapy on Friday, and on the way home, encountered this very visible herd of bighorn sheep again. The weather has been mild, with little snow cover and the sheep seem to be enjoying it.

Jim and I are intrigued by Central Asia, and curious what we can learn as livestock producers from producers in other regions of the world, especially people who run sheep in wolf country. Recently we were doing research on Kyrgyzstan and saw an interesting reference to the small and stout horses they use in that country, called Kyrgyz Ate. These horses were on the verge of extinction, but a program has been put in place for their restoration, and now festivals are held to showcase these animals. The founder of the program was quoted as saying: “Some shepherds in the high altitudes still had this type of horse that is stronger, more economical, that can fight wolves.”

A horse that fights wolves? Kyrgyzstan has one of the highest densities of wolves in Central Asia, with an estimated population of 4,000 wolves. Without firearms, shepherds would run down wolves, clubbing them to death from atop their steeds.

Although we looked for more information, we found just a few other references to these horses guarding their livestock flocks and horse herds. A Social Sciences article by Nicolas Lescureux talked about the relationship between Kyrgyz stockmen and wolves, and this French researcher summarized the various ways wolves and humans interact and change behaviors in response to those interactions. He noted that the stockmen use a variety of methods to reduce the amount of wolf depredation on their herds, and added, “the ability of a stallion to protect its herd against wolves is a greatly appreciated criterion.”

Apparently wolf depredation on horse herds is rather common in both Kyrgyzstan and Mongolia. While sheep and goats may be corralled at night in winter, horse herds remain out on pastures, proving vulnerable to wolves. As an aside, the Kyrgyzs insist their horses are different than horses found in Mongolia.

After reading these enticing little morsels of information, our interest in Central Asia continues to increase. Oh what they know that we would like to learn …

We arrived back at the sheep pasture this afternoon to find a quiet standoff in progress. Two young bull moose were in the pasture, but the three burros were lined up in a row, forming a border between the sheep herd and the moose. What I love about this photo are the magpies on the butt of the burro in the middle. (Click on the photo for a larger view.) 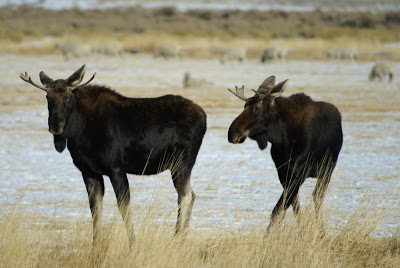 These two moose are well known in the sheep pasture. They’ve been lurking around on the other side of the river, watching me do chores, and sulking about the dogs not letting them into the haystack. The dogs leave the moose alone, as long as they keep their distance. Today was just another day in the neighborhood, and the moose finally went on their way into the next pasture.