My naturalization as a Louisianan must be near complete.  With two local friends and my hawk, Ernie, we recently made an appearance on chef John Folse‘s cooking show, A Taste of Louisiana.

The show closed a neat loop for me that began a couple years ago with the publication of my wife’s (one and only) rabbit recipe in Folse’s encyclopedic volume After the Hunt.  Along with Shelly’s “Breaded Rabbit Mullenix,” Folse & Co. included a surprisingly complete section on falconry in Louisiana, featuring photos of Ernie as a young hawk and a few of me grinning with fresh-caught rabbits. The book was (and remains) a best seller here, and being recognized from its pages by friends is a recurring pleasure.

Early last year I received a call from the Folse company with word that John intended to focus a season of his televised cooking program on the hunting and recipes featured in his book. I was invited to participate, and despite near-zero expectation of success, offered to take Folse and film crew out to one of my local hunting spots and see if we could do any good.

Well, we did some good and in fact caught a swamp rabbit right on cue as if the hunt was scripted. What’s more, the camera angles lined up, the light held, the flight was in focus and the crew was close enough to the action to catch it all on film. 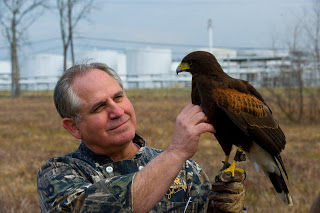 This segment (which the film crew referred to as “the package”) would be edited into the studio portion of the show to be filmed later. Having now filmed the kitchen segment and seen the falconry package on the big screens, I’m even more amazed. 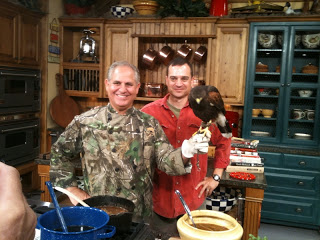 The complete episode will air locally in late September or early October and will be the first of about 35 half-hour shows featuring Louisiana cooking and hunting—activities long honored and well paired here in Louisiana. Next year, the series will be picked up by PBS nationwide. Watch for it, and bon appetite!

16 thoughts on “After the Hunt”