Lauren is coming home next week, visiting us soon, and will doubtless be blogging for herself.

In addition to training her eagle, she has done a lot of research,and to my envy got to meet the chronicler of the Gyrfalcon, Eugene Potapov, author of my favorite ornithological monograph (see link two posts down):

” I saw on the blog your discussion on Sakers. I just thought I’d mention that I ran into Eugene Potapov at this Asian Raptor conference. He is undoubtedly, one of the coolest people I’ve ever met. I really enjoyed talking Goldens and Steller’s with him, and the hazards of field work in Siberia. He is also hilarious. After I told him what University I went to, he says, totally deadpan, “Lauren, I propose a study, where we go to this Oak-luh-homa, and measure the redness of the necks.”

Speaking of “redness of neck” she also went out to Olgii to say farewell to our old friend and drinking buddy Aralbai, the hardest- core of eaglers, and also to pick up a new baby for him to train and release his ten year old to breed, as is Kazakh custom. (The birds live thirty or forty years). That’s him with the Mongol cowboy hat. 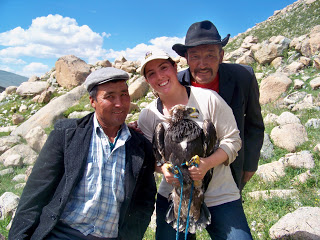 “Aralbai looks like a total cowboy out there, on his horse scouting for eagle nests – I didn’t feel that far from home!

“Here is one more photo, when we released a 10 year old female back into the wild. She was trapped as a turnik, a two-year old, and subsequently flown for eight seasons, taking many foxes. I felt privileged to wave goodbye to her, as she went back out into the wild. That’s falconry!” 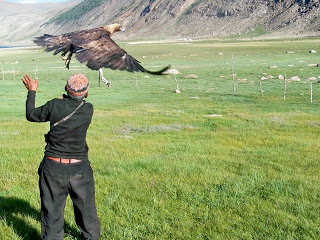 8 thoughts on “Beginnings and Endings in Mongolia”