At the end of the day it is hard to type and I want to go to the Spur to meet Lib. It has also been effin’ FREEZING, never good for PD. Which is my excuse for quoting from a letter to Brett Booth of Demonpuppy instead of writing an essay.

Anyway, I made one old point I would still back. Which is:

“I once said [1970’s] my ideal curriculum would consist of biology, history, the classics, and how to use a chainsaw. Adaptable to region and culture but you get the drift…

“I now think I would add how to train a dog, hawk, or horse.”

Not all “country” music is unsophisticated or even American. Here I give you a bunch of stuff I have been working through and following. Let us start with Tom Russell’s classic “US Steel”— a straight- up traditional country lament complete with sweet pedal steel, but set in Pennsylvania rather than on the border or even Appalachia, full of sad images of decaying industry. I sent it to Marty Stupich, who worked in and documented that mill in the 80’s and now is photographing the abandoned smelter in El Paso, and to Retrieverman in West Virginia, who has been musing on such things. (I also suggested he look at a pre- doctrinaire Steve Earle in the stirring if slightly sinister “Copperhead Road” — a mini- movie with echoes of Thunder Road. Rednecks strike back…)

Which suggested in turn Show of Hands’ poignant “Country Life”. No jobs… no pubs… even in the American west, are we following England down?

The next jump almost leaves the tradition– Show of Hands provides the soundtrack to a traditional, rhyming poem turned strange, a very dark contemporary Christmas tale by Charles Causley, but the images in this version are adopted from Anime! I think it works. Causley changed Herod, the archetype of an arbitrary wicked king, into a more contemporary bogeyman, a sort of supernatural child molester, and put him in the English countryside. SOH gave him a soundtrack that stands at least MY hair on end. And the animator covered all this and added an apocalyptic edge– look at the sky and feel the wind over the line “…melt in a million suns”.

Enough doom! End your tour with “Longdog”, a merry tale of a merry poacher and his lurcher, also by Show of Hands; a hunter- gatherer, a “Municipal Paleolithic Man” in action. If dogs are outlawed only outlaws will have dogs…

Two signs encountered by Sir Terence Clark in his travels. The first, which he is pointing to, means “female saluki” (I know Terence through the dogs– he is another scholarly dog traveller). It is in Tunisia.

The second is in Kashgar–the Chinese consider our noses huge. (The Han at least– I rather doubt the often hawk- nosed local Uighurs do). Betsy Huntington was born in China (as was Libby’s mother– actually connections!) She often said that the first thing she learned from playmates was that her nose was too big. 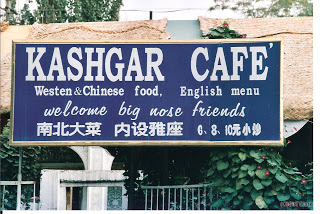 From the Essays of Montaigne:

“The men who serve us do so more cheaply than our falcons, our horses or our hounds, and they are less carefully looked after…what menial tasks will we not bow down to for the convenience of these animals! The most abject slaves, it seems to me, will not willingly do for their masters what princes are proud to do for such creatures. When Diogenes saw his parents striving to purchase his freedom he exclaimed: ‘They must be fools; my master looks after me and feeds me; he is my servant!’ So too those that keep animals can be said to serve them, not be served by them”.

A classic Indian miniature from this site, circa 1800, sent by Jess at Desert Windhounds. As Brett says, it is either the biggest tazi or the smallest handler EVER.

The storm is coming. We can feel it. I can smell moisture in the air. The wide open sky is a beautiful overcast shadow above us, providing just a casting of blue and gray hues across the landscape.

We moved our sheep herd, burros, and livestock protection dogs back down into the river pasture where the old trees will provide shelter from the coming snowfall. It’s snowed just a little today – about an inch, but this is the prelude to something bigger. The herd enjoyed a snack of whole oats mid-morning, while the dogs were given large beef bones to keep them busy.

As we wait, we notice the wildlife is doing the same. A small bunch of mule deer bucks moved onto the ditchbank just above the herd, and about 1/2 mile south down the ditch, a pair of bachelor bull moose have taken up their position as wildland sentinels. 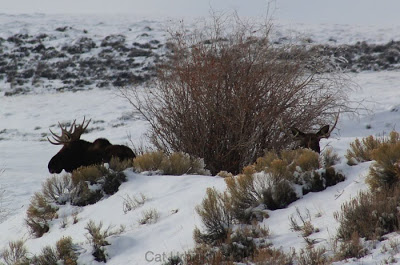 We wait for nightfall, the arrival of the snowstorm, and the new year.

It is late at night but I don’t THINK this is a hoax.

“Though he was famously a fan of Big Macs while in office, Clinton turned to a vegan diet this year for health reasons in advance of his daughter Chelsea’s wedding in July and has continued to forgo meat and dairy ever since, PETA’s Campaigns Assistant Media Manager, Amanda Schinke, told POLITICO via e-mail.

“The former POTUS has publicly expounded the virtues of veganism and has said he’s lost 24 pounds on his plant-based diet.

” “Bill Clinton won not only because he’s the most prominent person to go vegan this year but also because he used his platform to articulate the reasons why a plant-based diet is the most healthy diet,” said PETA Senior Vice President Dan Mathews. “And of course, it doesn’t hurt that he has Chelsea’s lead to follow. She went vegan at 10, though her motivation was simply not wanting to support cruelty to animals.” ”

In today’s philosophical climate he is a “moderate”.

About a year ago, before chaos struck (or at least was diagnosed), Libby commissioned Carel Pieter Brest van Kempen to do a watercolor for my birthday. Someone asked if it would be a raptor. I was almost offended- every falconer in the world is inundated with such images. Given Carel’s eclectic tastes, I opted for a favorite insect– the desert meloid known as a spider beetle. Here is a preserved specimen: 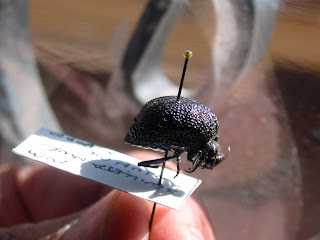 And here is the perfect lively painting:

Such a nice polite pup under the Christmas tree, right? Appearances can be deceiving – this is Hud, our new herding dog pup, arriving a week ago. We’ve had some heartbreak in our lives this last month, so the addition of two kittens and a pup have been very pleasant distractions.

We named the kittens Brad and Matt, and right now they are house cats, as we begin the process of teaching our outside livestock protection dogs not to eat kitties. Here are the kittens enjoying a beef bone for Christmas.

Although our older dogs (Rena the guardian and Abe the herding dog) are adjusting well to the kittens, Hud hates sharing, and gets especially annoyed when Matt tries to steal his chew toys.

Hud threatens to bite Matt while they lounge on the couch with husband Jim.

Matt reaches out from the protection of Jim’s arm to slap Hud back into proper behavior.

The two brats compete for the spot next to me on the couch. Matt will not leave Hud alone, following him around, insisting that they are going to get along.

Since he gets in trouble for biting, Hud tries posturing to impress the kittens.

Posturing continues. Brad is the gray kitten, and he does not like Hud. 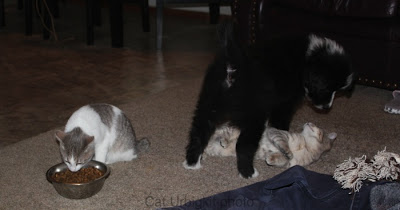 Brad is apparently a fairly smart kitten, since he quickly developed an allegiance with the biggest dog in the house. To heck with that pesky Hud! 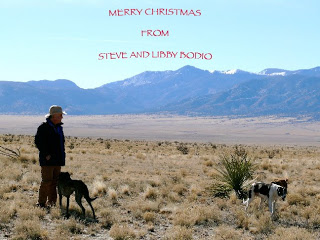