Meanwhile Teddy Moritz’s dogs are climbing tall trees in pursuit of squirrels with their avian partners– that is a dachshund up there, not a Harris hawk! And she tells me he had gotten all the way to the end and was returning… 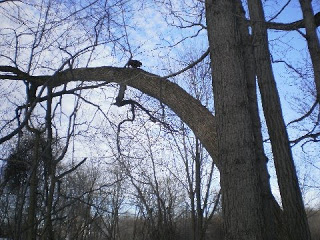 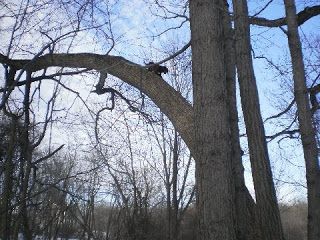 Paul has suggested I take back and fly my sweet Barb Taita female, the mini- shahin Cheetah (formerly Chicken as in Chicken Little), while he takes up Ms Mean Girl and attempts duck. We are both happy, as our respective quarry better fits the recent switch.

One “trouble” with red shahin types is that they are very fast but have very heavy wing loading— look at the thin wings in photo two as well as the huge chest. Paul has found it hard to keep her fit without constant work. A new book on modern Arab technique cites stooping a Barb to the lure 250 times or more–! That kind of workout should keep us BOTH fit. 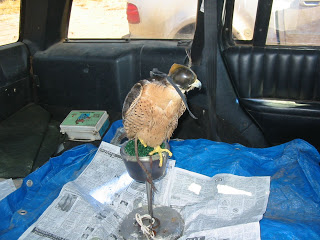 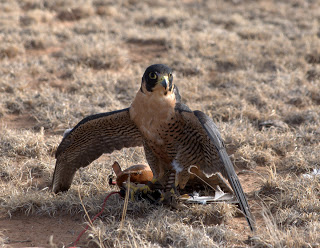 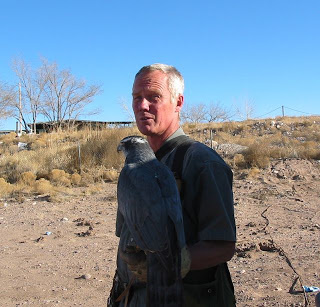 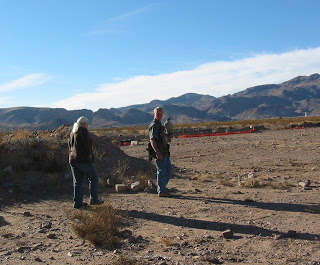 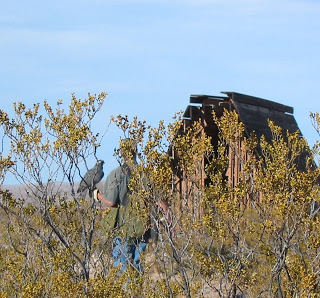 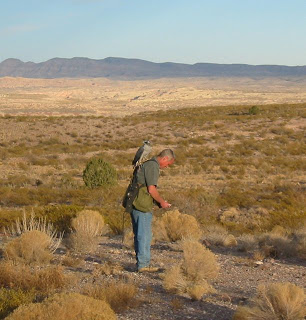 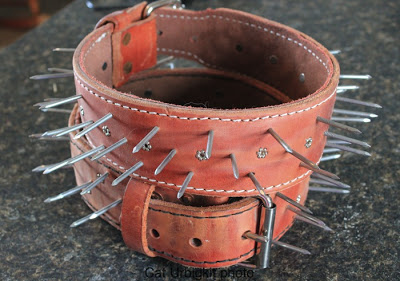 We’re going to experiment with a variety of spiked collars on our livestock protection dogs, but these leather collars we had made locally are a good start in protecting dogs during a wolf attack. We saw various versions of the leather collars used in Spain. For livestock producers who want to give them a try, saddlemaker Clark Weber of Rock Springs, Wyoming is the man to talk to. His cell number is 307-350-5408 and his email is mudtwo at hotmail dot com.

Clark made these two collars for our dogs based on the measurements we specified. They are 2 1/2 inches wide, and adjust from 22 to 26 inches.

Found items from hawking trips this year, both apropos of their settings: the first, a mesquite limb from a desert pasture north of Amarillo TX and the second a cypress knee from a bayou in the heart of Cajun Louisiana. Can you guess what spirits they possess?

– Posted using BlogPress from my iPhone

The peregrine (who I sometimes call Bella II after an older bird of the same breeding I once had, who moved to Utah ended up killing five- pound sage grouse though she only weighed about what this one does, 23 ounces) is pretty well trained now. She even has good manners. She never screams or “mantles” over her lure, which she responds to quickly. She happily steps off it for a tidbit.

What she is not is particularly friendly. She rarely ‘tips’ or tilts her head in a hawk’s gesture of friendship to me (sometimes to the dogs especially Taik, sometimes to Lib; THEY don’t ask her to do anything!) She hoods well but with her peculiarities; I tell people after she eats: “She’ll bate [jump] once, then squawk at the sight of the hood, then accept it, though she’ll bite my finger before I tighten it”. She amuses all but me by never disappointing.

The one thing she absolutely loves, though, is her shower. I started soaking her with a spray bottle when she was in her first training to cool her down, still hooded– a common enough ploy. But when she got the ease to stand around without wearing her hood for a while (she still ‘needs’ it more than I like because, unfed, she is more restless than most hawks who have lived with us in her situation) she fell completely in love with the experience.

Look at these photos– ecstasy! She spreads her wings, bows, trembles, covers her eyes with her clear eyelids, drinks, rubs her beak on the perch, repeats, soliciting again and again until she is drenched. In an hour she would do it again,and even a third time if there were enough hours in a winter’s day. 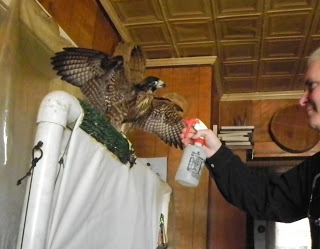 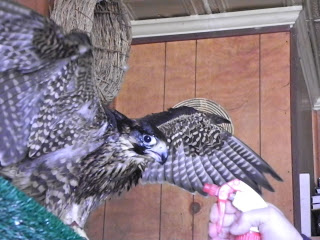 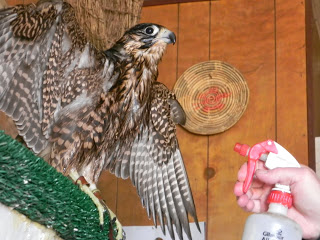 Eventually she should probably move on, as we have no proper game close by and cannot afford to feed “pets”. She is the potential duck hawk her anatum half (the other is Barbary) implies, if ever there was one, needing only consistent pigeon work. But hunting ducks would mean a 40 mile drive each way; with three narcoleptic periods a day from meds plus an arthritic hip driving that much is not high on my list right now.

I need close- to- home birds that neeed little or no driving– a gos or Harris male, a little tiercel longwing brought up to our quirks and with our dogs (our Barb- Teita, now in capable hands, had the right size and upbringing, but when I gave her away I couldn’t walk 100 yards and thought I might never; now I can hunt hard for two consecutive days without hurting more than my back!) Nor is she entirely happy living in the intimacy our ‘lifestyle’ demands, though most US falconers wouldn’t even notice (newer readers see last two older pix for why).

So if you think you might have ducks for a water- loving bird: you know where to find us. 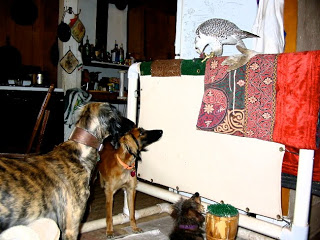 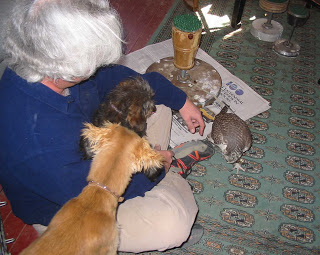 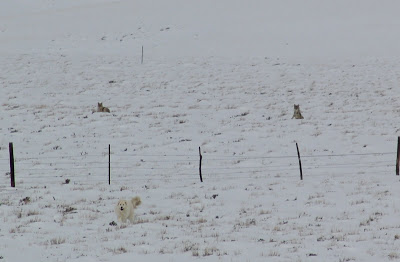 This cold and blustery day started with me letting Hud the herding dog puppy outside to find a dirty-headed bald eagle sitting on the power pole, watching the goings-on in the yard. Okay, so I put the big dog out with the little dog as a precaution.

Morning proceeded, and I noticed Rena the guardian wasn’t staying close enough to the house to entertain the pup. How come? These two tricksters (click on photo for larger image) had come through, attempting to lure Rena out the back fence and onto the Mesa big game winter range. Rena is a lovely dog, but how I wish she’d grab at least one of these two coyotes. Now we’ve got a game where the Mesa fence is “safe.” Grrr says me. Maybe I’ll try to pop one with something more than a camera.

Our sheep herd will be moved here to the house in a few more weeks, and with them come the guardians with less tolerance.

“I call it dogwatching, just like birdwatching for some. We all are dogwatchers, no matter, hunting, or not.”

From Teddy Moritz: Garmin, a young longhair dachs, working rabbits with an experienced Harris on crusted snow. Good birds make good dogs and vice versa. And: I need a Harris, at last. 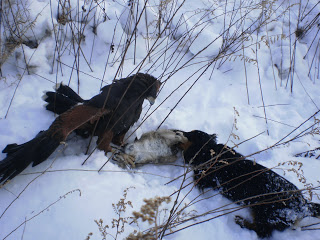 Unseasonal cold weather (down to nearly – 30 or as people are suddenly all saying “NEGATIVE” 30 F at night) has curtailed outdoor activity but there have been everything from house emergencies to deadlines to unexpected trips to Santa Fe, all taking their toll on the blog. I hope regular service can resume– I have a ridiculous amount of linkage saved and will never catch up soon. Onward!

A video of the galgo hare coursing championship, from a Spanish hunting and fishing show (see opening clips), courtesy of Gail Goodman. Can you imagine such a show in the US?

Cultivation of the bird’s- nest soup bird, courtesy of Arthur Wilderson, who writes: “I wonder what might be done to further enhance the productivity of such sites. A ban on the use of pesticides in the immediate area might increase insect densities and so support more birds. I could see some sort of anti-predator campaign too, if the native birds of prey haven’t been long since wiped out… Then you’d start selectively breeding the swiftlets for maximum nest production, and the cycle of domestication would begin anew.”

Maybe such efforts are the reason you can get authentic “nest” as an ingredient in soft drinks– in Albuquerque! 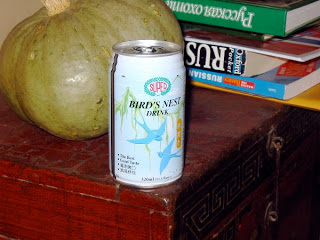 Nabokov was right! 65 years ago, working solely by close observation of morphology, he predicted we would find that New World “blue” butterflies invaded in five successive waves from Siberia and radiated out, evolving into many new species, all the way down the Andes…

DNA has just proved him 100% correct, in both theory and detail. The story is both a triumphant vindication of Nabokov, who was often sniffed at by entomologists as a dilettante, and a classic demonstration of close observation and traditional taxonomic methods– one that shows that, done right, they still work.

$200,000 racing pigeons going to China, where they seem to want to exceed our excesses. My father and his business partner, a banker, spent what then seemed like a literal fortune to bring a winning strain from Europe in the early 60’s, but this seems crazy. As Betsy Huntington used to say (adjust for inflation): “Never pay more than one thousand dollars for anything that can DIE.”

It appears that bacon is a gateway drug for vegetarians.

Screw the political correctitude of the moment: as Carl Zimmer says, Pere David and his ilk were heroes. (And sorry, science as we know it is western. As Pat Hemingway says, Islamists use jets, not flying carpets).

They have made a movie out of The Long Walk. I don’t really care if the story is 100% true or not.

Coyote- hunting longdogs from Kansas, from a good blog new to me. I’ll be checking it more.

Medieval falconry video: somewhere in eastern Europe, a gyr (gyr hybrid?) kills a heron dead in the air with one blow. There is rumored to be more including cheetahs…

Next, dog & bird; tomorrow, more birds among other things…? 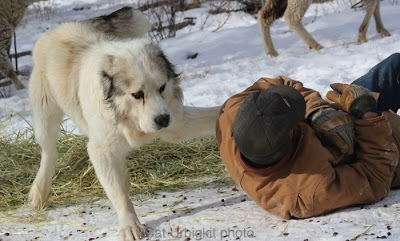 No the man is not about to be eaten by the dog! That’s our Aziat Rant, giving husband Jim a love tap while they were wrestling around on the ground after we fed the sheep today. A look at the muscling in his front legs demonstrates why these dogs are famous as wolf wrestlers. Rant had already done the scratch-my-belly submissive play with both Jim and I, and was thrilled when Jim hit the ground too. Rant is such a serious guardian, and it’s great to watch him engage in pure puppy play. 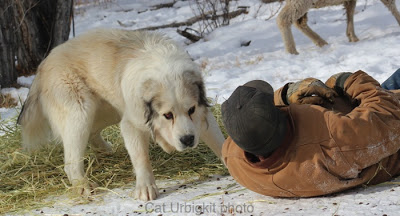 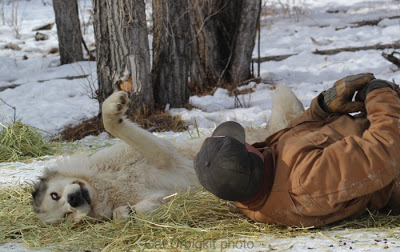 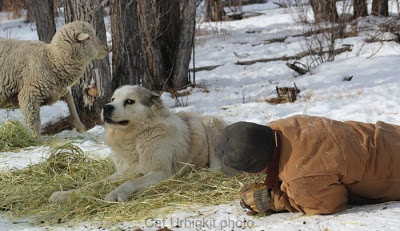