I had hoped to attend, but when I realized I couldn’t get to Tom Russell’s show in Kansas City I contacted my friend on the spot, honorary Magdalenian Jennifer Wilding, and inquired whether she would be interested in “covering” it for Q- blog. She was, and took her friend Rick Malsick. Turned out Tom was new to them, but it didn’t hurt their appreciation (or understanding) a bit. Rick:

“I wasn’t familiar with Tom Russell. Come to find out he wrote Outbound Plane, a damn fine Nancy Griffith song. But I didn’t know that going in. Anyway, impressions. Wish I’d been taking notes. First, there was the sign at Knuckleheads imploring patrons to muzzle their cell phones and to keep quiet during the performance. Singer-songwriters have to love that. Then there was the music. The collaboration with Thad Beckman was very tight. I have to believe these two have spent some time together. The guitars were always is sync, even when the rhythms were tricky, and the vocals were always in harmony. But the most powerful impression was the songwriting. These are songs for smart people, with the right blend of sincerity and irony, pathos and humor.

“Moreover, his songs take an inductive approach, telling stories of individuals – the aging fighter, the guy stealing electricity, the dude who loses everything in a cockfight – in such a way that even those at great cultural remove can feel the pain. Finally, there was the audience. Many were longtime fans and Tom’s rapport with them was as funny as it was loving. It’s good to know that there’s a fan base in KC for this kind of first-class music.”

“For me, Tom Russell made the evening all about appreciation. His appreciation for his friend, the [Kansas- born–SB] writer George Kimball, who was in the audience, for the Knuckleheads staff, for his most excellent musical collaborator and for his audience. In return, Russell got a whole lot of appreciation back. My favorite moments were the two times he launched into songs, being absolutely certain that the audience was going to chime in for the sing-along moments. It was like he had leapt into the audience, counting on them to pass him overhead from person to person, but he never left the stage.”

Almost forgot– someone suggested I link to my Amazon Wish List. If nothing else it and its commentaries might give you an idea where the blog may go next.

Tired but can’t resist. From Churchill:

Michael Pollan thinks the recent attacks on “foodies” and gluttony may be in part the product of an unholy alliance of Big Ag and stealth vegans– really! For the record, for the past couple of years I have begun to suspect that The Atlantic has a stealth AR agenda– something that would be less harmful if it were overt. The “new” management did tell me in blunt terms I could no longer write for them as soon as they came on, which I thought a bit odd as my last piece had won an award and been short- listed for another…

Dog “wrestling” (I would not call this virtually bloodless sport, used to test the bravery of flock protection dogs like Cat’s throughout Central Asia, dogfighting) in Afghanistan. Actually Time– surprisingly?– pretty well gets it.

A visually stunning video of peregrines over London, if one that doubtless relies a lot on computers; HT Tim Gallagher and Walter Hingley.

Belyaev foxes for sale! I WANT one. Sy Montgomery, who sent the link, does too, but is afraid it might eat her “girls” (chickens). I fear my girls might eat the fox.

Last, a link to an Amazon reviewer, whose enormous body of work on everything from hot snakes to the glass flowers at Harvard I have barely tapped, but who is going to cost me money– a New Mexico biologist who has interesting things to say about almost everything.

Our female Akbash livestock protection dog Luv’s Girl, gave birth to seven pups a week ago. We’ve been trying to leave the pups alone, but it’s hard to do. They are round and growing, and all is well.

The sire, or sires, are Central Asian Ovcharka. Rant, and his nephew, Mikey (an Ovcharka/Akbash cross).

The dark pups will probably grow up to be light tan or even reddish, like Mikey, shown below. 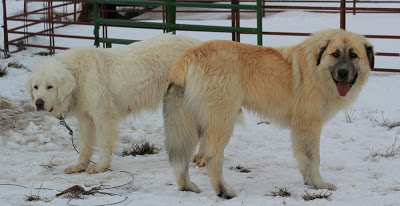 Peculiar notes with approval a new edition of Frederick Turner’s first (!) epic, The New World, which takes place in a not too distant future. Nice cover too.

Fred is one of the too-little- known wonders of our time. The breadth of his erudition and what he takes on for poetic subject matter (evolution, terraforming Mars– all in meter of course) exceeds that of anyone I know. Channeling Darwin here, from New World (emphasis mine):

We are the holy and dangerous beast who dared
to domesticate not only our plant and animal servants,
but also ourselves: and not for usefulness only
but chiefly for beauty, the blazon of expressed shapeliness.
And so the heroic hang of the Great Dane,
the pretty baroque of the King Charles Spaniel,
the deathlike elegance of the Siamese cat, the fire
of the fighting- fish, bulbous flash of the koi, pout
and delicate feather of pigeon and dove that Darwin
admired, crimson petals of rose and peony,
are only attendants on the sovereign differences given
to this clan of mutated monkeys, to itself by itself.

From an essay by Jonathan Rosen (author of the highly recommended The Life of the Skies), in an essay in Richard Barnes’ Animal Logic, which I recently posted on:

“All this talk of artificiality mingled with reality might seem like mere aesthetic maundering except for the fact that artificiality isn’t something imposed on human existence, it is something bound up with it…In other words, the artificial is natural when it comes too human beings. King Lear may shout ‘off, you lendings’, in an effort to strip down to the bare essentials, but human beings are in certain ways never naked.”

Dr Hypercube recently mentioned the excellent book Tales of the Himalaya: Adventures of a Naturalist by the late Lawrence Swan of Darjeeling and California. I would have loved to know Swan, who climbed and collected all over the mountains and valleys I long to see, and may have been the last in a long line of Europeans (so to speak) who did so. I envy them!

All things Himalayan are touched on with wit and knowledge– the geese that fly over Everest, the abominable snowman (he is skeptical but someone I know– Libby actually– has seen odd tracks); the frogs that illustrate the collision of continents; the aeolian zone; the abundant hordes of relentless leeches (Libby confirms with a shudder, forty years later); the quirks of Sherpas and climbers. Recommended highly by both Diary of a Mad Natural Historian and Q, backed by L who has had the boots- on- the- ground experience (I’ll find a photo).

I don’t know whether it is sad that Tales is a Print- On- Demand title or that POD is exactly where good quirky books are going– if so, all the more reason to buy.

The book also features a delightful chapter on Himalayan pheasants, especially the surreally beautiful Tragopans. These birds are my favorite creatures other than raptors and tazis, and in my opinion the most beautiful birds in the world, beating out such showy contenders as birds of paradise. Swan kept them, and was lucky enough to see their courtship, where they extrude a weird “bib” of blue and red, and grow horns. What perfect dinosaurs! 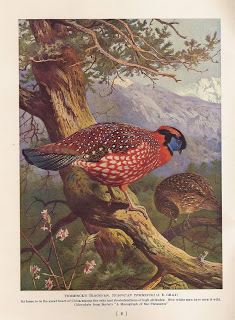 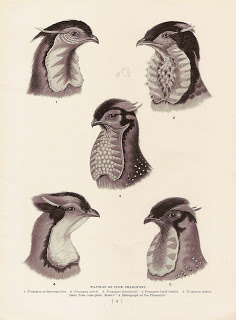 These paintings are from William Beebe’s Pheasants, Their Lives and Homes, which chronicle his pursuit of pheasants in the early decades of the twentieth century in places like the Himalayas and Burma and, with the works of Roy Chapman Andrews, jump- started my life’s obsession with Asia and its creatures.

Getting the “Gallo de Cielo” painting below from Tom Russell jogged my memory and made me dig up some photos from the early 80’s of my late mentor Floyd Mansell, his proud roosters, and one of him hunting with me and his then teen- aged son Phil (whose daughter is older today than he was in the photo).

Of Floyd (who appears in many scenes in Querencia- the- book) I wrote to Tom:

“Found these 1984 photos by Betsy Huntington of my late mentor Floyd Mansell and his roosters I thought might be of interest– historically anyway!

“Floyd was unusual. Arkansas hillbilly by origin (though half Lebanese in addition to Scots- Irish– there is a strain of Irish gamefowl called “Mansells”), he ran off to war in the Pacific at 16. Then returned, went to college and got a master’s, “turned liberal, became a Catholic, and married an Indian. My family still doesn’t know what to think!”

“He moved here in the 60’s to work for the BIA, taught, coached, and was at one time or another mayor, principal, baseball coach, and guidance counselor. He was a Golden Gloves champ and a serious amateur boxer and taught that too. His politics if not culture never wavered from well to the Left of mine, but he remained not only a naturalist of daunting knowledge and skill– several academic papers cite him– but also a hunter, gunner, bowhunter, sighthound man (my real teacher there) and as long as it was legal and before the advent of brutal “slashers”, cockfighter. As a boxer I think he identified with the gallos.

“He raised ten kids– nine of his own, one a grandson he adopted– with his half- Navajo, half Choctaw wife Wanda who is still around and still a friend. I miss him.” 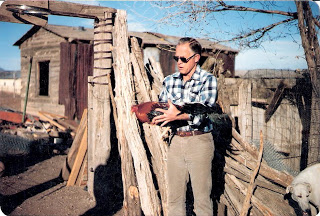 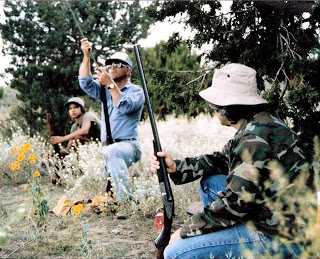 Phil was shooting a Mossberg pump with the casual ease, accuracy, and arrogance of a young natural; Floyd an Italian- made version of a 19th century caplock double. I had the kind of gun I never see anymore: an LC Smith Ideal grade 12 on the light frame that neither weighed much (even with 28″ barrels) or cost much. I shot it well; made a terrific long shot toward the end of that day that culminated in my wading an arroyo flood to retrieve the bird after a sudden thunderstorm. I sold it, of course… 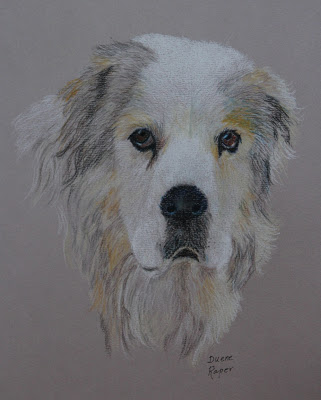 How cool is this? Talented artist and friend Duene Raper of Pinedale asked me for a good photo of livestock guardian dog Rant a while back. The other day she mentioned “Rant is hanging on the art room wall” at the senior center, and I was welcome to take the piece home if I liked it. As soon as I saw it, I snatched it off the wall, showed if off, and brought it home. It’s beautiful and Jim and I love it. Thanks so much Duene!