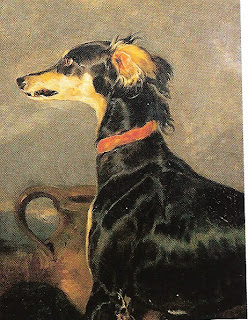 Terence Clark sent a fine Landseer portrait from the 19th century of what appears to be a female saluki– or, better, tazi; actually to my eye the dog seems eastern, Asian, even specifically “Turkmeni”. She is doing the rarely portrayed “propitiating” smile and but for color resembles Ataika I think. Terence said, quoting the Country Life article, that it was a portrait of a dog called “Eos”, a favorite of Victoria’s, and could better be seen at this gallery.

Jess at Desert Windhounds was puzzled– like all of us she is curious about what one might call non- traditional saluki provenance, and this one and the name Eos seemed disconnected:

“Eos was a greyhound belonging to Prince Albert, brought with him from Germany.”

Terence suggested the dog in the painting might be one of two “Indian greyhounds”– salukis– that the younger Prince Albert (King Edward to- be) brought back from India in 1876, but Jess reminded him the dog in that painting couldn’t have been one of the Indian salukis because Edwin Landseer died in 1873.

And why should we care? I do, at least, because with increasing efforts by scientifically illiterate breed fascists to restrict the term, and all legal breeding, to the descendants of forty- odd Arab dogs randomly selected by British colonial administrators in the early 20th century (apologies to Terence, an Arabic- speaking former diplomat who does NOT believe this!), we need all the evidence we can find of the high- quality “metapopulation” that runs from North Africa through Central Asia. Jess is on the track:

“According to The Year-book of Facts in Science and Art, John Timbs, 1839, from 1830 to 1837 eleven Persian Greyhounds [emphasis mine– SB] were bred or kept in the Zoological Society Gardens. Which wouldn’t include dogs in private hands.

“The Book of Sports, British and Foreign, 1843, has an account of Zillah (who was black and tan though I’ve never read that Landseer painted her), and mentions that at that time there was a dog at the Zoological Society Gardens, and one owned by the Duke of Devonshire, who owned several Landseer originals, and had one of his own dogs painted into “Laying Down the Law.”

“I can find a record of a Landseer work called “Persian and Greyhounds” from 1837, but no image online.”

Does anyone have any leads?