Lauren at 17 in Olgii with Aralbai

With Aralbai, classic Kazakh cowboy, and his new eagle just before her return.

More Boston. A good person- but she did not approve of my encouraging a young woman to go to Mongolia,and I am not sure I ever convinced her… 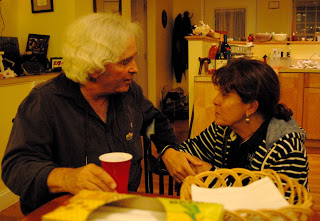 VERY grumpy. Two deadlines down and a big one still to go. I need a weight machine; more, to GET OUT. But duty calls…

(On racing and boxing, grumpy):

“Riding horses to exhaustion and punching each other in the face under agreed rules are worthwhile and manly pastimes, far better pedigreed and infinitely more exciting than hitting balls with sticks, tossing leather bags across a field, or chasing a puck around on ice.”

From the always reliable XKCD, via Jonathan who just emailed that he was in Nairobi impatiently waiting to go out in the bush. We should all be so lucky as to have THAT cause for impatience!

Irbis preparing to bolt for his kennel because he is being photographed (by R. A. W.).

I have been neglecting my blog family. Check the sidebar for new additions to the blogroll- Border Wars, and my neighbor (forty miles on dirt roads) Morgan Atwood at Rum & Donuts, who has abandoned his pseudonym “Nagrom”. Also, LoARSqred, partner of MDMNM of Sometimes Far Afield, has moved with him to Small City NM where she too has started a blog, A Seemingly Stochastic Life, full of gardening and hunting and good food (I think MDMNM has been too busy to blog).

Have you seen Neutrino Cannon? Scarily erudite and fiercely opinionated– and more often than not, right– on a daunting variety of subjects. Check his interests in his profile…

Darren of Tet Zoo may be blogging more than ever but has moved to Scientific American Blogs, where I hope he is getting the recognition he deserves.

A few particulars. What on earth are “conventional” breeders doing to dogs? Christopher at Border Wars muses (angrily) here and here.

Excellent essay by Paul Theroux on the PLF blog (originally from the Financial Times) on why there is still plenty of good potential travel writing. Need I say I agree? I actually quoted Theroux in Eagle Dreams.

Here is a strange one: exactly how weird were the popular cartoons and at least some music in the Thirties? I submit that the psychedelic Sixties had nothing on them. Following my whimsy after watching a jolly YouTube of Fats Waller doing “This joint is jumpin’ ” at NC (In the thirties “…everyone dressed up for parties, or just dressed better back then…[and] “weapons carriage was apparently considered normal”, I went looking for some remembered Cab Calloway songs with cartoons.

Oh. My. God. NOTHING prepares you for good music linked to the weirdest cartoons you have ever seen. Snow White parodies with Betty Boop, Bimbo the Bear, murder attempts, and Cab Calloway as not one but two cartoon characters singing St James Infirmary over the apparent frozen corpse of Betty–! Koko the clown turns into a ghost for a while, while singing and moving like Calloway, transformed by the Wicked Stepmother. But why are all the characters floating down the River Styx on an ice floe past skeletal and spectral card players (aces and eights), musicians, broken- down cars, and even barflies, though the container on the bar is marked “milk”, while owls and demons and what appears to be a large spermatozoon fly overhead?? And why at one point do Koko and Bimbo try to beat up a tree stump?

And that is the LESS weird video. Next, try this one, where Calloway starts live with his band singing Minnie the Moocher but shortly pops up in the underworld again as a cartoon GHOST WALRUS, menacing Bimbo and Betty as ghost wardens execute ghost skeletons in electric chairs to much hilarity and little effect, while a scat- singing nursing cat and her kittens join gleefully in on the chorus. The end reminds me (seriously) of Goya’s skies full of hellish creatures, and also that the thirties cartoonists were hyper- literate and cultured and amused themselves inserting high- culture references everywhere. (A later example: “Kill the wabbit, kill the wabbit…”)

It is a shame that they are hard to find today except on YouTube– too un- pc by miles– but we are lucky that they still exist there. On the other hand Max Fleischer and his brother and his associates may be in part responsible for the weirdness of my generation- I saw that first one often as a child, and God only knows what else!

Apologies (Chas!) for the info dump but I have both a book and a review deadline looming plus have written an essay on my friend Peter Bowen’s novels that may soon be linked here– this after travel and PD slow typing. I needed to put out a little or I would never catch up.

One more though: despite my Scots maternal blood, they will never get ME to wear a kilt, but check out and help Stingray’s (and others) Kilted to Kick Cancer campaign.

Malcolm Appleby, the engraver and metalsmith who engraves guns as animals and canvases for his fantasies as well as an amazing array of other things– objects, drawings, and more— is probably best known for his Raven Gun in the Tower of London, though I wish they would display it better, not in a dark inaccessible corner as it was the last time I saw it. Here is my scan of a brochure showing it– sorry for any lapse in quality between pamphlet and scan. 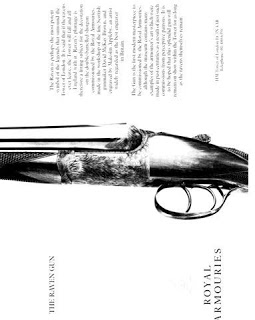 After Betsy died in ’86, he made me a wonderful belt buckle of old Damascus washed in silver and gold, a “bird of prey with a heart”. (Click to enlarge).

A visiting member of our blog tribe– will link when he gives permission, as many of us prefer to remain anonymous or at least pseudonymous– took these photos of it backed by Doug Tate’s excellent text on Appleby in his book on English master engravers, British Gun Engraving, and by photos of the Raven and Crocodile guns (does anyone know if he ever did the promised “Merlin”– falcon– gun? I have lost touch).

Just for fun– the cover of a small Mongolian pb treatise on Eagle Hunting (in Mongolian– can’t read a word of it) that I found as I dug deeper into the library.. Sure, it is sort of Soviet- influenced I suppose, but its bold vivid block print style is still striking.

Here is the 1987 (see ref to Betsy’s death) letter from “James Bond’s Armourer” praising the Model 12 that I promised last night– click to enlarge, twice if needed. Also notice that handguns were still legal in England then…

Jim and I decided we were ready for a night out, so on Saturday evening we took a bottle of wine, our sleeping bags, and dogs, and headed for our sheep pasture. Jim built a small bonfire and we relaxed, eventually crawling into our sleeping bags to sleep under the stars alongside the New Fork River. Click on photos for enlargements.

The sheep herd, along with their guardian burros and dogs, met us when we entered the pasture, but didn’t join us at our campsite. We had two herding dogs and Rena the Akbash guardian with us, so we were sure to be alerted to any critters roaming about during the night.

Not long after we settled in around the campfire, Hud the herding dog let us know there was a bull moose just down the river from us. You can just make out the moose crossing the river in the photo below (those are our sleeping bags and pillows in the right side of the photo also).

Darkness crept in and the moose came up the river just opposite from our camp. It’s rut (breeding season) so this bull was walking along emitting soft grunts and calls. We could see the moonlight reflecting off his paddles even in the darkness. He eventually walked upriver from our camp and crossed back onto our side, but was met by the guardian dogs when he tried to walk back toward our camp. We could hear the bull as he thrashed around, rubbing his paddles against the willows and brush, and crossing back across the river again.

We let the fire burn down and went to our sleeping bags to watch the light show. There were millions of stars filling the night sky, and we saw several stars slowly falling, while others seemed to shoot across the sky. I closed my eyes and started to drift off to sleep when the screech owl arrived in the trees nearby. They are definitely named appropriately. Fortunately the owl only screeched about four times before moving away from us.

Things were fairly quiet for a while, but another moose tried to approach our camp from downriver a few hours later. Rena put the moose in the river, giving us peace once again as the bigger animal retreated.

We had a series of visitors during the night, including our guardian dogs that were in charge of the sheep herd. They never came together to our camp, but stopped in on individual patrols during the night. Luv’s Girl was thrilled to see us, and tried to bulldoze her way into our sleeping bags, but Rant seemed irritated that we were there. He ran around outside the perimeter of our camp, huffing into the darkness and marking all the brush. Apparently we were just another burden of his, more critters to be guarded. We heard the soft hoots from owls off and on during the night, and the occasional howl of a coyote, always met with a ruckus of sound from our guardians from various points throughout the pasture.

The sheep and burros arrived at our camp at sunrise Sunday morning, nibbling on the frost-covered vegetation. 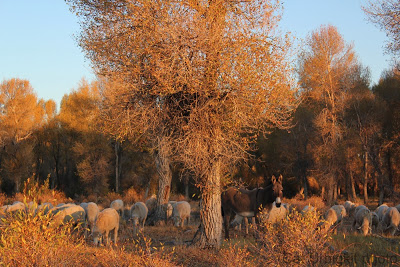 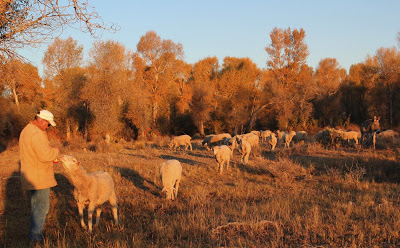 Jim started us a pot of coffee, and a few ewes came forward to share a bag of pumpkin seeds.

We drank our coffee while enjoying the view, soon realizing that any effort at getting acquainted with a trout would have strong interference (see photo below). We threw our gear and dogs back in the truck and headed back to the house.