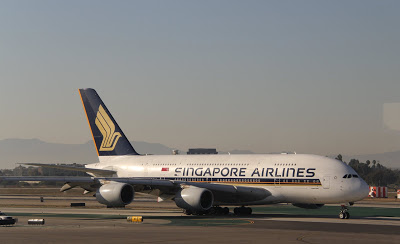 Brace yourselves for one of my aircraft geek posts. The Airbus A380 is the largest passenger aircraft in the world, capable of carrying up to 850 passengers. The big two-decker has been operational for about four years but as it services a limited number of US airports (LAX, San Francisco, JFK, Dulles, and Miami) most of which I never go through, I hadn’t had a chance to see one. I was at LAX on Saturday afternoon waiting for my connecting flight back to Denver when I saw this one push back. 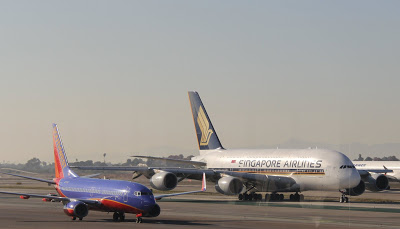 I added this picture with a relatively small Boeing 737 for scale. I’ve spent a lot of time around Boeing 747s and seen several Antonov An-124s, but was very impressed with this airplane. It caused a stir in the waiting area where I was sitting, with people taking pictures with their camera phones and pilots from other airlines talking about it. The A380 even had a car with flashing roof lights accompanying it, like a wide load escort on a highway. 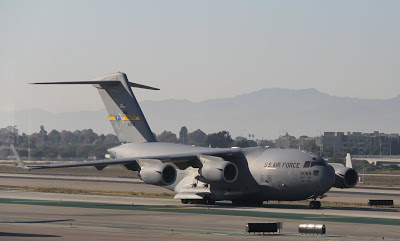 While I was watching this extravaganza, a strange thing happened. The A380 and an Air France Boeing 777 (somewhat closer to me) had both pushed back, turned and begun taxiing to the east end of the runway for take-offs headed west out over the ocean. Suddenly all the aircraft froze, and a USAF C-17 came taxiing east from the far end of the airport, going about three times as fast as anybody else had been. He took about ten minutes as he swerved around the planes in his way, cut between the A380 and the 777, went to the front of the line at the end of the runway and took off.

What was a military transport like this doing at a civilian airport like LAX? It’s not really a joint use airport like some that we have. Who or what was on board that he was given priority over everybody else?