Peculiar sends a link to the latest– there always seems to be news– on Emperor Frederic the Second (1194- 1250), of Sicily and the Holy Roman Empire (which wits will still tell you was none of the three)…

I have been trying unsuccessfully for years to sell a book on Frederic and his surviving relics like the amazing Castel del Monte (good book here). It might begin thus:

“Born a German Emperor in Sicily, to a mother nearly 50 years old; raised a street kid in Palermo, reclaimed his heritage at 16; feuded with popes, was excommunicated (often); made a reluctant crusade that ended in a mosque, shaking hands with Saladin and discussing falconry; died at 57 of malaria; left only an Italian Moslem town that survived him for less than a century, a son who was soon to die defending his cause and bloodline, a strange castle in Puglia , and a book of advanced science and art in the form of a hunting manual , The Art of Hunting with Birds.

“He was reputed in his lifetime to be the Antichrist, and was known as Stupor Mundi, the Wonder of the World. Dante, of the opposing political party, wrote him into Hell.

“The Nazis liked him for maintaining power as a northerner among Mediterraneans, despite his keeping a court of Jews, Moslems, and heretical troubadors, maintaining a beacon of rational tolerance in a time with little enough of that. Also despite the fact that his leading historian was the Jewish Ernst Kantorowicz, who they exiled (he ended up teaching at Berkeley).

“He defeated a Moslem guerilla army in Sicily , then made them into a kind of mercenary guard, settling them in the walled city of Lucera on the mainland and building them a mosque. He tempted St. Francis of Assisi with naked dancing girls. He was reputed to have experimented on humans, raising children without speaking to see what tongue they spoke, weighing bodies before and after death to attempt to discover the weight of the soul. As in his falconry manual, he was, perhaps to an excessive degree, the first anti – Aristotelian empiricist.

“When the opened his tomb not long ago they found he was sharing his tomb with an unknown young woman. Today he is remembered mostly by falconers, Sicilian patriots, and perhaps the Mafia, which some legends say started as a local patriotic society, fighting occupying forces and landlords in his memory.”

In a beautiful spot on his family ranch in central Montana. With sighthounds!

From Peculiar who writes:

“I’ve often thought that aspects of the Harry Potter epic would have been improved by this approach….”

Also check his blog link to an artist who has drawn The Call of Chthulhu in the style of Dr Suess, including rhyming text– brilliant! As he says, “We have an infant who will soon need it!”

Dan Gauss writes to tell us his Galgo girl has just given birth to a pup with Lashyn AND Plummer lurcher on the paternal side.

“Department of corrections: re: grandogs. It’s just the opposite. Galgo *boy* sired litter of uno. Plummer and Lashyn are on the *maternal* side. A singleton, born on my mother’s birthday could only be named: H1LDA 😉 I was trying to rustle up some pics of the parents and got sidetracked.” 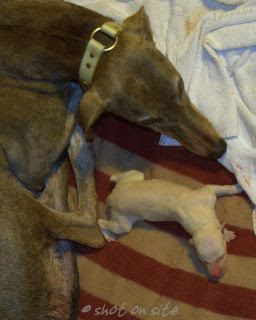 Grandparents in their youth:

Lauren’s Aquiling is up and running again and, at least until her book on her year among the Kazakhs is out, the best place for exotic falconry and adventure tales…

There is some pretty funny and often grotesque animal photography up at Nature Wants to Eat You. HT Annie Davidson, who also sent this video of a walking octopus.

Tim Gallagher, who recently completed a book on his harrowing expedition to the heart of the Narcotraficante strongholds of the Sierra Madre in search of the (almost?) extinct Imperial woodpecker, wrote the short version here, and added a link to the only videos of this largest of all woodpeckers…

Dr Joseph Rock explored the remotest parts of central Asia and southwestern China for the National Geographic in the twenties and thirties. Teddy Roosevelt’s big- game hunting sons thought Minya Konka in “his” territory near the border of Szechuan and Tibet– he wrote about in in 1930– was higher than Everest. A couple more Americans laid siege to it in 1935 (they were also hunters, armed with a Springfield .30- 06 and two “heavy” SMLE’s) and found it was formidable but not quite that high. Yvon Chouinard, Al Read, Kim Schmitz, Rick Ridgeway, and Harry Frishman (Peculiar’s biological dad) made another attempt on it in 1980, not long before Harry was killed in a climb in his “backyard” Tetons, but they ran into disaster. Bruce Chatwin allegedly caught the legendary “bat fungus” that did in his AIDS- compromised body in a cave in the vicinity, which is also home to the Naxi people and their still- living goshawk falconry. (Chatwin also put Rock’s book, and Emperor Frederic II’s falconry text de Arte Venandi cum Avibus, into his posthumous story “The Estate of Maximilian Tod”).

Obviously there is a book there, and eventually I hope to go, with Lib and Peculiar. Meanwhile I suspect the greatest single source of useful material is at the Arnold Arboretum near Boston, where Rock’s archives reside, full of treasures like this photo:

Leonardo Trujillo, a new falconer and friend of my apprentice Gary Moody, just trapped his first redtail “Rojo”. He may find that such “getting ready games” (term from Bil Gilbert) are almost as addictive as falconry itself. Meanwhile, congratulations!

Eli’s Baptism in Santa Fe two weekends ago. With this and a Tom Russell concert and deadlines and trying to get Momo going and editing– BUSY!
Eli and doting grandma:

Niki and Eli, Jack too…

The ceremony, us behind:

Lib with Jenny French, one of my oldest friends in duration if not age, beaming on what she calls the “Beebums”:

Our daughter, her husband and our granddaughter were here to visit during the Thanksgiving holiday. I took this picture during one of our field trips while they were here. Bella seems to have decided she likes goats, at least these three sweet Dwarf Nubian does owned by one of our friends. She had a good time feeding them peanuts.

Hope you had a nice Thanksgiving.

The broken pillar of the wing jags from the clotted shoulder,
The wing trails like a banner in defeat,
No more to use the sky forever but live with famine
And pain a few days: cat nor coyote
Will shorten the week of waiting for death, there is game without talons.
He stands under the oak-bush and waits
The lame feet of salvation; at night he remembers freedom
And flies in a dream, the dawns ruin it.
He is strong and pain is worse to the strong, incapacity is worse.
The curs of the day come and torment him
At distance, no one but death the redeemer will humble that head,
The intrepid readiness, the terrible eyes.
The wild God of the world is sometimes merciful to those
That ask mercy, not often to the arrogant.
You do not know him, you communal people, or you have forgotten him;
Intemperate and savage, the hawk remembers him;
Beautiful and wild, the hawks, and men that are dying, remember him.

I’d sooner, except the penalties, kill a man than a hawk; but the great redtail
Had nothing left but unable misery
From the bone too shattered for mending, the wing that trailed under his talons when he moved.
We had fed him six weeks, I gave him freedom,
He wandered over the foreland hill and returned in the evening, asking for death,
Not like a beggar, still eyed with the old
Implacable arrogance. I gave him the lead gift in the twilight.What fell was relaxed,
Owl-downy, soft feminine feathers; but what
Soared: the fierce rush: the night-herons by the flooded river cried fear at its rising
Before it was quite unsheathed from reality.