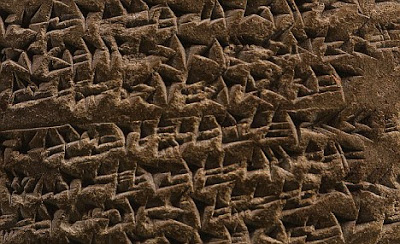 I just saw this article that gives some jokes and riddles found written in Akkadian on 3,500 year-old cunieform tablets. I felt obligated to post this, but they’re awfully lame. Makes you wonder what stand-up comedy was like in ancient Mesopotamia.

You know you live in a rural state when your largest newspaper has an investigative piece on a goat-doping scandal at the state fair.

This LA Times article on a heroin-filled burrito used in a police sting operation led me to speculate: what would Taco Bell call this dish if it was on their menu?

Heard this piece on NPR this morning on Mexican sotol distillers who are trying to sell their products in the US liquor market. Can designer moonshine be far behind?

Also heard about this one on the way to work this morning – scientists at the University of Colorado believe that the Little Ice Age was triggered by a series of large volcanic eruptions. I’ll reserve judgement until I can read more about this.

Please read about the vitally important research conducted by The Beer Archaeologist. I circulated this to some colleagues in the profession and got replies like: “I want that job!” and “Experimental archaeology my arse! McGovern’s always reminded me of a friend who figured out how to go fishing and get an MA out of it.” Well, all I can say is beer studies weren’t part of the official curriculum when I went to graduate school.