As Steve posted a few days ago, Connie and I did make a quick trip to New Mexico to look at Aussie pups. After our lab mix Maggie died in January, our Aussie Sadie has been pretty sad and lonely. We’ve planned all along to get another dog, and an Aussie was our preference. Connie started doing a lot of on-line research, and found a breeder in New Mexico we were impressed with,Desert Willow/Boyd Ranch Aussies. They had three litters out at Boyd Ranch, all from working Aussies, and we went down to take a look.

Boyd Ranch is located in the foothills of the Manzano Mountains, southeast of Mountainair. It is in a beautiful setting and we had lots of fun just driving in. We want to thank Curt and Susan Boyd and Theresa Gorduyn for their hospitality.

Our initial thought was to get another female, but by the time we made the trip we had decided on a male. We found two brothers from one of the litters that we really liked. We worked very hard to decide which one we wanted, and ended up not making a decision and taking them both.

One is a black tri-color.

The other is a blue merle.

Both appear to be handsome, intelligent, and affectionate boys.

As I mentioned earlier, these dogs are bred for work, not primarily for show, and the parents of this litter both work cattle as their day jobs. Here is a picture of the father, Tucker, who we didn’t get to see as he was elsewhere engaged in breeding duties. He’s a black tri, as you can see.

Here’s the mother, Skidboot, who is a blue merle.

Here’s a picture of Skidboot at work. I’ll quote from Skidboot’s profile that the Boyds have put on their website:

“Our dogs typically do not work cattle without us, but one morning I caught Skidboot (and her BFF Chappy) independently moving heifers in a pasture by the house under a nearby tree. It was very hot out and Chappy was bringing them in (a few at a time) to Skidboot who then held them under the tree. We are sure Skidboot was the one giving the orders because she was in the shade while Chappy had to work in the sun!”

Sounds like my kind of dog! The boys are still with Skidboot and we’ll be back down to pick them up in another three weeks.

I don’t go on the north end of town much, so I missed seeing this until the Denver Post pointed it out this morning. An unknown graffiti artist calling himself/herself “Karma” used abandoned concrete culvert segments located just off of I-25 in Westminster, as a canvas to paint an Indian bison hunter and his quarry. Apparently it’s been there about a year.

Not a typical tagger theme. Is this a political statement?

Ace flytyer Paul Dinolo of Duxbury, Massachusetts, just sent me an ingeniously boxed selection of small stream flies and terrestrials for this coming summer. More thought went into them even than is apparent; they are all big enough for clumsy fingers but small enough for tiny fish!

The new frames are finally done — here’s the latest rotation in the library. Click once right and again for biggest…

I don’t want to overwhelm everybody with gun posts, but this is a good one. Prompted by my dream gun post below, John Hill, “Johnny UK” of our comment section, has sent photos of his “one good gun”, a product of a lifetime of experimenting and trading. It is a Damon Petrick from Herve Bruchet in France, who also makes Darnes. I’ll let him speak:

“I really liked your selection on the Blog, and was going to post a reply, saying that I had now settled on just the one 20G Darne Damon Petrick, with 29 1/2 in Teague Choked barrels.

“It is as slim as a Boss frame, handles like a dream, and will be handed down to son No 1 as a heritage weapon when I depart!! – having enjoyed already 10 years of wonderful ownership – note the MOF signature on the woodcock, underneath, French version of “Italian photographic Engraving “, and, unlike many Belgian scenes, these dogs are real dogs! ,and the birds are flying… also note the wood – oh la la !!”

Apparently Bruchet is soon to come out with a true sidelock.

I hate to see the pressure that California Game & Fish Commission President Daniel W. Richards is under for participating in a hunt he had every right to undertake. Although hunting mountain lions is illegal in California, Richards traveled to Idaho for a successful lion hunt. Richards is not only a hunter, but reportedly is a life member of the National Rifle Association – two things that gall animal rights activists (led by the Humane Society of the United States) who are now seeking his removal. A report in California media quoted a California assemblyman who may seek a legislative resolution that would remove Richards from the commission. It’s my hope that Richards will prevail, because state wildlife commissions need to be filled with people like Richards, and by that I mean hunters and those who view hunting as a wildlife management tool.

Disregarding how it enrages me that agenda-driven activists are seeking to penalize an American for something he has every right to do – in Richards’ s case, traveling to the Northern Rockies to participate in a legal activity, and supporting local economies in doing so – my main concern is the need to retain hunting options for managing wildlife. Mountain lions are not endangered – they are a common, widespread large predator. They must be managed, and Richards gets that.

Why should I, a Wyoming rancher, be concerned about the California game commission? I don’t know Daniel Richards, but I am firmly in his corner. I am terrified about the spread of anti-hunting agenda and how that endangers human life when predators are involved, and keeping people like Richards in positions with decision-making authority for wildlife management is critical to stopping this nonsense.

Changing social attitudes towards predators appear to be one of the factors leading to the increase in predator attacks on humans. Wildlife conservation and preservation campaigns emphasize the need to conserve or save species, but provide little support for actual management and control of predator populations. Increased tolerance for wild animals near humans can cause a chain reaction of a wild animal losing its fear of humans, eventually leading to attacks on their human neighbors.

Animal advocates often promote legislation or ballot initiatives that result in bans or severe restrictions on predator hunting – that’s what’s happened with California’s Proposition 117, which banned lion hunts in California. Regardless of where ballot-box wildlife management is initiated, the result is often the same: a predator population that has lost its fear of humans, and eventually becomes a threat to humans. The areas where most of the fatal predator attacks on humans occur are within or near areas where hunting of predators is not allowed.

Voters in some states have banned the sport of hunting mountain lions with hounds in attempt to protect the big predators. But such efforts can come with unintended consequences, such as that experienced in Washington after the hound-hunting ban was passed in 1996. State officials found that instead of the selected lion harvest practiced by hunters who used hounds to tree their lions, hunter harvest was much more indiscriminate. Hound-hunters tended to take trophy-sized adult male lions, but hunters harvesting lions on their big-game package tags tended to take any lion they were lucky enough to encounter, so the number of female, reproductive-aged cats increased in the harvest.

Walter Howard of the University of California, Davis, has advocated that mountain lions must be hunted to be managed properly: “Mountain lions are normally quite shy, wary, solitary animals not commonly seen by hikers, hunters, or other people in the mountains. The absolute number of lions present is not very important, for when lions suddenly become very visible … and livestock, dogs, and other domesticated animals are attacked, the lion population has become too abundant.” Howard suggests that in order to show true compassion for lions, wildlife agencies should use licensed hunters as predators to maintain healthy populations of lions in suitable habitat.

Delwin Benson of Colorado State University notes that the historic pursuit and persecution of mountain lions by humans and dogs has helped to reinforce the cat’s secretive and elusive behavior, thus encouraging their desire to keep their distance from humans. Mountain lions that encounter humans with no negative consequences learn to tolerate people, and the lion’s desire to retreat is dulled. Benson suggests mountain lions should be subject to “aversive behavioral conditioning” such as being pursued with hounds to the extent the lion flees, in order to reinforce the lesson that humans are threats and should be avoided. Lions would thereby learn that humans are not intruders, and neither are they prey species.

That’s the kind of lion management I support. And I encourage hunters to come to Wyoming and other states that allow for such lion harvest (and bear harvest, and wolf harvest, etc).

And to Daniel Richards: Hang in there, sir. Some of us really appreciate your efforts.

Added note: The photo I used with this post is of a captive lion. He’s appeared in numerous nature shows. The snowy tundra he’s often filmed in is an Idaho potato field. 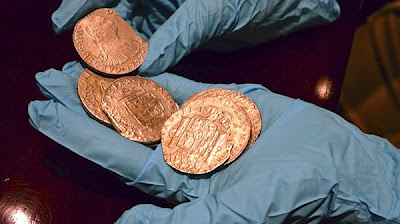 Spain has won a court challenge to claim sunken treasure from the wreck of Nuestra Señora de las Mercedes, sunk off the Portugese coast during the Napoleonic Wars. I found it interesting that the Peruvian government tried to make a last-minute claim to the treasure based on the fact the precious metal was mined in Peru.

The Wisconsin legislature considers allowing the hunting of sandhill cranes.

The cool kids in Denver participate in the Rock n Roll Spelling Bee on Monday nights. Try the bacon popcorn. I must confess, until I saw this picture I didn’t know they still made Hamm’s Beer.

Genetic researchers believe some of the earliest populations in the New World may have had their origins in the Altai Mountains of Siberia.

“Comparing information and knowledge is like asking whether the fatness of a pig is more or less green than the designated batter rule.” (David Guaspari)

Does that sound surreal? It is, but it’s a good analogy. If you doubt it, substitute:”…is like comparing the thickness of a wall to the degree of purple of the Second Amendment.”

Retrieverman is raising a new pup, with a mirror for “company” when alone.

I use an analogous technique with baby falcons. But with Post Office bears:

I also feed them from a timed automatic cat feeder to eliminate begging, and keep them in that kid’s swimming pool in the living/ computer room 24- 7, with dogs, to socialize them. It works…

One of the odd American cultural blinkers is that shotguns above ten bore are poacher’s tools, or else pre- modern (Buckingham’s remarkably obtuse and inexplicably influential “Are we shooting 8 gauge guns?”)

HE wasn’t, but the Brits made them til WW2, and still shoot them– and will pay good prices. Three examples from a 1996 Bonham’s auction catalog; page weights a Portuguese percussion pocket pistol Betsy brought back on a Pan Am Clipper in the 60’s, a boot knife courtesy of a loyal reader, a modern obsidian skinner by Callahan…