Adventuring on; she will be going out to Kazakhstan to learn serious Kazakh soon, then to several other Stans. The Explorers Club has provided some funds but I may just have to run a bleg here…

” On June 6th I am flying to Kazakhstan to spend two months intensively learning Kazakh. Amazingly, incredibly, this was fully funded! Then in September, I will run away again to that region to fly eagles, run dogs, and really learn how to manage horses and camels (for the sake of *ahem* cultural anthropology). I’m rearing to go – its one of those places that, once you been, all you can think of is how to get back (as you know), but I’m also fairly anxious and the harsh realities of it weigh on me. It will be very cold (I have some permanent damage from my frostbite) hard, and lonely. Also, finances will be difficult. The Explorer’s Club gave me $2800 (!!) but no other money has come through as of yet. .. [re new pix] Some photos from the last little while. Man, there is so much to tell you. I included the lamb’s eye one – as eating such things was old hat for me, but it was quite the “party trick” for all the visitors!”

Lauren with her eagle in Mongolia a couple of years ago: 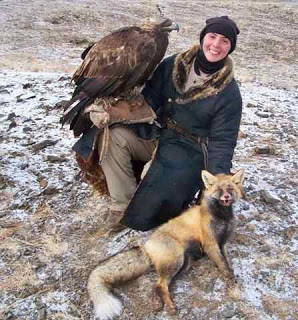 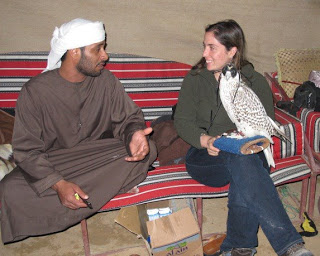 With our late friend and guide Aralbai: 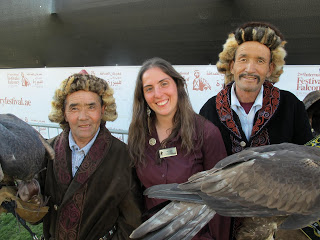