“Rigby .275”, Jonathan Hanson of Constant Apprentice , with a message. 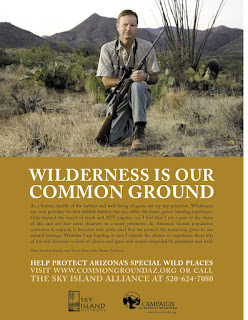 Still busy with work & scholarship and fun, not that these are necessarily incompatible or exclusive. A few hints– click to embiggen as always (the details are illuminating).

I went into my library to find an accidental still life of several emerging subjects: 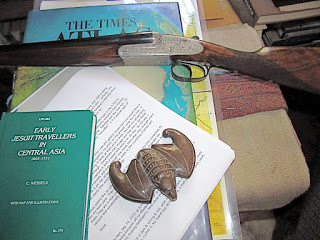 And here are some artifacts pointing to the fascinating intersection of Fabre, entomology, traditional Provencal culture and po- mo Japanese popular art… 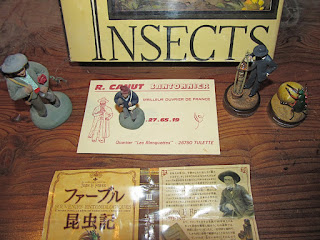 The orbit of my falconry is a long ellipse, mostly hidden from sight or thought from March to August, except for the minor husbandry of a molting hawk.

I feed Ernie in the afternoon and bring him inside at night to escape the mosquitoes and the raccoons. He bathes and preens and naps all day, unhurried and apparently as unconcerned about the approach of hunting season as I am.

Some Sunday mornings I drink coffee and read on the back porch where I can watch him work his feathers out, or raise one foot and then the other, or pull a wing down in a long, slow stretch.  Rouse. Yawn.  Wag his tail.  Preen again.

Otherwise, my days are hard to distinguish from those of my neighbors: Up early to the office, home late for supper, then sleep and dreaming not of hunting.

But the season comes, and I wake up with it.  Ernie responds.  The dog knows.  My family eats without me four days a week starting in September with the opening of rail season and through the end of February when rabbit closes.  In between, there is a lively, daily negotiation for free hours and trading trips to kids’ events and avoiding suddenly inconvenient work concerns.

If you are a hunter in your forties with a family of pre-teens and a hard-working spouse, you know the drill.  It’s all good.  It’s better than it would have been. You know that.

Our rails are like quail with all the air sucked out of them.  They seem to me like tiny herons who always wanted to be game birds but never made the cut.  Still, they keep up appearances as best they can.  If you squint, you can see the snipe in them.

Local humor has it that rails arrive on the backs of migrating geese, and it’s true they are unlikely trans-continental travellers.  In the Fall you sometimes find their carcasses on cattle fences, stopped mid-flight at waist level by a strand of barbed wire.  One of my friends calls them “butt-draggers” for their typical posture in flight.  Also true.

But I love them.  I love to hunt them, catch them, eat them.  I love the fact that such a strange little bird has a place in the published tables of our migratory bird seasons.  Considering the rarity of finding another rail hunter, I am amazed by that.

The Louisiana bag limit is huge, 30 in the aggregate for the two larger species, Kings and Clappers, and 25 total for Soras and Virginias.  I guess that means I could haul 55 birds from the field each day, or something like 20 pounds of rail.

I wouldn’t do that, even if I could.  I don’t think anyone has done that since maybe the turn of the (last) century, when rails and marshlands were both much easier to come by.  But then I hunt with a bird of prey, and the daily bag for falconers is three, a trade-off for our extended season. If I could vote on it, I’d nudge that to something closer to 10, which would be a good day with two hawks and truly banner hunt with one.

The early weeks of our rail season are inhospitable to hunters and to human beings generally.  The air is wet and thick, still 90 degrees at 6 PM, and the mosquitoes…  The mosquitoes.  Alas.

Misery loves company, so I bring the dog, who ignores misery as far as I can tell.  She loves to race around in the tall Johnson grass, sky-hopping after the hawk and pouncing into likely cover.  I offer water regularly, mindful of the heat, but she refuses until we’re back at the truck.  No time for water, Dad.  Hunt!

The hawk thinks likewise, though they both pant.  All of us pant.  All of us swat mosquitoes and hunch our heads into our shoulders when we have to stop moving.  As much as possible, we keep moving.  We hike through the heat and high grass, trying to stay a step ahead of the swarm.  Did I mention the misery?  I’m allergic to something in the rank weeds and every night until the end of October come home in red welts across my neck and arms.  My pants and shirt are drenched in sweat.  The dog is sticky and flecked with seeds and mud.  The hawk is annoyed to be back at the truck, even with half a crop of food in him. 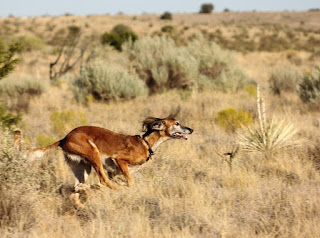 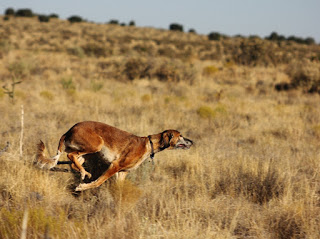 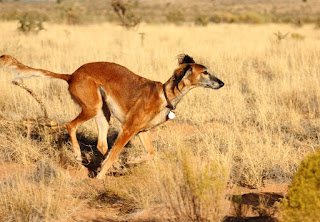 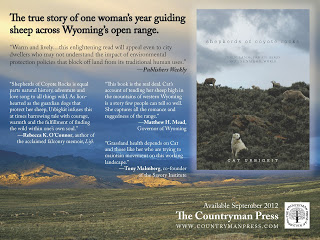 I love this poster that The Countryman Press created to promote my new book, so I’m posting it here to show it off. In the original image that serves as the background, there is actually a slash of rainbow-colored light escaping from the cloud cover over my sheep herd as they graze along the Wind River Front. It was a beautiful, stormy spring day, and the image takes me back there every time I look at it. The combination of the fresh rain smell and damp sagebrush is heavenly.

Countryman Press’s publicity guru and all-around nice guy Tom Haushalter asked me a series of questions about writing the book and what it was like to live on the range with my herd, and posted my responses over on the company’s blog. Have a look here.

It’s officially fall, and we’ve had our first snowstorms in the Winds, helping to put a damper on the wildfires still burning in forests on both sides of this valley.

Our herd, and its guardians (both burros and dogs) continue to graze on private property along the Wind River Mountains – about three miles from where the photo above was taken. Although we had acquired a new guardian pup a few months ago (Khan), we had to give him up last weekend, as we met someone who needed him more than we did. He’s currently getting acclimated to his new job guarding a goat herd in central Wyoming. It’s tough to let pups go, but it’s easier when I know they are headed out to do the job they are meant to do.

The domestic sheep herds (including the one below) are headed off the national forests and back onto the lowlands to start their journey south to the desert for winter grazing. The dark spots near the herder on horseback are herding dogs, but the other black spots are black sheep (marker sheep that enable the ease of counting, as in 1 marker per 100 ewes), and the brighter white animals are guardian dogs. Click on the image to see a larger version. 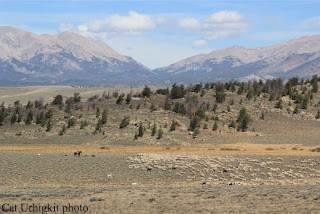 I think of myself as a sort of an amused amateur taxonomist of class, as I am of biology. You don’t have to be a snob to be interested in class; despite Americans’ common nervousness about the subject, it exists, like evolution, whether you deny it or not. Someone who stands a little outside the lines, as Geoffrey Household observed in his suspense novel Watcher in the Shadows back in (I think– the computer is not in the library) 1961 may be able to get the most fun out of it…

Instance: while digging through my Bakewell material in anticipation of the imminent visit of his biographer, I came upon the following portrait of the old adventure priest by the studio (“House”) of Bachrach, THE photographer of the old families of America and other worthies. Given its age it may well be by Fabian himself. 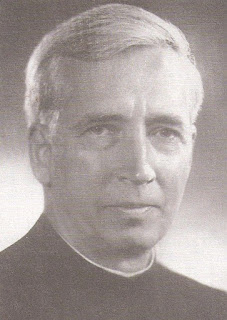 No shock– the Bakewells were “rahther grahnd” in the words of Betsy’s old friend Joanie van Ness. His great aunt several times removed was Lucy, Audubon’s wife. He first went shooting as a child in a mule drawn wagon, with servants, on an estate in Missouri where he was born, and kept the Social Register beside his Alpine Journals, breviary, and Colt Officer’s model.

What amuses me is that a second Bachrach hangs on my wall: a childhood photo of Betsy Huntington taken around 1940; that is, also back when the studio was not general knowledge (now it has a Wiki). 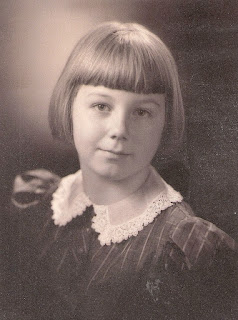 Betsy was a Huntington and a Trumbull, born in China, raised by ancient parents (or their surrogates– “Mother wrote a poem about me at four, then sent me away and I didn’t see her again til I was eight”– only a slight exaggeration).

One grandfather was a colonel in the Marines and kept fighting cocks and blood horses, but her father the bishop was rather left- wing and bohemian despite his office; Bets herself blew a shocking inheritance to smithereens in two years, and was kicked out of her “good” college for general rowdiness. She then put herself through BU Journalism school, and worked hard all her life, never having much in the way of financial security. The only snobberies she had were almost comical, against the smug; she called Boston Brahmins “that Puritan commercial money”, and once said that her ancestors were “Connecticut Valley farmers, soldiers, and Anglican divines, who all said ‘ain’t’ and told their dogs to ‘charge’ * until after the Second World War.”

I see her sitting on a fence rail with John Davila at the Datil Rodeo back in 84, critiquing equine confirmation, while John’s then- wife Becky nudges me and says: “Two horseback aristocrats, a redneck Spanish rodeo cowboy and a Lady from New England, half smashed and talking horses– and they don’t have a pot to piss in between them!”

I’m not sure she had much more in common with Andy Bakewell, but they both did have their Bachrachs, and old farms somewhere in their pasts. 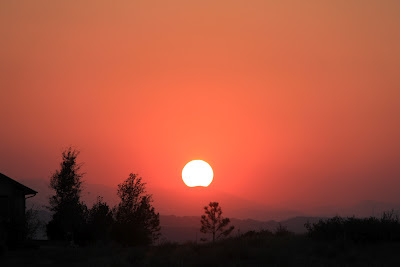 Luckily we haven’t had any more major wildfires for the last couple of months. Last week though, we had a lot of haze in the air from smoke that had blown in from fires in Idaho and Oregon. That made for some beautiful spooky sunsets like this one. 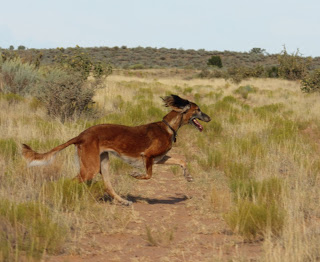 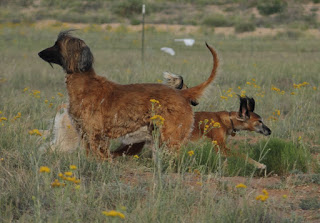 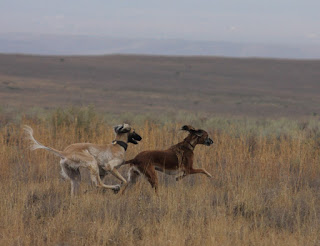 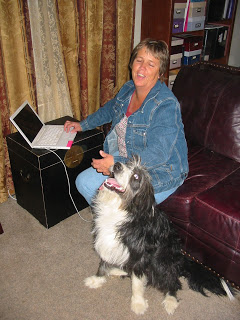 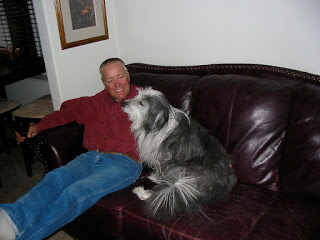