Early last July, Stacia Novy, a young military career woman, biologist, and falconer, e-mailed me an excited message that she had just been instrumental in finding the nest of a very little known Neotropical raptor, the Solitary Eagle (Buteogallus solitarius), in Belize. She attached this picture. 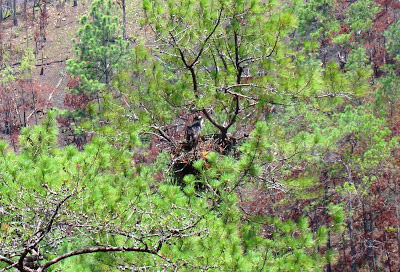 Unfortunately, since then, most published accounts have omitted her role, though if you do any Internet searching you will find, to quote, that she was the one who “… modified and applied traditional bird-tracking techniques… to follow the breeding/prey-carrying male eagle to the nest. This was a deciding factor, as the wild eagle was NOT radio-tagged and could not be followed any other way.” She was more experienced with raptors than many of her colleagues.

Somewhere between discovery and official reporting, a competing group apparently took over the publicity; appropriation of data is regrettably common, but allegedly some of those now claiming credit were not even in the country. A short account of the discovery is available here— scroll down– in three parts, with her role mentioned. And apparently the North American Falconers Association will publish something next season. But it would be nice to get some “official” scientific recognition for her too.

Stacia with Aplomado– no beginner in game hawking!

22 thoughts on “Credit Due”