As Election Day approaches, one could be forgiven for thinking our country has never seen a harder time than now, nor faced a bigger threat than the wrong man being elected on Tuesday.

This is a triumph of salesmanship.  It is the power of vast stacks of cash that political speech can build a different world on top of the one we know and make us believe in it.

But to the point that we may not, in fact, be the richest people in the richest country in the history of humankind, I say thank God for that. It is a blessing, not a curse, that we have failed so far to completely equate value with money or finally replace our native wealth with container ships of stacked boxes.

I’ll grant you that our native wealth may be easier to see in some parts of the country than others.  It may take a different set of tools and understandings to realize its worth.  But it is there, waiting for us to find it; waiting to be made into something good like spun hay into gold.

Tuesday morning I’ll be standing in line at the polling station with my aggrieved and downtrodden neighbors.  I’ll probably drive there, even though it’s less than a mile away.  I may bring coffee from home, but there’s a three-dollar cup at Starbucks if I don’t want to bother.  I’ll read a Kindle book on my iPhone as I wait.  And when I vote, I guess I’ll vote my conscience.

But Tuesday afternoon, I’ll be hunting rabbits in a nearby field.  Chances are good that by day’s end I will have slept, voted, worked, hunted and eaten three hot meals within a five mile circumference.  I will have enjoyed all the wealth of our Great Recession and some of the wealth that has not yet receded into history. 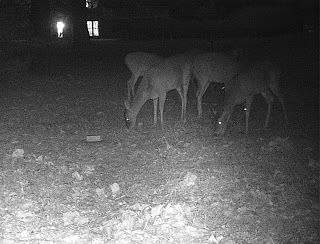 Part of the neighborhood deer herd, a healthy population that lives well on our landscaping.  My friend Tyler took a doe from this group last week by bow, shooting from a blind he set up near the swing set. He keeps several families in meat.  I put part of this one in a John Folse recipe for venison and vegetable soup. 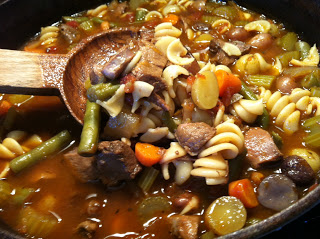 My friend Jeff from Chackbay wouldn’t starve if the power went out for a year.  Chances are he’d be shipping meals up to us from the bayou, none of them short of delicious. Here’s one of the daily rabbits his good redtail, “Alex,” puts in the bag and where they often go from there. 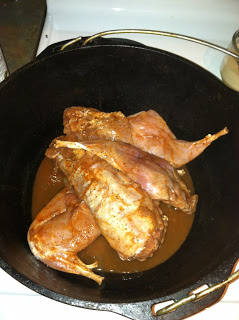 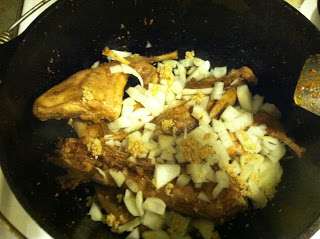 11 thoughts on “Enjoying a Fine Recession”