We had hoped to go to a larger museum that features the work of the weird regionalist Thomas Hart Benton, but it was closed both days that we were there. A small modern art museum and the most unique museum I ever seen, based on a single sunken ship were, however, open, as was Oklahoma Joe’s barbeque. One of our Q-philes had tipped me off to Oklahoma Joe’s, which is in a strip[ mall and might easily be passed by. it would be a mistake. Oklahoma Joe’s meat is sublime, cheap, and amazingly good; I would have to say it is the best barbeque I havae eaten and one that I would like to learn to make myself. I ended up with brisket and pulled pork (the pork was the best pulled pork I have ever eaten) and a good part of one of Jennifer’s ribs. I suspect that each Kansas city place has one outstanding specialty, and I would go back to Jack Stack for the burnt brisket ends, but overall you can’t beat Oklahoma Joe’s. Bourdain though so too; he put it on his celestial list of fifteen places you must eat before you die, which also includes the French Laundry and El Bulli.

The small museum The Kemper, had some interesting pieces, well displayed in a large space and with the unusual virtue of being a small enough collection so as not to induce museum fatigue. It had some pieces that did nothing for me, a boring Warhol (redundancy), an interesting exhibit of art that owed to cartography, some a bit didactic and some like scientific diagrams , mysterious without their texts; a fascinating blown glass structure like a enormous translucent sea creature, and the shop where I found wonderful earrings for Libby, after passing on ones that were made to resemble Sushi. I did get to see a good Benton, of an old cowboy that reminded me of our late rancher Fred Martin, which was hung beside what I think of as a very atypical David Hockney; it somewhat resembled his recent tilted landscapes (themselves in part a homage to some of the stranger mid-western painters). But this one was not a pastoral scene; it resembled jagged volcanic peaks at sunset. Neither fields nor swimming pools were evident. 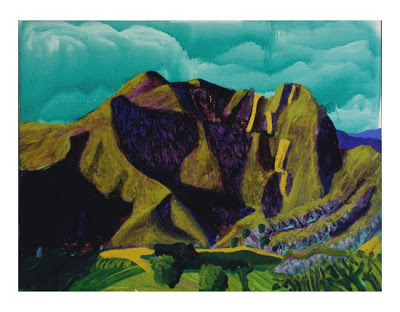 Outside stood a creepy, brilliant giant spider which when the rain lifted I insisted on posing beneath like another hapless character out of Lovecraft or Stross. 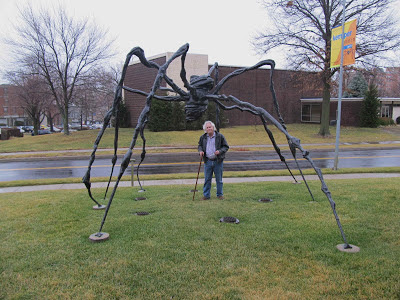 5 thoughts on “Buildings and Food”