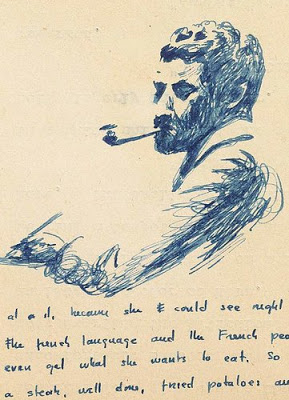 Less than a week after I posted Faulkner’s famous quote from Requiem for a Nun, the NY Times uses a play on it to announce the recent discovery of some “lost” Faulkneriana that is going to auction this summer. A box found in a barn on Faulkner’s daughter’s farm near Charlottesville, Virginia contained manuscripts, letters, and a hand-bound book length poem. 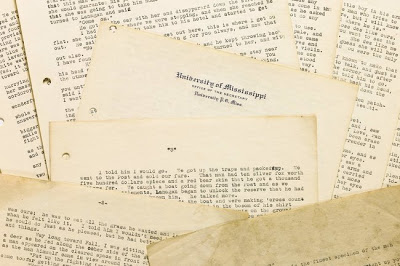 These items along with Faulkner’s Nobel Prize medal and a draft of his Nobel acceptance speech are all going to auction at Sotheby’s in June. Sotheby’s estimated sale value is $500,000 – $1,000,000.

Ataika, of course. Here, two rearrangements of our furniture to fit her whims. 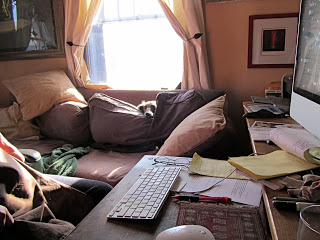 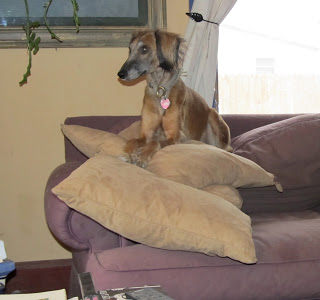 Our last winter predator is an adult male Coopers hawk in beautiful plumage, and despite my admiration for his kind I hope he moves on to nest– I don’t relish keeping my pigeons in for very long. He allowed me to get even closer, but this was the best I could do; the photo is not good, because I was standing in bright sunlight that turned the viewfinder into a mirror. Still, he is plainly visible atop the dog house, eating a blue bar homer cross as big as he is. I think it will enlarge. 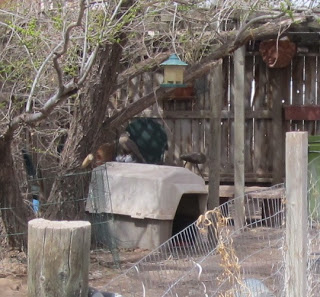 From Sean Sexton’s Blood Writing, attributed to “Anon.”, in a small seafood restaurant in the Yucatan:

(Love life and face it, because good or bad, we have only one) 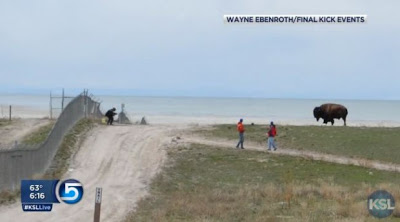 Bison are bigger and stronger than you are. Believe me, they really are. And it’s a really really good idea not to annoy them. 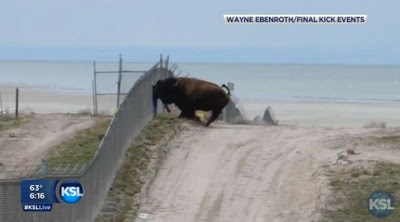 Unless your life’s ambition is to be a Darwin Award Winner. 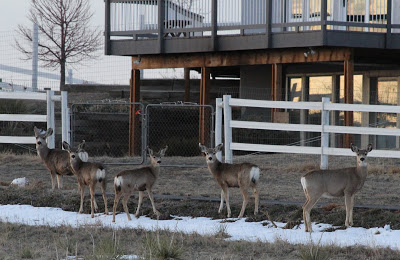 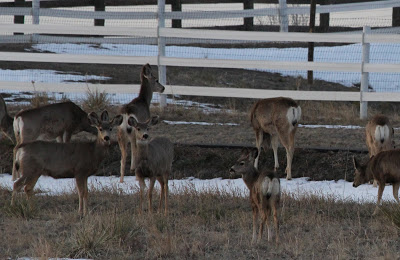 There comes a time in life when you realize that everything is a dream. Only those things that have been written down have any possibility of being real. That’s all that exists in the end: what’s been written down.

(I just could’t continue with the K’s)…

David Petersen is a bowhunter and a good writer; I think of him as an old shaman of the antler totem, and he has just received an award from the Back Country Hunters and Anglers. Here he is with a fine bull elk. 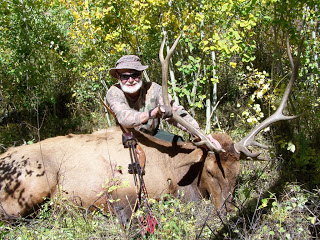 But he is not looking for praise; he is spearheading the effort to make Audubon Magazine  live up to its historic principles of bird conservation, and reinstate conservation writer Ted Williams,  fired for arguing for the euthanasia of feral cats, considered a major factor in the loss of breeding songbirds. My take is further down on the page, and I agree 100%. Dave?

“At the suggestion of Audubon, Mr. Williams, quite recently, wrote a short piece for the Orlando Sentinel
detailing the horrific annual slaughter of songbirds in North America
by cats, both well-fed and alley variety. A focus of Ted’s article was
on the inhumanity and ineffectiveness of the currently dominant method
of public feral cat control, which involves trapping, neutering, and
release back onto the streets to continue killing birds and other
wildlife. Rather than this failed and inhumane program, Ted pointed out,
it would be both more effective and more merciful to these millions of
starving homeless cats, to trap and euthanize them. Ted went on to point
out the ready availability of an inexpensive, effective and human
cat-specific drug that authorities could be using for cat euthanasia,
rather than a less effective concoction used in the past. From that, the
Kat Krazies eagerly and viciously misinterpreted that Williams’ was
advocating that you and I should go out and start poisoning kitties in
the park, which he had not said at all…”

Read the rest here, and join Dave’s campaign to rehire a quality journalist who brought a real problem into focus.

Two more points: cat haters may for all I know be present in this campaign “against” cats, but its impetus was from a group of scientists involved in bird conservation. I have owned nearer ten than five cats, and my not having any is more a function of living in a four room house with five dogs and a hawk, and priorities.

Second, while a cat lovers group has objected to the methods of the study that implicated cats as significant songbird predators, studies in Australia and England came to the same conclusion. Especially if you live in an area of ground nesting birds,  at least til we know better, keep those kitties in!

UPDATE  26 March: Matt Miller says Ted has been rehired. No oficial word but Matt has good connections and I asssume he is right!

The material below got me thinking about the late great Les Line, who edited Audubon mag from 1966 to 1991.

I reminisced to a younger friend:

“Les Line: only genuine mag editor genius I ever knew- never met Pat Ryan– light when he weighed 250 pounds, walrus mustache, long hair, turquoise on a bolo tie– this in his office at Audubon in Manhattan, where his office decorations were a Weatherby bullet board, a giant photo poster of a Dirty Harry- type model 629 .44 mag, and another big photo of him with a dead warthog and another version of that revolver. For YEARS. And he commissioned John Mitchell’s The Hunt and Bob Jones’ African piece but also pieces from every great book Peter Matthiessen wrote, also for years…

“He once brought me to his local pub and ordered me a burger that weighed I believe a third of a pound, smothered with sour cream and caviar, to be washed down  with some Bavarian ale. He might have eaten three. What a man. I brought him up to Wildbranch years after his firing, and damn if the kids weren’t puzzled by “nature writing” as a subject. Not MY students mind you, but the ones in the other two sections. “ 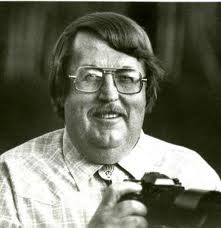 And then- Jungian synchronicity, anyone?–I looked up his NYT obit.

“Mr. Line’s visibility was undoubtedly highest when he was fired in March 1991. The society, which began in 1896 expressly to protect birds, naming itself after the naturalist John James Audubon, had decided that it wanted to be a bigger player among environmental  groups; consultants suggested that it could invigorate the magazine by de-emphasizing birds. The board replaced Mr. Line with Malcolm Abrams, a former managing editor of a supermarket tabloid, The Star…

“As editor of the newsletter of the Michigan Audubon Society, he helped persuade the State Legislature to end a 120-year-old bounty on wolves in Michigan. After Audubon printed his photograph of an endangered Kirtland’s warbler on its cover, the magazine hired him as assistant editor in 1965. He became editor the next year at the age of 31…. A large, exuberant man with a passion for toy trains, jazz and guns — he claimed to have a Tommy gun in his collection — Mr. Line relished controversy. As a young editor in Michigan, he would sometimes write an anti-cat editorial “

… think of us? Not much, apparently…

“Chris Matthews, host of MSNBC’s “Hardball,” asserted that gun rights advocates aren’t “normal people,” they have no “other interests,” and they are uninterested in their wives or kids…”

“After Columbine, a Boston Herald op-ed [yes, in Massachusetts!] described the average participant in a 1999 Boston Common pro-gun rally as a wannabe “hicksville cowboy, as in way out there, somewhere off the Mass Pike or at the far reaches of 93, from towns with something to prove and lots of Amvets posts…”

[… when speaking about sales without background checks, gun controllers always refer to “gun shows.” Most guns used in murders aren’t bought at gun shows — they’re stolen or bought on the street. But gun shows are large gatherings of the “gun tribe” — and so they must be shut down…]

“Gun control, it turns out, is largely culture control.”

For an antidote, read Dan Baum. Or this fascinating bit about the granddad of all civil liberties pro- gun thinkers, former civil rights activist Don Kates. I thought that he perished in the Cretaceous Extinction Event like Col. Cooper!