Henry Chappell just emailed to tell me that John Graves, Texas writer and living legend, just died at (I think) 93. John was a true Texan with deep roots, a civilized man, a WWII vet who had lived in Europe but eventually preferred his roots, a conservationist and localist before such things were chic,  and quite possibly one of the few great men I have ever known. We corresponded for over 20 years on just about everything.

He was one of the one hundred writers mentioned in my Book of books, and  the only one of those I ever blurbed, for a late edition of his wonderful The Last Running. My fellow blurbers were the most various company I ever shared a dust jacket with– McGuane, Gordon Lish (who was then fiction editor at Esquire), Verlyn Klinkenborg, William Kittredge–!

The tale is told by an old man, who as a boy witnessed an ancient rancher, who had driven cattle to Montana and fought the Comanche on the Texas plains, allow a few temporarily renegade Comanches to run and kill one of his buffalos. As they ride away, leaving the carcass behind, he turns to the boy and utters the best last line in American literature…*

When I got my copies I lent one to old Leonard Parker, a grandson of Quanah Parker and something of an old renegade himself (search the blog for his whole story). He was so touched by the tale that he asked if I could get him a signed copy. Below, John’s reply and a recent pic of Leonard and me in Magdalena, where he had been visiting from Oklahoma. (Right or double click to enlarge).

* “Damn you boy”, he said. “Damn you for not ever getting to know anything worth knowing. Damn me, too. We had a world, once.”

Get over to Jameson Parker’s to read the latest installment in his account, at times hilarious, always eloquent, sometimes horrifying account of his horse wreck and slow recovery. God, do I identify with him– I am not as hurt and hope I never will be, but my Parkinson’s can at times provide an analogy; and like him, I am a physical person (I only impersonate an intellectual) wondering how my poor body, once so obedient, got so damned OLD. The link will take you to the latest; put aside some time and, as bloggers say. Read The Whole Thing. And comment, and cheer him up or entertain him if you can.

A quote from the most recent installment:

“Doctors have to walk many fine lines: compassion and dispassion; warm
encouragement and cold truth; diplomacy and bleak reality; the possible
and the impossible; potential harm and potential benefit; others I know
not of. This uncharacteristic skirting around a direct answer to a
direct question rattled me, and for the first time it began to occur to
me that I might be in more trouble than I realized, that perhaps certain
parts of my previously always resilient and adaptable body might not be
able to bounce back or adjust as they always had before.”

Change of subject — free associating mind goes from one serious writer/ blogger to another– Michael Gruber, whose new novel will  be out within the month, reflects on the yawning cultural chasm in Western culture that opened just after my generation— I appear in the comments. I realize I have many young readers, like the Peculiars and Moro, who from education, parents, reading, have no culture gap; like Gruber I think they are “outlyers”.

One more thought: I have always said that I know more literate, historically- aware, art conscious scientists than I have known scientifically literate lit folks. Gruber was a biologist before he became first a ghost writer and then a uniquely original novelist. Though readers of this blog as well as its heroes tend to bridge all gaps and defy all stereotypes– Classicist writer- actor- cowboys, liberal Catholic convert biologist gun nut thriller novelists, “and more and worse”– itself a line from a woman who never fit a stereotype.

Shiri had to leave Larissa with us for a couple of days when she flew to San Diego for a friend’s play opening there. Rissa behaved like a lady– she has obviously gained some poise being the sole queen in a house of boy dogs rather than the third rank female. We hope to breed her with Tavi this fall– serious queries welcome. Here we are in Albuquerque with the prospective parents. Pups will be 3/4 Almaty, 1/4 Russian stock through Tav and Vladimir’s Timur, good hunters all– and Ataika’s grandchildren (we are keeping one). 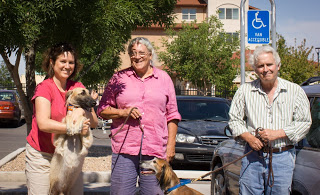 And you remember this one?

From Rob Sheffield in the current Men’s Journal:

“When you marry somebody, you are guaranteeing that you will have real problems, a future full of them, the kind that involve death and disease and grief… I know other husbands are afraid of this stuff. I have been afraid of it too, and when bad things really did happen they were even worse than I could have imagined. My nightmares came true, and I can’t tell any husband he should be less afraid. Our fears are totally justified.”

! This is a subject I have not seen written about, but when two widowed people decide to marry, as Libby and I did almost 20 years ago, you better believe it will be discussed.

Weekend before last, I volunteered some time excavating at a rockshelter called Blackfoot Cave in the southeast part of Douglas County. The Colorado Archaeological Society has been conducting excavations here for the past few years after Doughas County became convinced of its signficance and acquired the site. The main overhang is behind the trees on the right side of the picture. A farmhouse, built at the turn of the Twentieth century, stood where the cars are parked now. You can see a remnant out-building in front of the trees.

Here’s a picture of the excavation party taking a lunch break in front of the main overhang.  If you look closely you can see a masonry wall across the back of the shelter that was put there by the owners of the farmhouse. There’s an active spring behind the wall. The people who occupied the farmhouse moved lots of dirt around which has made the archaeologists’ job fairly difficult, as many of the prehistoric occupation layers have been disturbed and/or mixed with historic trash.

Here’s a pic of the unit I worked in. You can see it has good dark charcoal-flecked midden soil. One of the joys of digging in rockshelters is that you get ot deal with lots of rocks as you can see here.

I was fortunate enough to find this Late Prehistoric corner-notched arrow point at a depth of about 75cm. I found it underneath the rock with the bucket and tools on it you can see in the previous picture. It’s made out of a reddish colored petrified wood that is a common material found locally.

I am convinced we will find some earlier datable occupations here. One of the units directly in front of the shelter (right side of the second picture) was returning lots of good undisturbed material, including datable charcoal, at a depth of about 2m. We’ll see how those dates turn out.

The site has a wonderful view of Pike’s Peak, which you can see under these afternoon monsoon clouds.

Bonus nature pic #1: this goldfinch spent about 10 minutes chowing down on a thistle just south of our unit. Thistledown was flying everywhere.

Bonus nature pic #2: this young robin eyed me for a while, seemingly trying to decide if he should ask me for food.

A little over a year ago I posted that I had begun seeing indigo buntings at our feeders in addition to the lazuli buntings that had been coming to see us for years.

At the time I mentioned that I was seeing an individual that might be a hybrid and had seen this interbreeding referenced in field guides and elsewhere. I saw this fellow on the feeder earlier today and he certainly has more white on him than I have seen in other indigo buntings. The bird I remember from last year was completely white on the belly and flanks, but didn’t have any traces of white on the wings like this one does.

UPDATE: Added this picture taken from a different angle.

UPDATE II: Per Steve and Lane’s comments, here’s a picture of a blue grosbeak taken on the same feeder a couple of years ago.

Last summer we had to replace our hummingbird feeder as the old one finally bit the dust. The birds would have nothing to do with it and boycotted us.

Well they have finally decided to accept the new feeder. Beginning in mid June we had one or two hummingbirds at a time until this week when we now seem to have a dozen or so. I have seen broad-tailed, calliope, and rufous so far. This female is sort of giving me the gimlet eye as if to say, “Why are you pointing that black and white tube at me?”

The light wasn’t quite right to get the bright chin feathers on this male calliope to light up. I’ll have to keep working on that. If you look closely, it appears he has a small insect in his bill.

“Among the professional hazards of being a book critic is the nap. Naps
sneak up on you. They are beautiful but, like recreational drugs and
termites, they can undermine the foundations of your existence.
Comfortable armchairs are murderous traps.”