Fallacies do not cease to be fallacies because they become fashions. 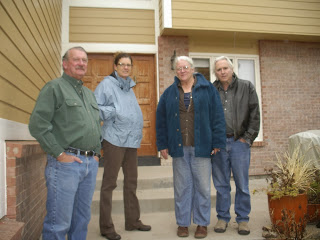 Steve and Libby (accompanied by Ataika and Mima) spent the night with us Sunday, stopping en route to some meetings in Laramie.

Arthur Wilderson came down from Ft. Collins to join us. He unlimbered his camera and these pictures are courtesy of him. We had an enjoyable dinner and stayed up too late doing too much talking, as usual. 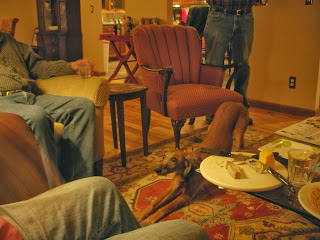 I had to put in this snap of Princess Ataika, imploring Arthur to part with something off the cheese plate.

Plan is for the Bodios to stop by again on their way south later in the week, when they have concluded business in Laramie.

It’s been nearly two months since Rena tangled with wolves while protecting our sheep herd in the foothills of the southern Wind River Mountains. She has recovered nicely – no major muscle loss, but some stiffness in her hind end remains, and we suspect that won’t change. The sheep herd has moved home for the winter, and Rena is happily back on guardian duty, but tires easily. We’re hopeful for a quiet winter.

The essay I posted here on Q about the weekend of the wolf attacks on our herd has been widely read, and I’m pleased to say that U.S. Fish and Wildlife Service Director Dan Ashe was one of those readers. Ashe quoted some of the essay at a carnivore conservation conference at Yale this week, and showed the crowd a photo of wounded Rena. His point in doing so was to urge those present “to think about the people who must share the landscape with these species. We need their support, their understanding and their forbearance if we want to see large carnivores roaming free.

“We must seek solutions that work for them, as well as for the species we manage. To do otherwise will perpetuate the conflict and make it harder for carnivores to gain acceptance.

“Compassion and empathy. That’s the key.” Amen to that, Mr. Ashe. Thanks for spreading the word.

Rena’s responsibilities have increased now that she’s healed up and her sheep are home. Her 9-year old mother, Luv’s Girl, gave birth to four pups in early October, so she’s on maternity leave. Luv’s Girl will race out to join Rena in reacting to a perceived threat, but she isn’t actively patrolling since she’s too busy tending to her pups. We’re night penning the sheep to give the dogs a break, but Rena stays double-busy checking the herd, and then checking her mother with the new puppies in their natal den. We’ll keep one of the pups to raise in our herd, and send the others out to other livestock producers who need working dogs. I think we can say with confidence that this lineage is wolf- and bear-tested. 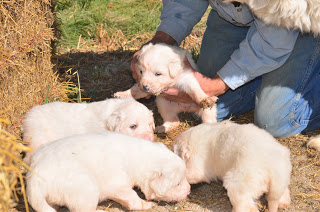 Today’s Denver Post reports that a young bull moose has been roaming a subdivision in Parker (maybe 10 miles northwest of us) for the last two weeks. CPW and law enforcement are keeping an eye on him   in hopes of keeping him out of trouble. Click through  the Post link for more pictures. I really wonder where he came from and why he decided to come way out here. We don’t have that many moose in the state, much less in the Front Range.

In fact, moose had been extinct in the state in the 20th century prior to the transplanting of a herd from Wyoming into North Park (Jackson County) in the late 1970s.  I was running a survey in North Park in 1978 and remember watching them helicopter-lift moose into an area near where we were working. 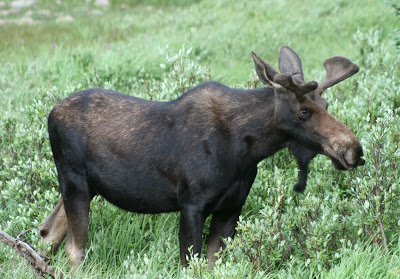 They have done well here. Here is a picture I took of one up on Cameron Pass two years ago.

UPDATE
This morning’s Denver Post (30 October 2013) reports that yesterday CPW had successfully tranquilized our visitor and were transporting him to western Douglas County, i.e. the Rampart Range foothills and Pike National Forest. The article said they had tranquilized him near the intersection of Lincoln Avenue and Jordan Road, which are large busy streets no moose should be around.

Courtesy of Reid,we learn that UC Boulder has banned costumes based on Indians, cowboys, “Mexicans” and– costumes?!– white trash.

Having spent time at the bar today after the week’s second funeral, I can only conclude that any image of me or my neighbors is now verboten. (Images NOT from today– we don’t take pics at funerals, but every one is a local friend). 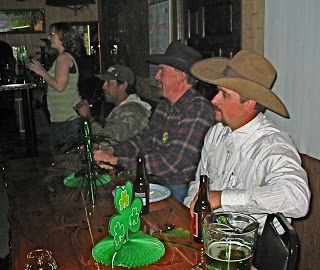 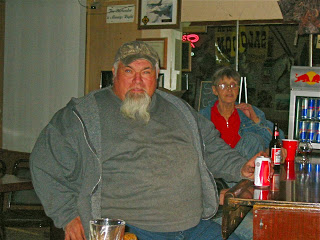 The ones above may not be what you think, (which individual above is ethnic Italian?)  but the last three may especially confuse the taste police: John Paul Jones Apachito (an Alamo Navajo) impersonating an Irishman on St Paddy’s; Tyler Chavez, half Italian miner and raised ranch Mormon, now getting back his patronym “Scartaccini”, and his wife Kayla;  Cody Henderson and Neal Harris– both half “Spanish” as we say here, but only Cody is considered “Hispanic”.

We as a society are more label- mad than white South Africans used to be, but not in “real integrated” Magdalena, thank God. 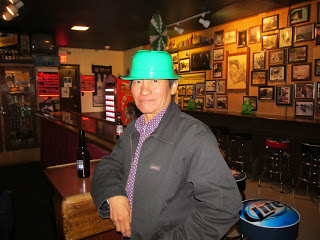 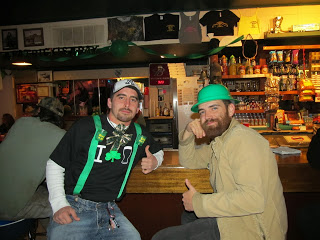 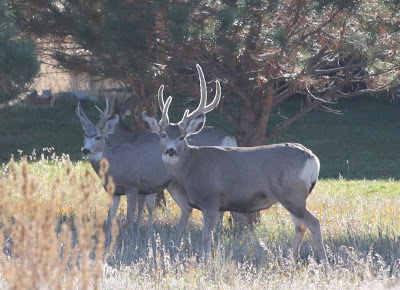 I mentioned in a post earlier this week that I had seen a buck with half his antlers broken off on one side. On closer examination it appears they weren’t broken, but grew that way. 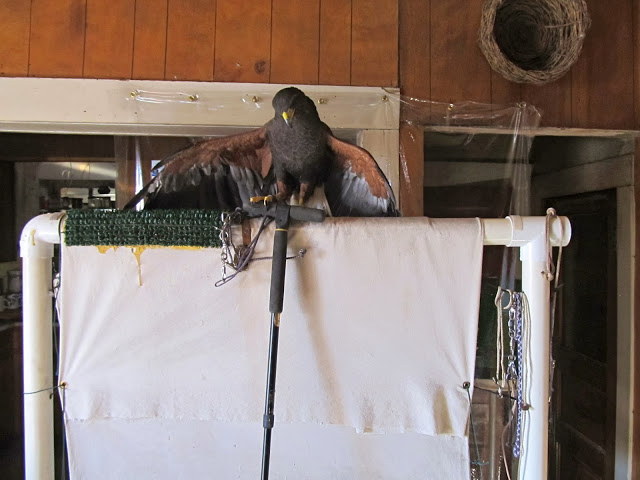 As I recall once more
The time I drifted out
On an off-shore wind
And believed I was in danger,

I recall again my fears,
Those small ones I thought so big,
For all the things I hadn’t yet
Accomplished in my life.

Yet there is only one big thing
That truly matters:  to live
To see the great day that dawns
And the light that fills the world.

A Traditional Kittinguharmiut Song (as adapted by Gerard Cox)