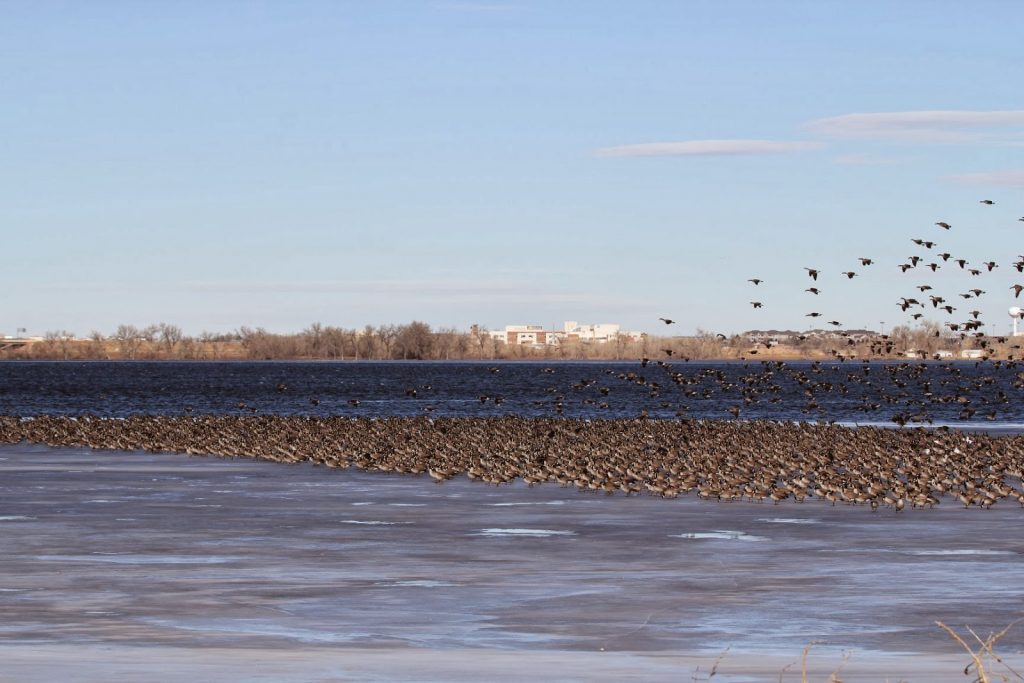 I ran up to Barr Lake yesterday to look around before last night’s storm got here. I was intrigued by these flocks, each of hundreds of Canada Geese, who after 15 or 20 minutes in one spot, would suddenly collectively decide to take off, then fly 400 – 500 yards away to another spot on the ice. Who are the goose opinion leaders?

While I was photographing the sequence of this flock coming into their new “better” spot, I heard a sudden popping noise. It took me a moment to realize it was the sound of the ice cracking under the weight of all those geese.

I suspect “WE”– call us Modern or in Europe Cro- Magnon– thought that our recently extinct  fellow “hominins'”,  to use the latest correct term–  looked odd, as we did to them,  even though we did mix genes.  Most reconstructions are so steeped in reflexive egalitarianism– wrong word, but I’m looking for a synonym for sappy “everything is beautiful”- ism– that all depictions look like that mythical Neandertal on the train mentioned so often in the fifties (TRAIN? Did we all live in New York or London??),  who just looked a bit uncomfortable in his Mad Men commuter suit. Which is why I do love these Denisovans, who would give any Modern kid proper nightmares; I suspect their (and our) western kin, the Neandertals, would have too…

How does this relate to Seven Years in Tibet? Or Magdalena? 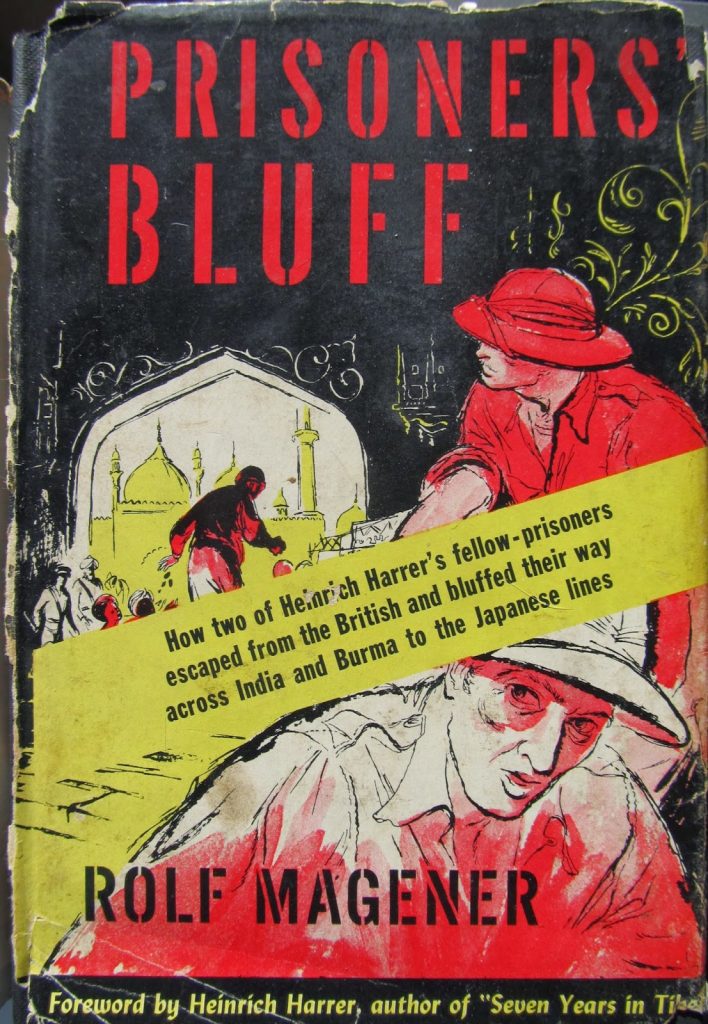 One flew east, and one flew west…

I photographed this out the window last week in Santa Fe. I am not a total 19th Century relic, nor does my nearly 64 years yet blind me to the new. But would someone explain to me how a giant inflatable Hamster (or rather “Hamsta”) in camo pants, giving gang signs,  can be seen as a likely way to sell Korean cars to any New Mexican of any culture? 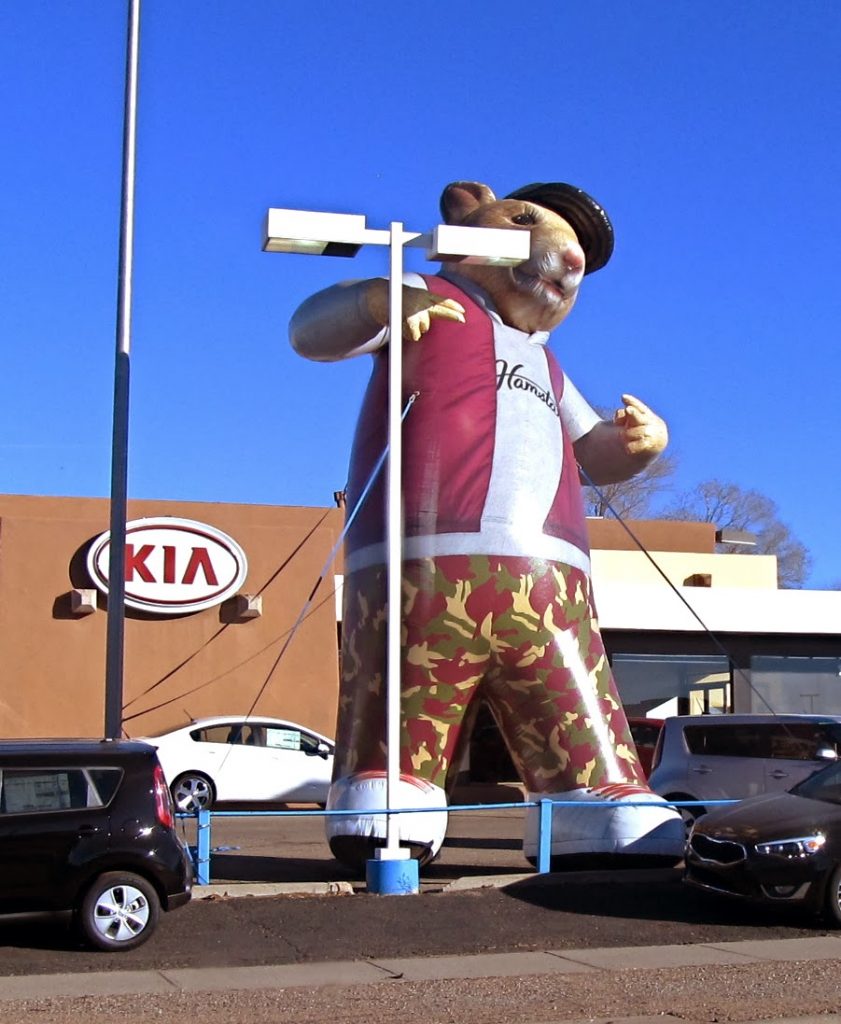 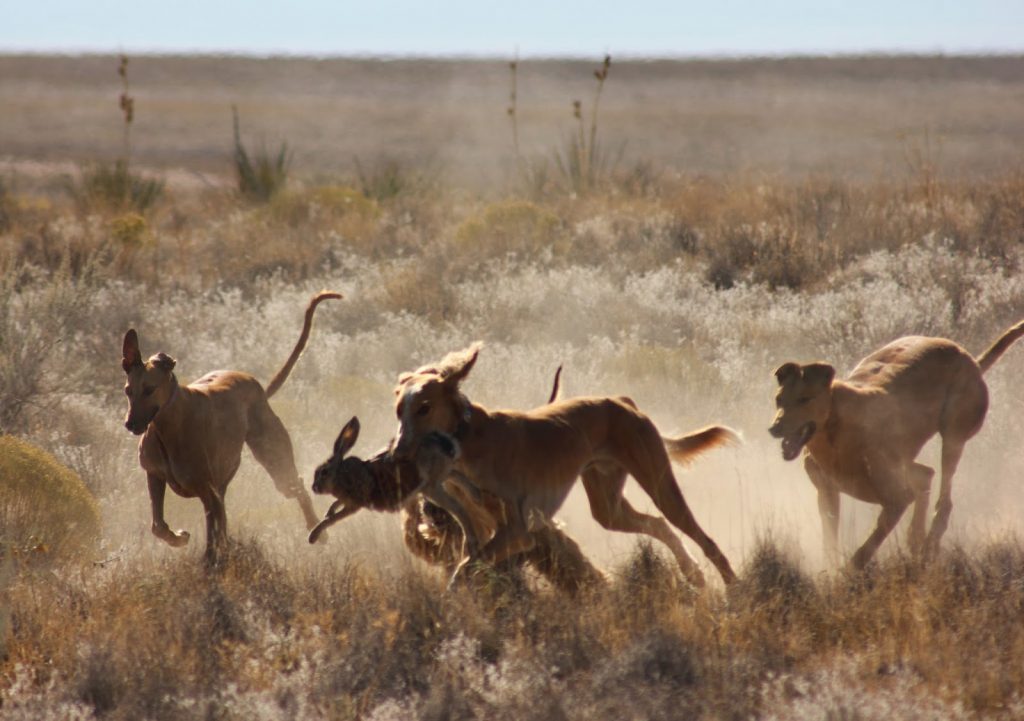 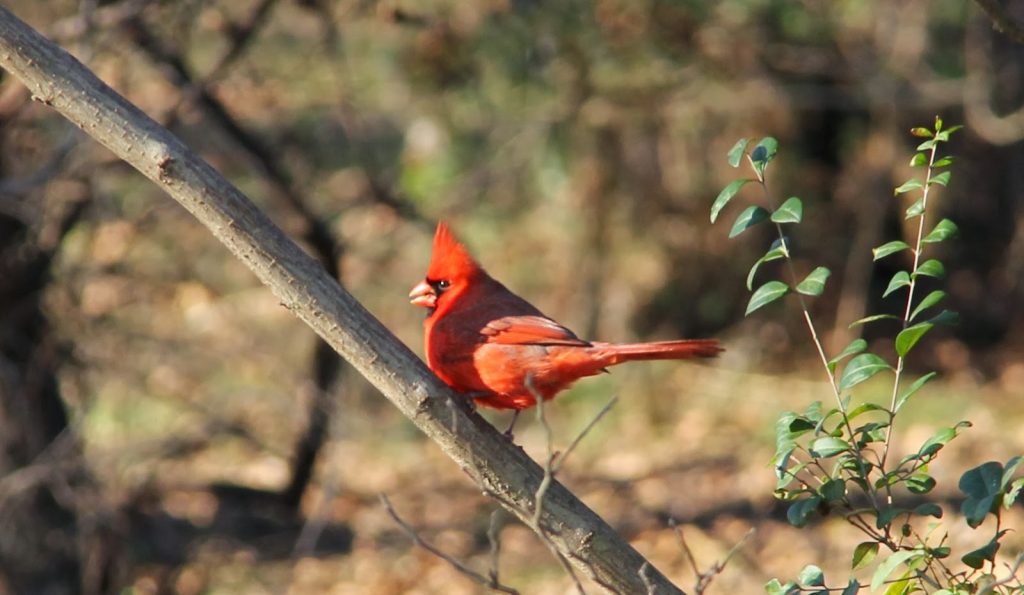 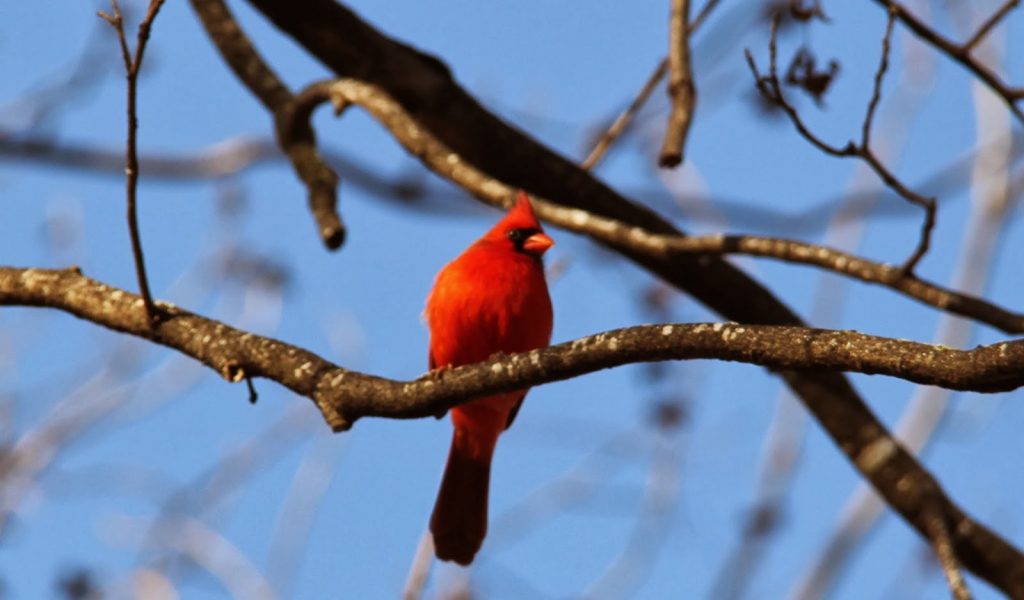 Those of you who live in the East may think this silly, but the Cardinal, one of the birds I grew up with in Tennesse, is one of my favorites. We don’t have them here and it’s always a thrill to see them when I travel back into their range. I took these pictures of a male I saw while walking through the site at Parkin. 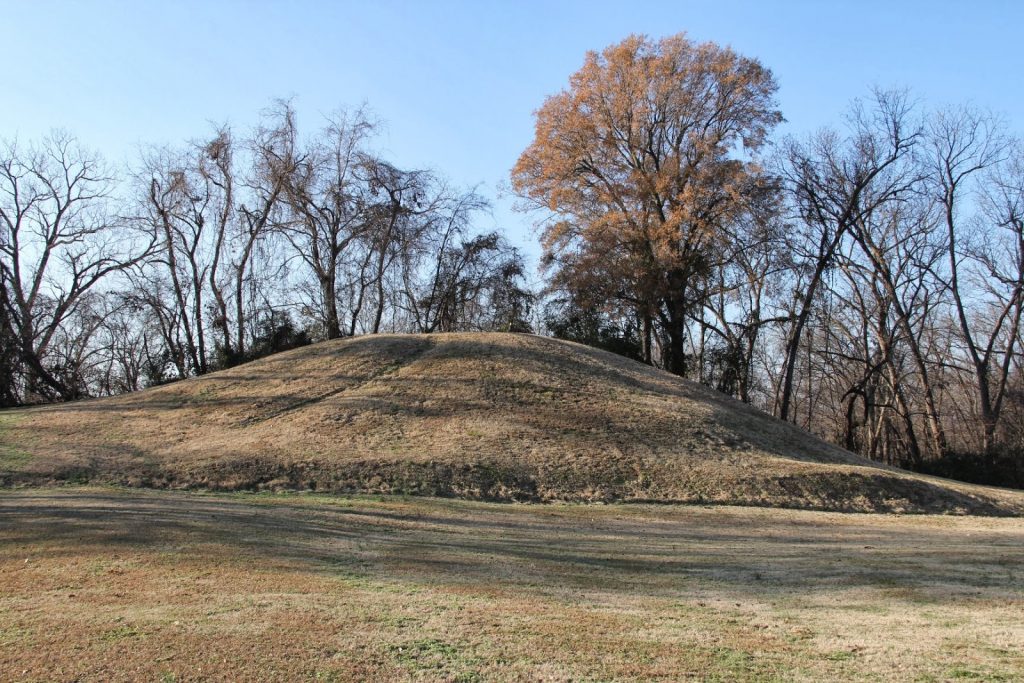 When I was visiting Arkansas last month, I took an afternoon and drove south to Parkin Archaeological State Park outside of the town of Parkin in Cross County. The park contains a prehistoric Mississippian archaeological site that covers about 20 acres and has an excellent small museum. I spent some money at their bookstore.

The site was occupied from around AD 1350 – 1600, and has one temple mound that you can see in the picture above. 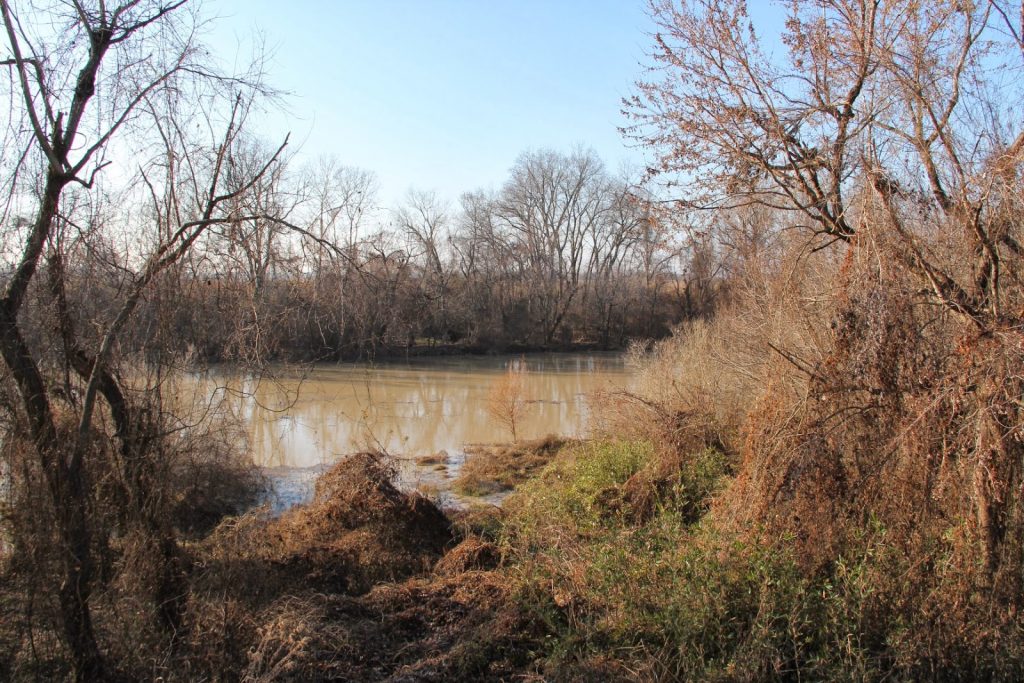 It’s located on the east bank of the St. Francis River, near its confluence with the Tyronza River. The general plan of the site is D-shaped, and it is surrounded by a moat, connected with the river. 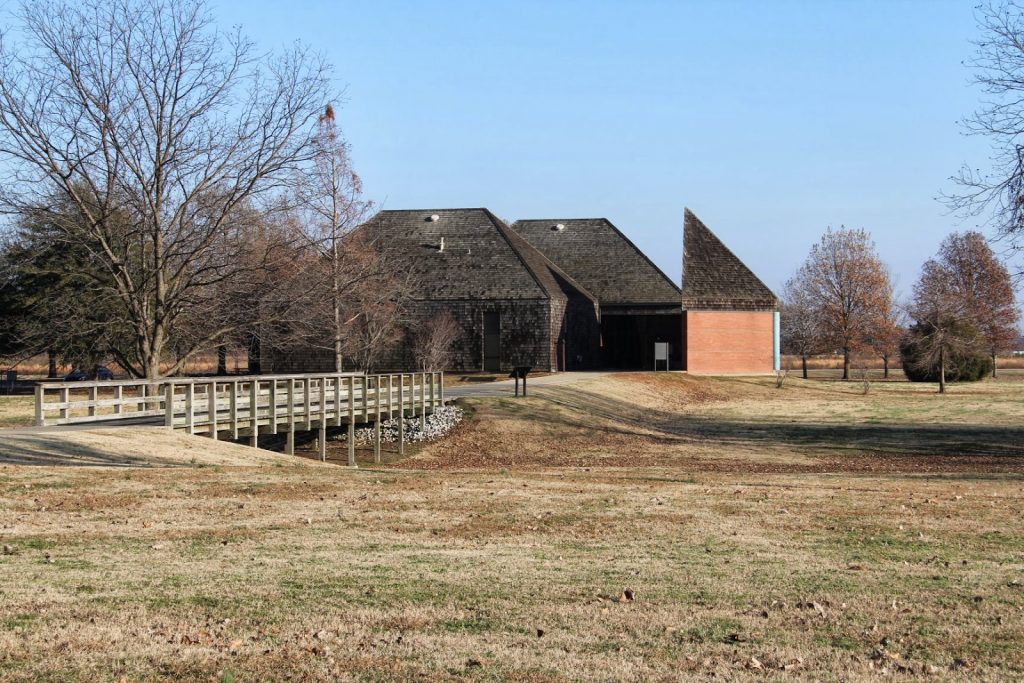 Around most of the site, the moat has been worn down by modern farming and earth-moving. This bridge crosses the moat to the museum on the east portion of the site. 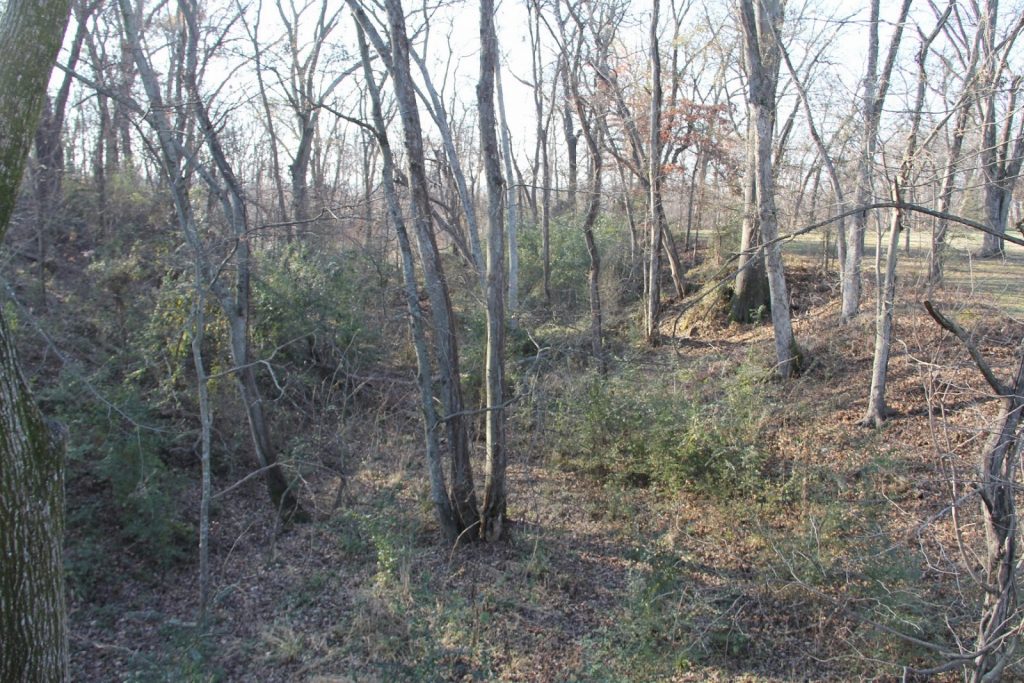 At the north end of the site the moat is still largely intact and you can get an idea of its size here. The archaeologists who’ve worked here have found the remains of a palisade on the inside edge of the moat. 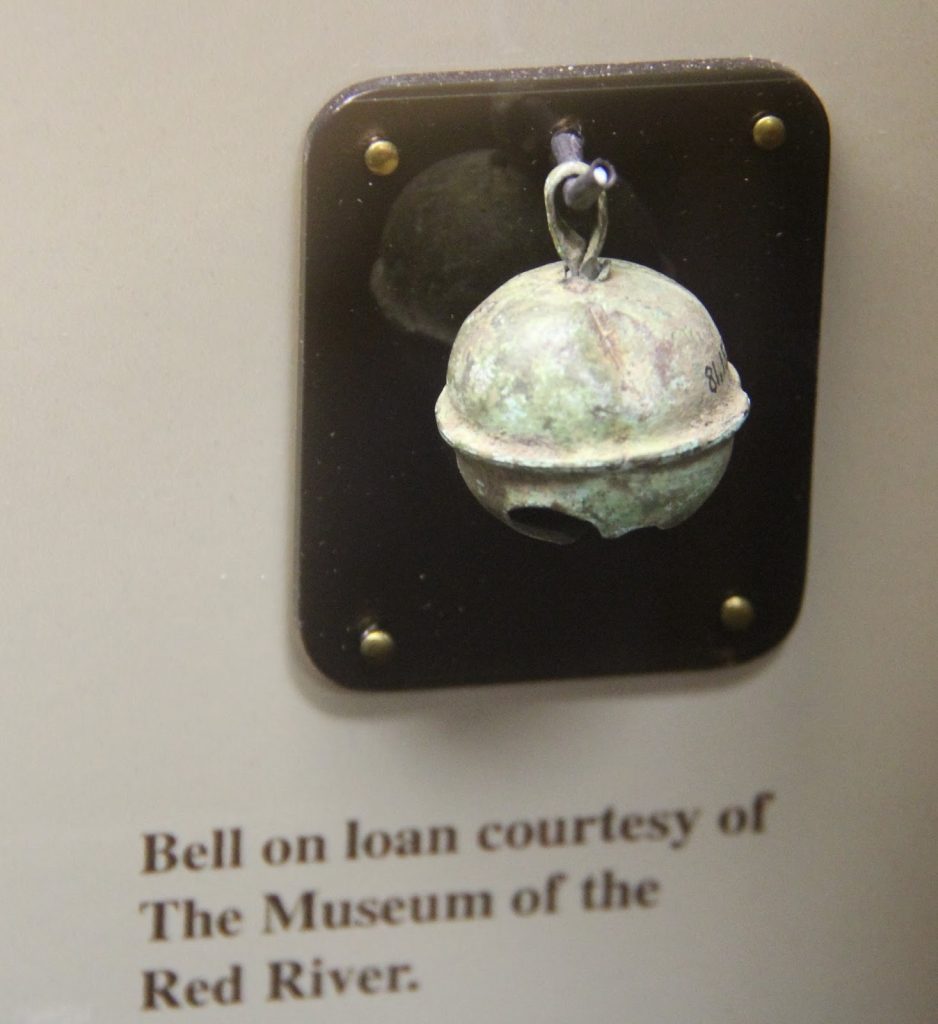 One of the interesting things about this site is the fact that it is almost certainly the town of Casqui, that was visited by Hernando de Soto, the Spanish conquistador, in 1541. Its location and appearance fit with the descriptions of the de Soto chroniclers. Also this copper bell and a glass trade bead were found at the site. 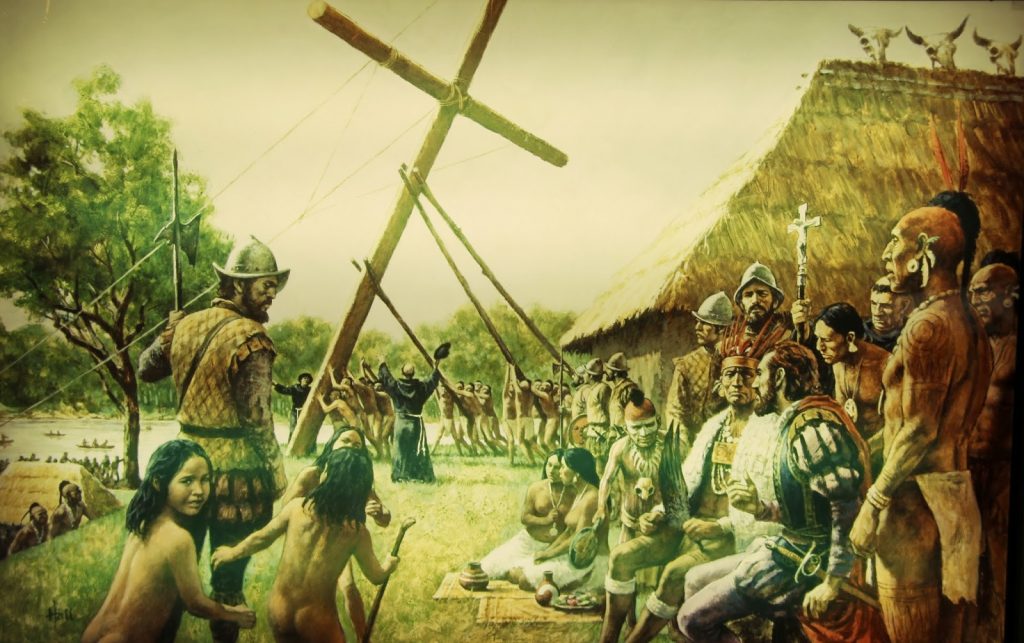 There is an additional piece of evidence. When de Soto and his party arrived at Casqui, the area was in the midst of a prolonged drought. The High Miko (or chief) of the town, greeted de Soto and told him that he had heard of the great power of the Spanish and their god. He asked de Soto if he could give the  people of Casqui a sign of the Spanish god and perhaps that would help with the drought.

De Soto ordered his Genoese carpenter and shipwright to cut down a cypress tree and use it to build a large cross. This was then erected in front of the High Miko’s house on top of the mound. The Spanish and Indians held a solemn procession to the cross where the Spanish priests celebrated mass. According to the Spanish accounts, a big rainstorm broke that night.

When the top of the mound was excavated by archaeologists in the 1960s, they found a large cypress wood post in place in front of the remains of the structure. Radiocarbon assays on the charred wood date it to the 1540s, making a good case that this is the base of the cross.

Also, if you look closely at the upper right corner of the painting above, you will see animal skulls on the roof of the house. The de Soto chroniclers also said that the High Miko’s house was adorned with bison skulls. There were no bison in the area and the Indians had traded for them with people to their west. The Spanish never saw any bison, though they ventured as far west as East Texas. They were told all about them, however and were fed bison meat and given bison robes that circulated in trade. 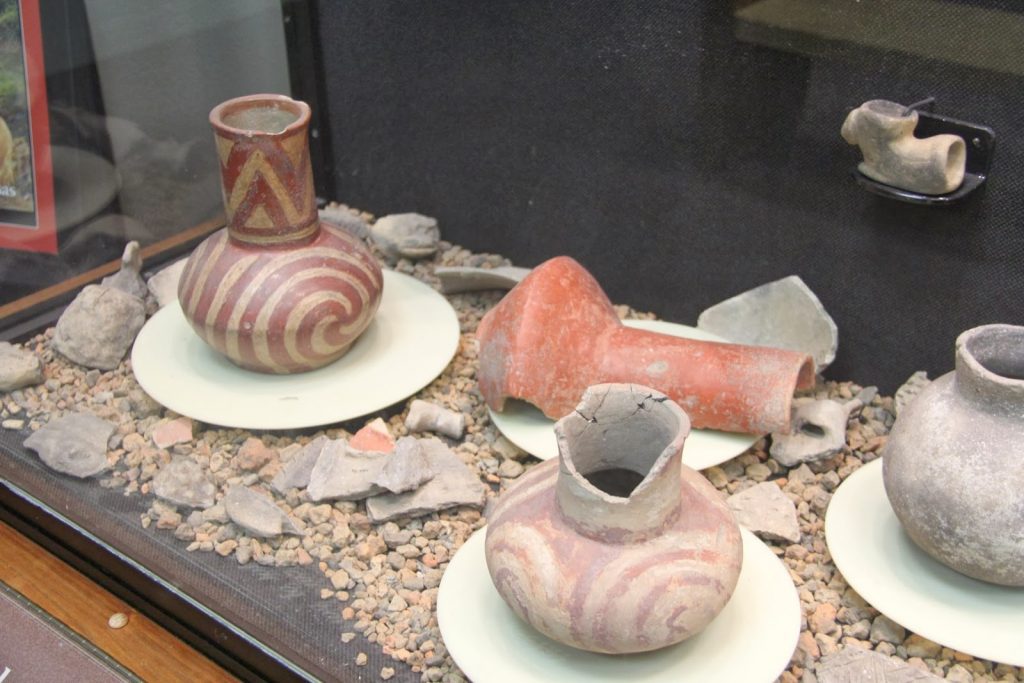 The Spanish remarked that the Indians of Casqui and the surrounding region had the finest material culture and best and most sophisticated architecture they had seen on their multi-year trip overland from Florida. Most ceramics in the prehistoric Southeast were brown wares, and this region is one of the few to have polychrome pottery as you can see in this picture from the museum. 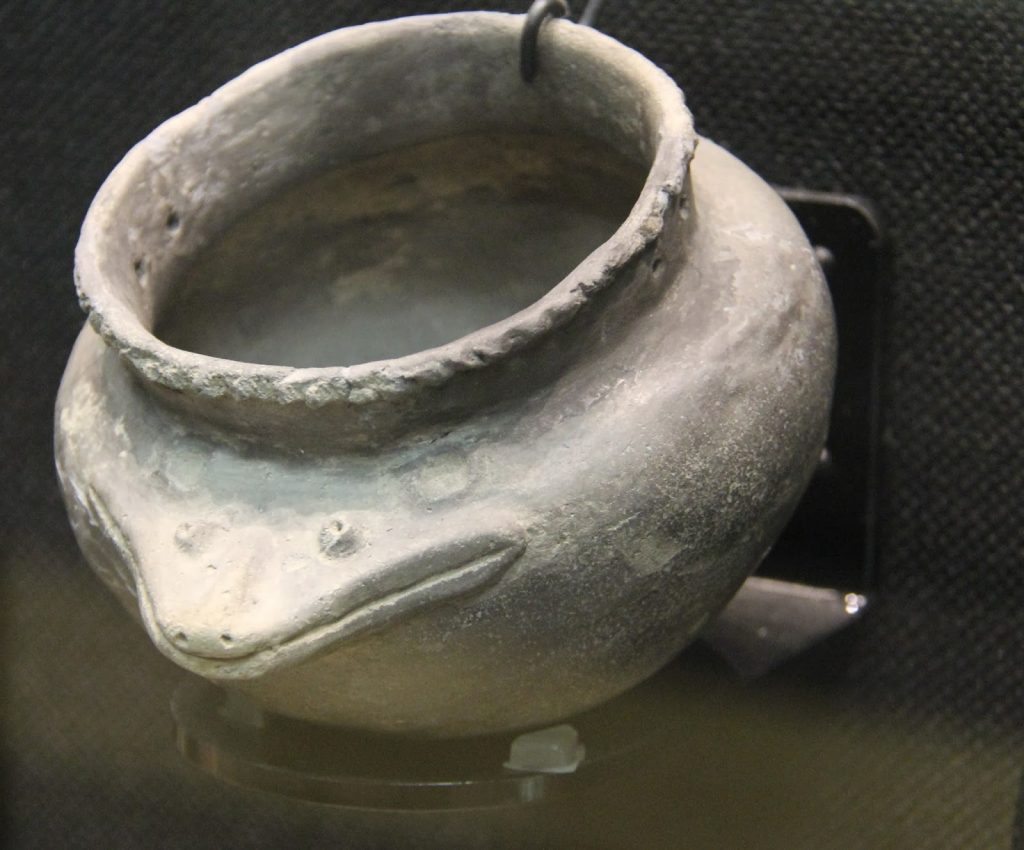 Another common style is effigy pots that depict animals and people. The museum had quite a few of these like this frog effigy pot. 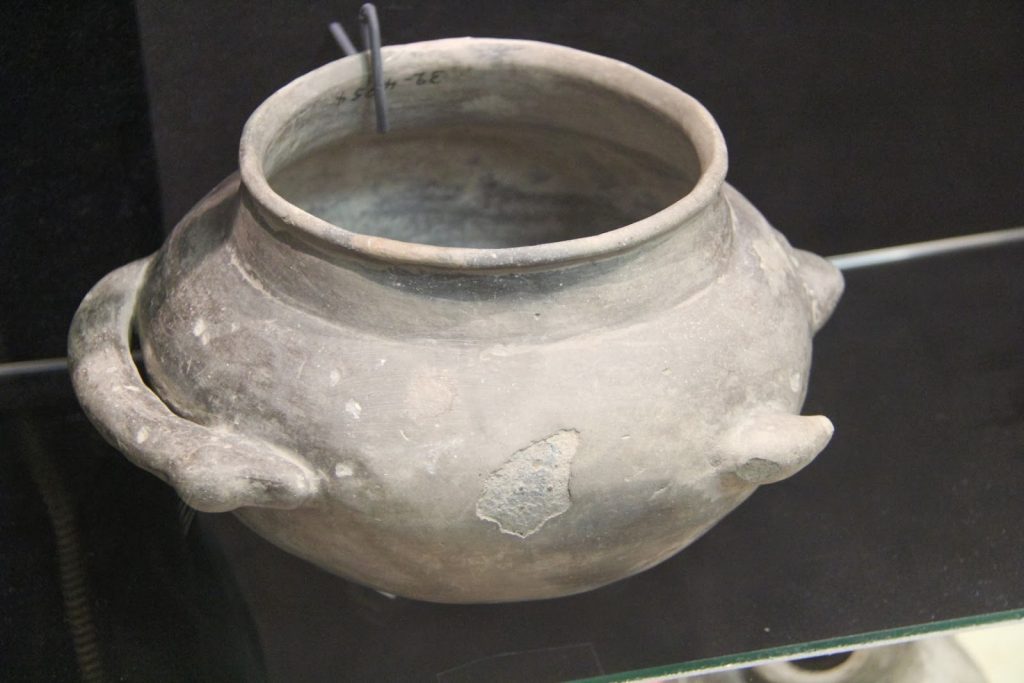 Here’s a goose effigy – very appropriate for their location on the Mississippi Flyway. Duck effigy pots (especially Wood Ducks) are also common, but I didn’t see a good one in this collection. Crested woodpeckers (Ivory-billed and Pileated) were also a favorite. 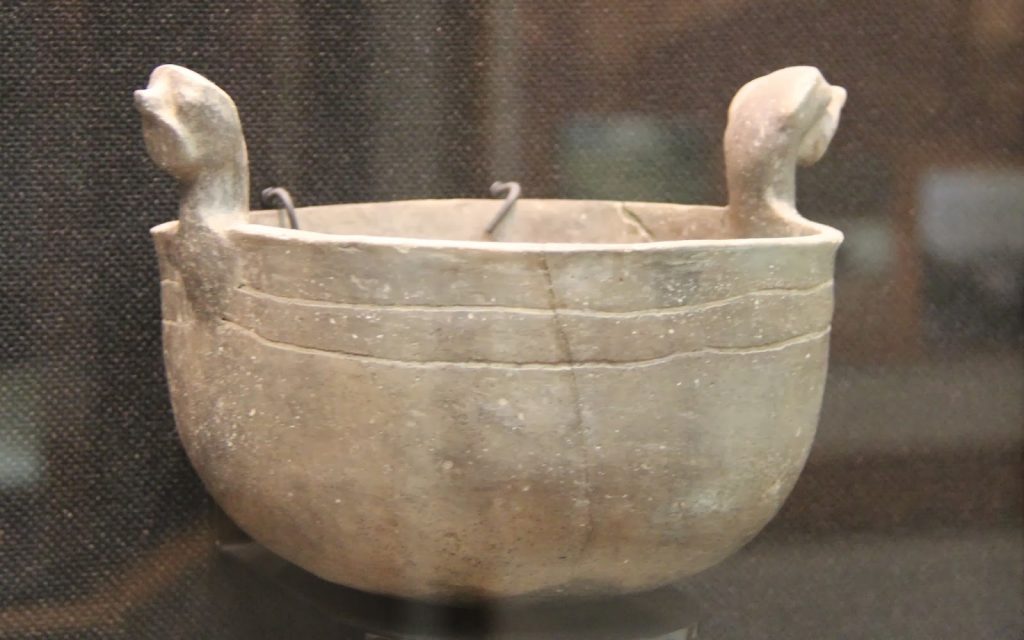 Here is a double-headed turtle effigy. 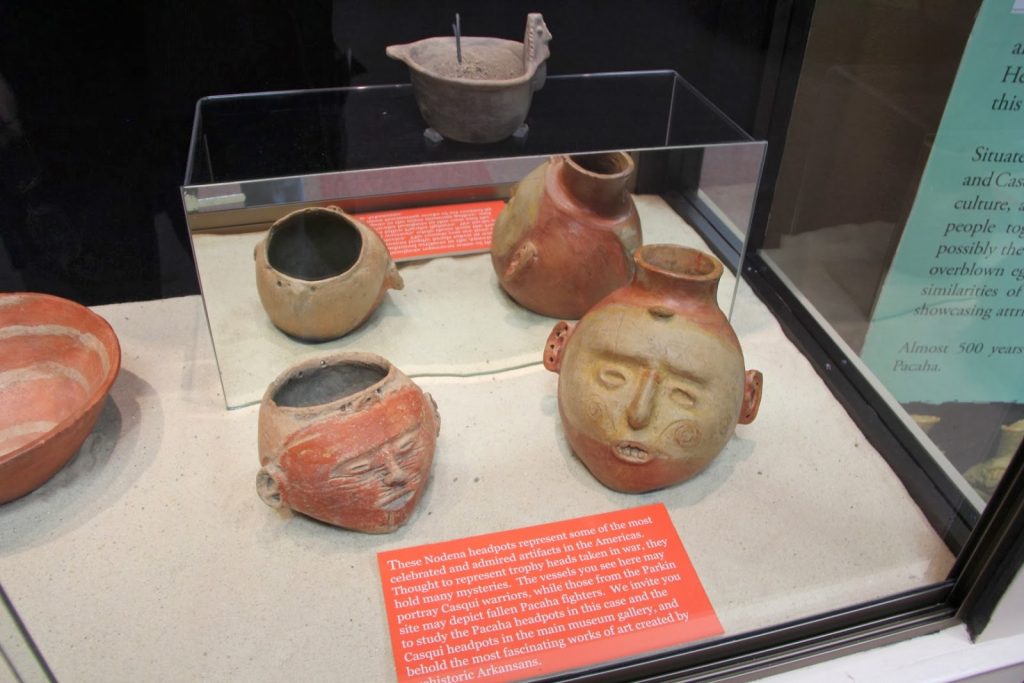 Also effigies of humans, like these heads. These people took trophy heads in warfare and these might be related to that practice. 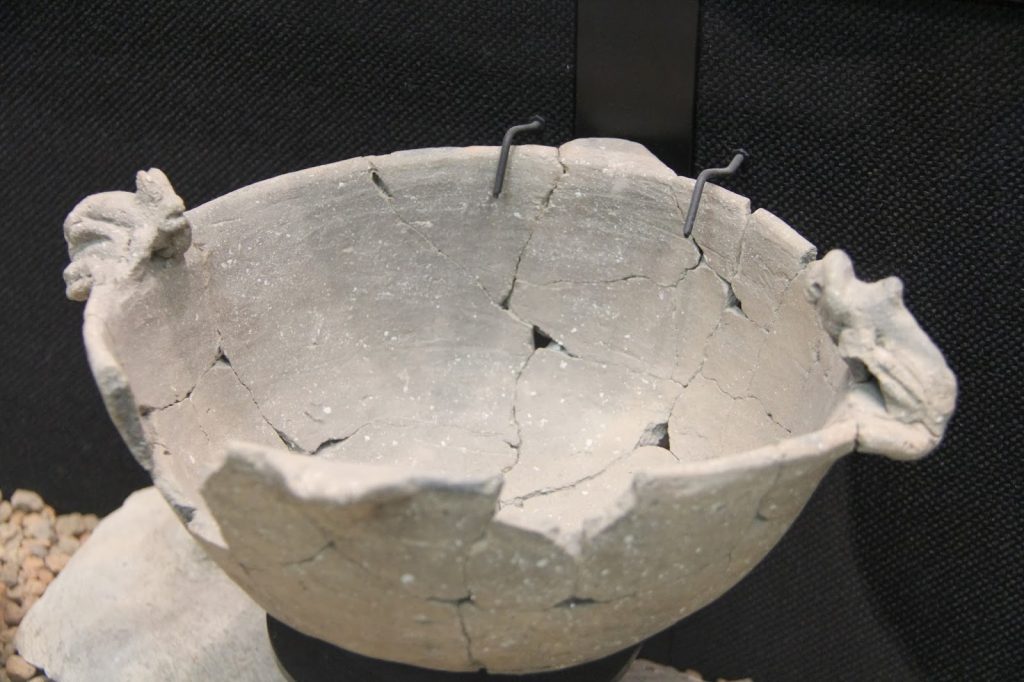 Finally, I saw this comedic piece. You will probably want to click on this picture to “embiggen” it. On the left side of the pot is a rabbit and on the right side is a hunter, bow in hand. They are staring across the pot at each other, mouths agape in surprise.

Another species of raptor that seems to be joining the Peregrine, the Kestrel, and (at least in the Southwest) the Cooper’s as a city dweller is the redtail. This amazingly bold first year bird is apparently observing the habits of my sister Anita St John in her office on Beacon Hill in Boston  (Mass General Hospital, Autoimmune Diseases; 5th floor, which doubtless helps the bird’s confidence). 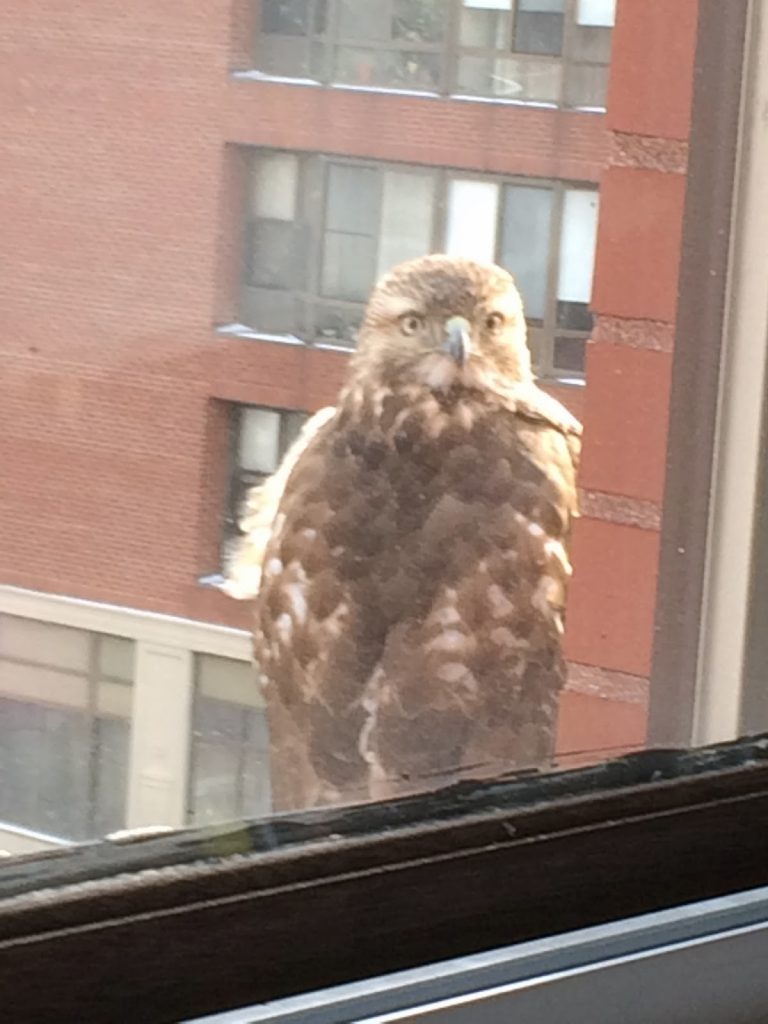 Card game convened by Arthur, with the comment re the card sharp on the right, “But at least he ain’t no cheetah.”

I ignored this and asked where the hell one finds a stuffed cheetah. Reid pitched in: “Says the man with a cave bear hand and mammoth hair.” I ignored this.

Arthur explained, reminding me I had taken his pun too literally (or not literally enough), and had not used my eyes:

” The stuffed leopard, scotch, handgun, etc just happened to be lying around.  And I’d be a fool not to try and make some sort of tableau with materials like that, n’est ce-pas?

“Not too many people have stuffed cheetahs, I think.  They’re kind of small and skinny and don’t make really impressive trophies.  Zoological collections, I suppose.

“Now, perhaps one of those Pleistocene North American cheetahs would do.  Those were a good bit larger as I recall.  Also, since having one of those stuffed and in your house would indicate access to time travel, or at the very least highly advanced cloning technology, it would be the ne plus ultra of Thorstein Veblen’s theory of conspicuous consumption.”

That I can not top. 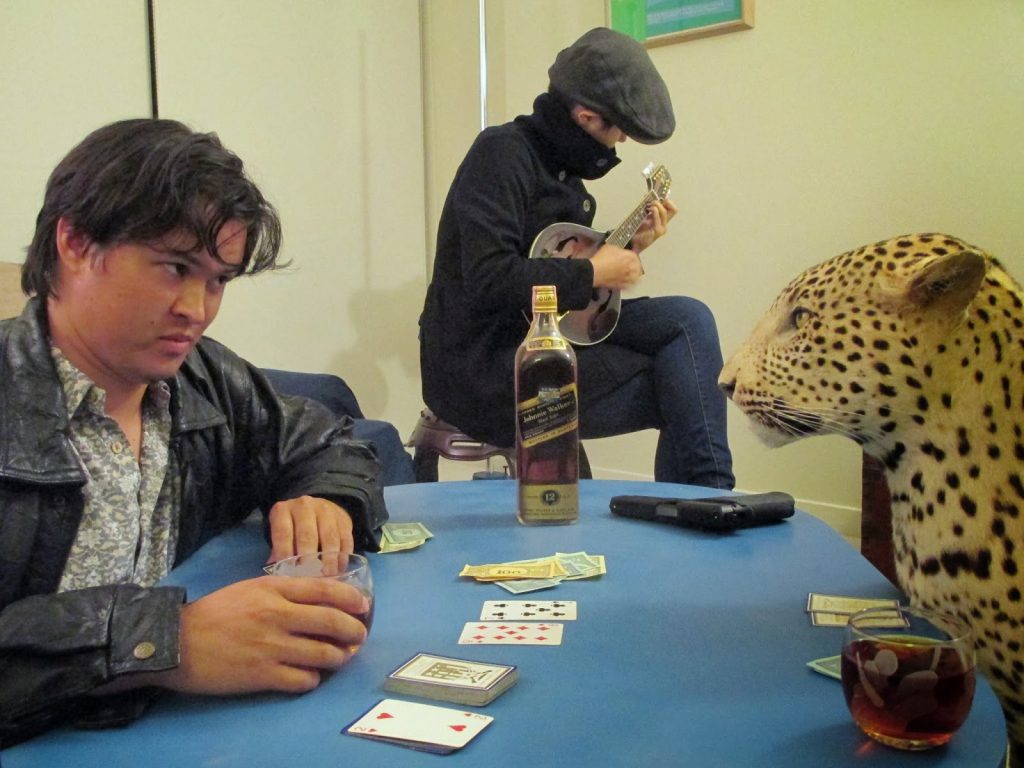 Three simultaneous deadlines this week, after which (somewhat) serious content may resume.

This year’s raiding Cooper’s– actually a little male– flying straight at Libby and the camera as we relocate him to the Socorro bosque and even more pigeons. He still doesn’t look pleased. 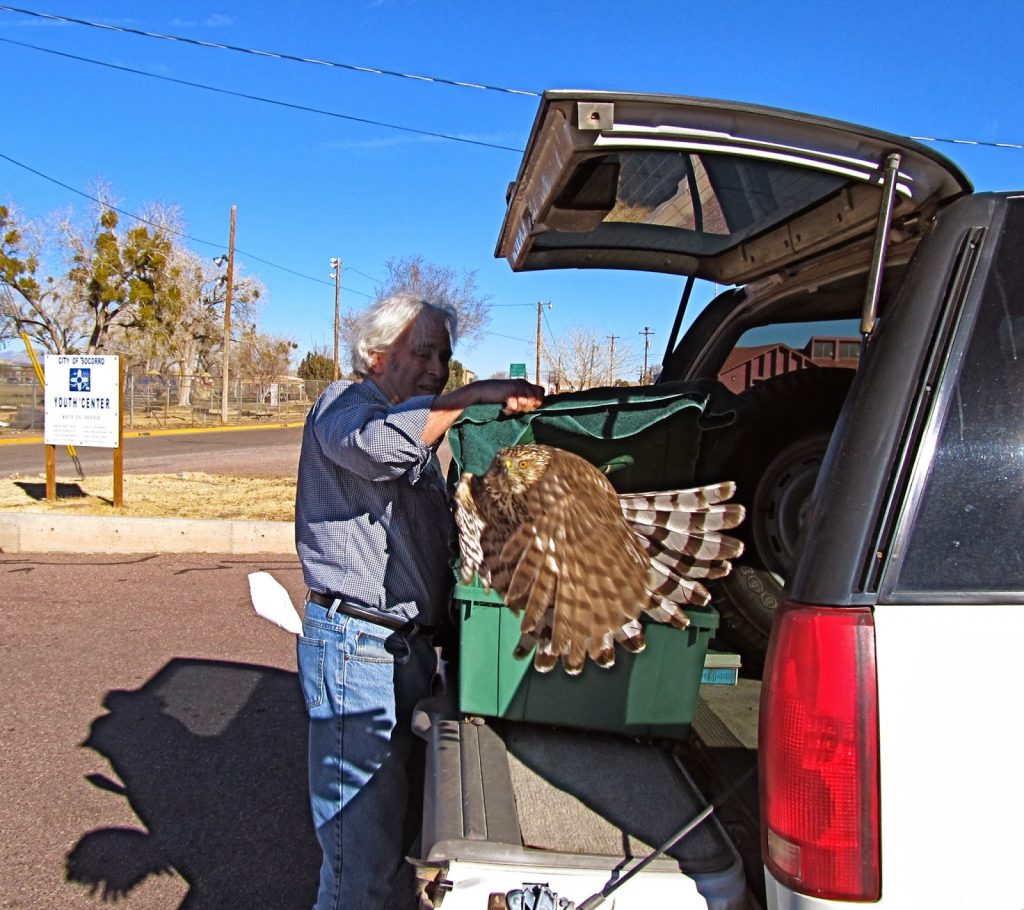