Doesn’t the big black one look like a “psovoya” borzoi? (Russian wolfhound in the west. “Borzoi” in Russian means sighthound– we have “tasy- borzois”, “Angliskaya borzois”–  greyhounds– and so forth). 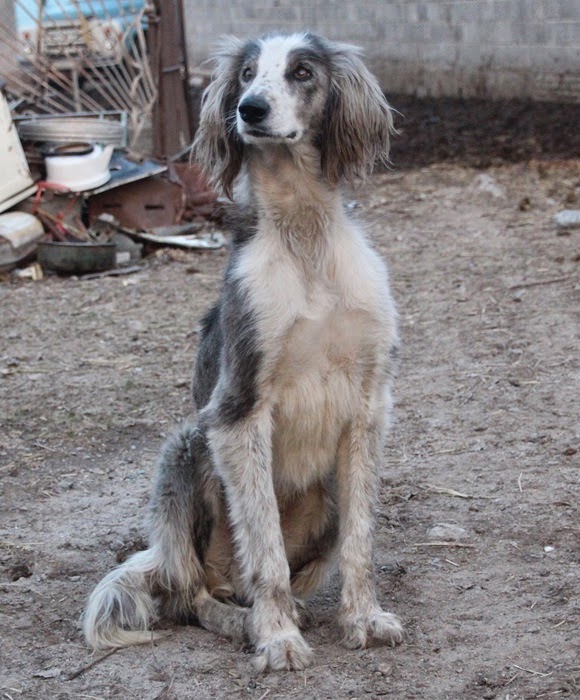 … even for “Reality” TV. Paul Domski writes: “The Discovery Channel has a program called “Naked and Afraid” where they send people to exotic places with no clothes or food and watch them as make their living, what a thrill right?  Anyway a recent episode shot in Bolivia featured this A-hole apparently killing and roasting a Bat falcon.  There are a whole host of people speaking out against the Discovery Channel, with internet campaigns springing up on several online venues.”

Here is a link to their ethics department.

Does it matter that it is a Bat falcon? Well, yeah– I expect that there are a hell of a lot of things easier to catch and better to eat than a five ounce, declining, beautiful, and illegal falcon, and that they just did it for the gross- out factor. This is especially insulting when hunters of legal game are losing their shows on other networks and being insulted on National Geographic.

I have a new essay, “Old Friends”, up in the “Hunting Makes Us Human” series put out by the Center for Humans and Nature. And there is a lot more to find there if you wander around a bit…

Jutta Rubesam lives in Germany and has been a constant presence here through her Nhubia and Taalai, the two talented canine dancers who often grace our Weekend Doggage. In times past she visited New Mexico and took some of my favorite photos of my own dogs.

Now she has been to Kyrgizstan and the shores of lake Issyk- Kul, where she shot this portfolio of the Kyrgiz herders and their hounds. I am delighted to see that they have not standardized and  still retain their physical diversity, from near- tazis to “aboriginal Afghans”. 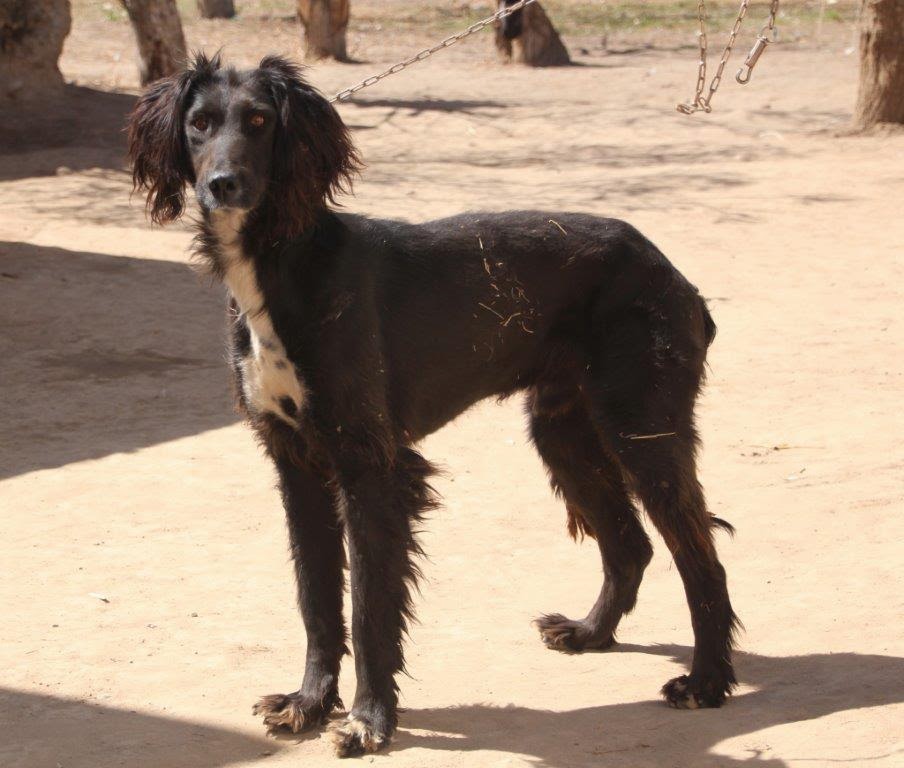 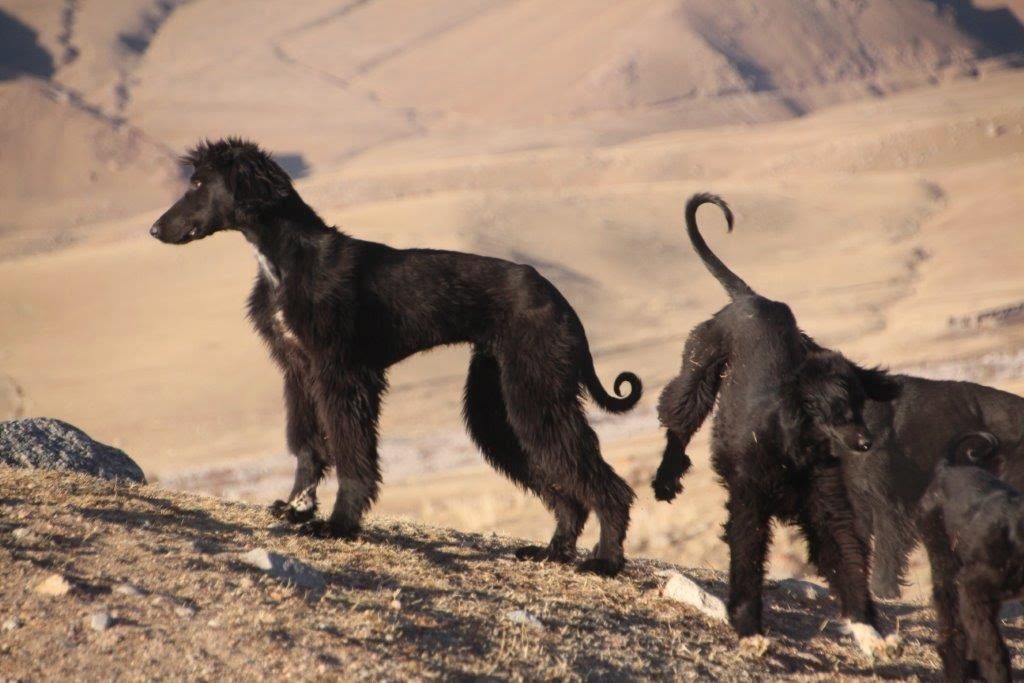 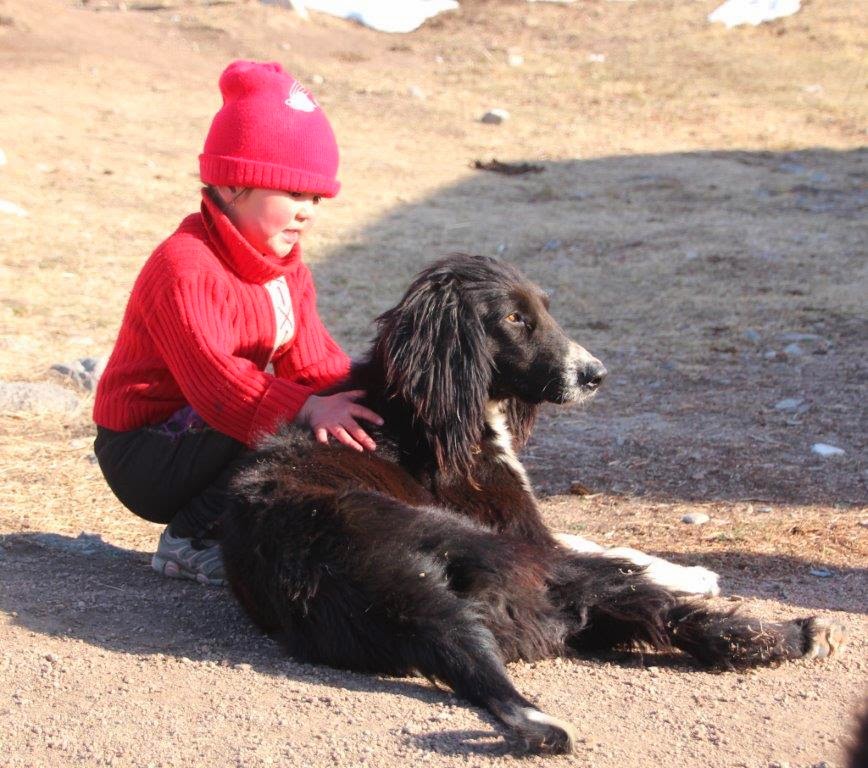 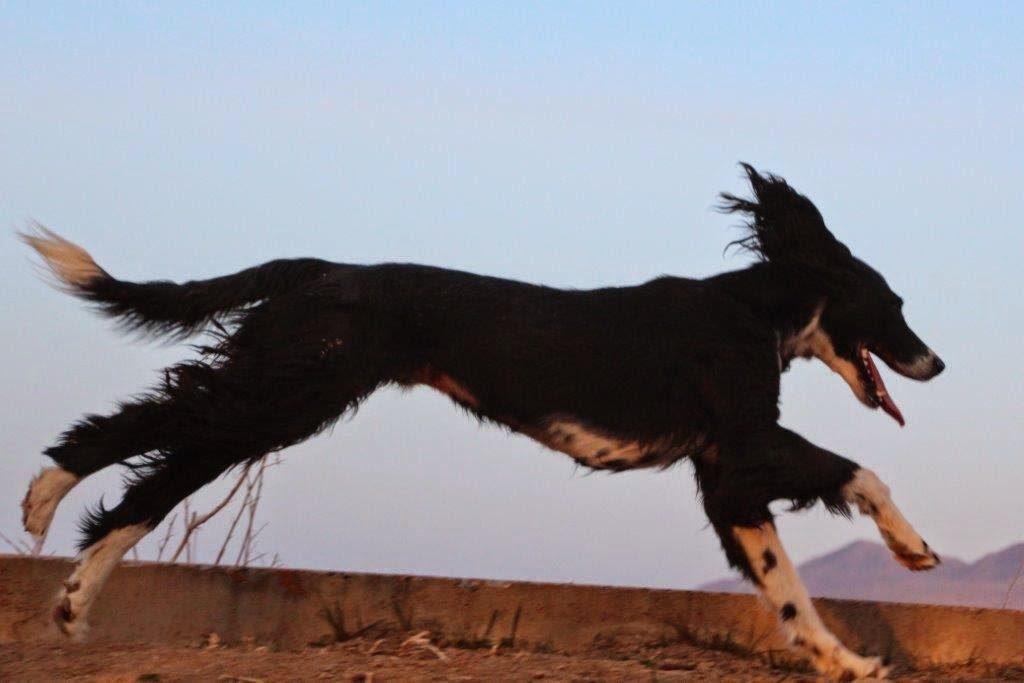 I have been working with a local land conservancy, the Cherokee Ranch, to help them develop a research and education program for archaeology. They already have a geology program started, and the geologists invited me to go on a field visit to look at petrified wood on the ranch property a few days ago.

They have a lot of it on the ranch and you can see a couple of logs in these pictures. I asked to go along for two reasons: One, I think petrified wood is cool, and Two, petrified wood was a major source of tool stone for the prehistoric people in this area. I figure mapping the extent of this stuff is helping define prehistoric quarry sites for me.

I learned a couple of things on the hike. These deposits date to the Paleocene (56-66 million years ago) and apparently petrified wood from the period is rare in North America. Also, the oval cross-section of the logs is due to the fact they were deformed by pressure from the weight of deposits above them before they were mineralized. The geologists are bringing out an expect on petrified wood from North Carolina this summer to identify the tree species. They are currently guessing laurel for most of it, but want confirmation. 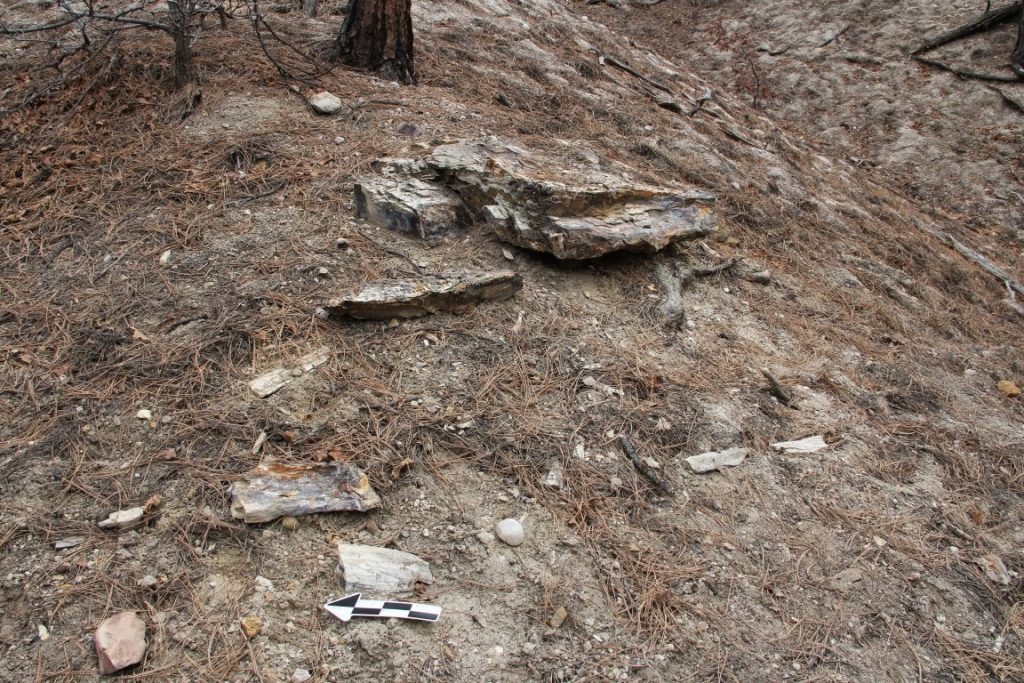 You need to look closely at this last log for important detail.

This log was one of the quarry sites I was looking for. The white egg-looking object is a quartz hammerstone that is surrounded by a scatter of flakes. Looks like someone sat on the end of the log and started making tools. Two hundred years ago, five hundred years ago, a thousand years ago?

As enacted by a younger Lane B, who I am sure will have something to say… 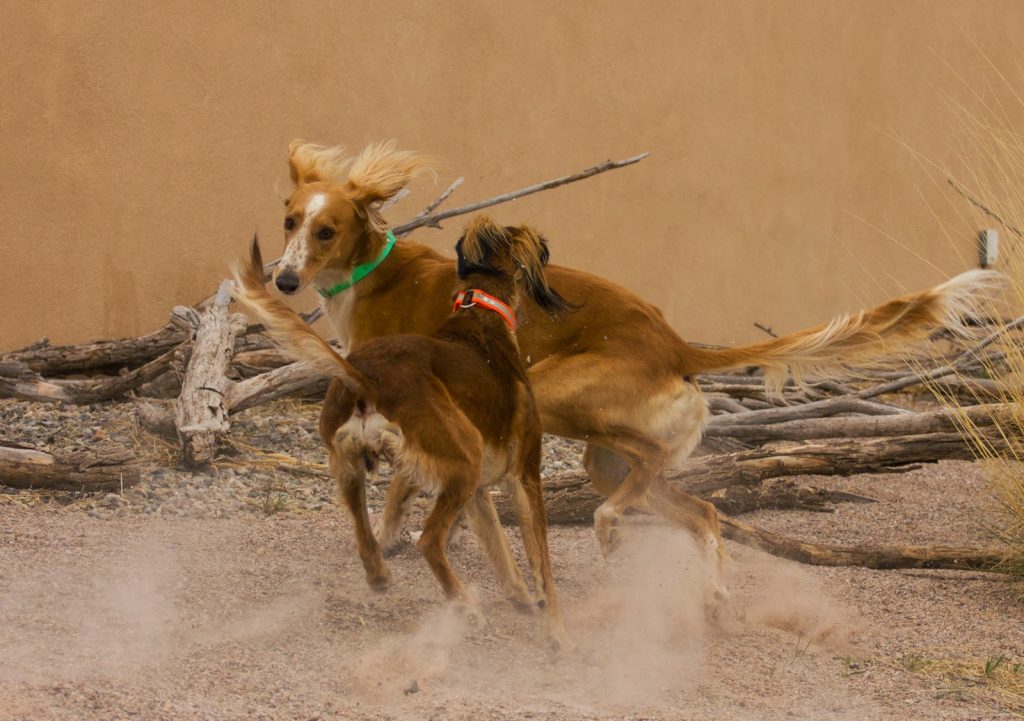 If you think Aymoon seems a little goofy, consider this photo of him in action.

We already know that Rissy is a good girl.

I think there is an unstated human obsession with wolves, perhaps because they contain in essence both the genes of our species’ best animal friend, and the age -old simultaneous rep as humankind’s most visible enemy. Here are a few recent instances.

I have always heard the some of the big Central Asian flock protection dogs are interbred with wolves. As wolves are among their chief adversaries, and the phenotype is so different, I never took the myth too seriously. I was wrong– apparently there is a surprising amount of fraternizing. One of the scientists involved puts it just that way: “”The shepherd dogs are free-ranging, largely outside the tight control
of their human masters. They guard the herds from wolves, which are
common in the areas where they are used, but it appears that they are
also consorting with the enemy.”

The implications of this, in such areas as nature vs nurture, are enormous. Obviously genes aren’t all, or the offspring would not be useful. Training and loyalty must come in somewhere.

John Wilson participated in a “round- up” of some of the breeding Mexican wolves held at the Sevilleta, where they needed to capture a pair to send to Mexico. I was happy to see they are really being kept in isolation these days, having seen evidence of the contrary a few years back– letting in television news helicopter crews for a shoot is not isolation! Also interesting was how passive and shy the wolves are, offering no resistance. The workers formed a line and swept down the hill to where the den boxes are; the wolves retreated to the boxes; the volunteers then opened the den, pinned the wolves, trussed them, drugged them and carried them out. No one, human or wolf, was injured.

Some notes from John (odd format is from his notes):

The best lack all conviction, while the worst
Are full of passionate intensity.

Fools dominate the news. Too many good people in the west support a thuggish blowhard who refuses to accept the law while apparently trying to start a war;, one who even brags he will put women on the front line. As I said to the writer below, this is not a horse you want to hitch your wagon to (he agreed, having just written the same thing to a friend!)

Meanwhile, too many decent urbanites with little sense of western matters seem to yearn for state power to strike him in a way they may come to regret. See here for a frightening look into the militarization of our police forces, a phenomenon that seems to have started with the “war” on drugs– do we really need internal wars, like Mexico’s? — and shows no sign of stopping, with supporters on our so- called right AND left. It seems strange to worry about Putin’s psychological warfare in Ukraine  before we put our own house in order.

Nor can those with only a vague sense of what the west is understand how passionately those whose families have been living and working the land for generations feel about what is their only home. Complexities of legal ownership abound; but instead of who the land belongs to, think of it differently: who belongs to that land?

So here is a thoughtful guest post, a musing on the situation by a rancher and writer who also worries, and brings both a rancher’s perspective and a spiritual dimension that I cannot easily write about. As JP says, it is an appropriate day.