What is happening in this photo? And what species, and where? 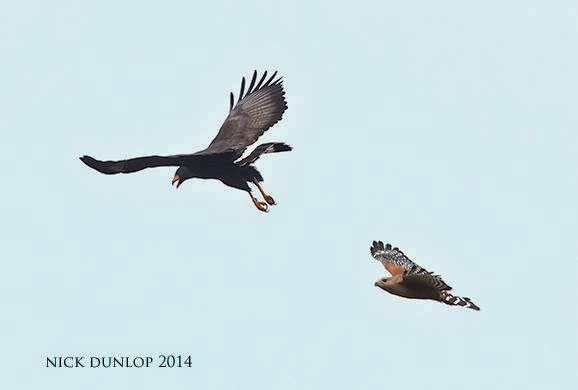 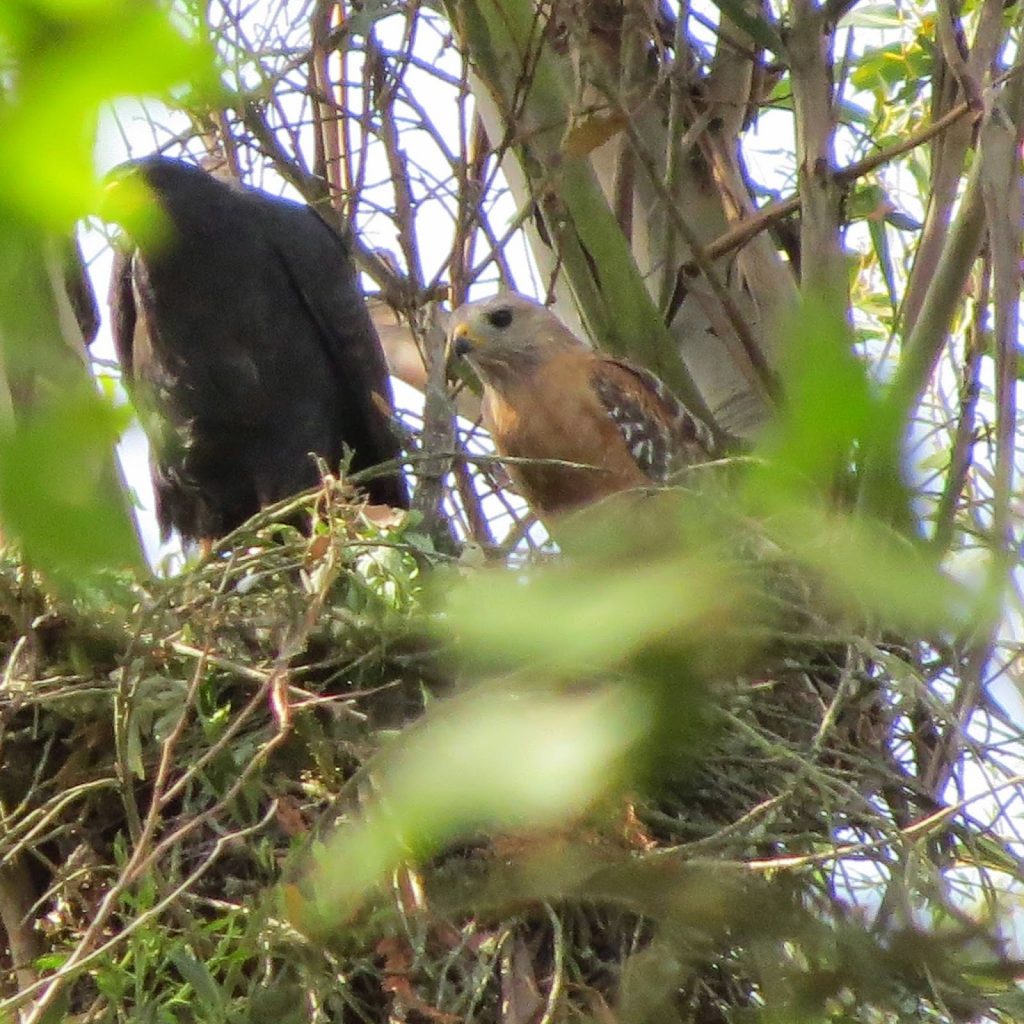 Magdalena mountains last weekend, by Elizabeth Campbell. This is less than ten miles from us, mountains thrusting up to nearly 11,000 feet from a plain over 6000, between us and Socorro 2500 feet below on the Rio Grande.

Micaela’s Firat and friend in Finland 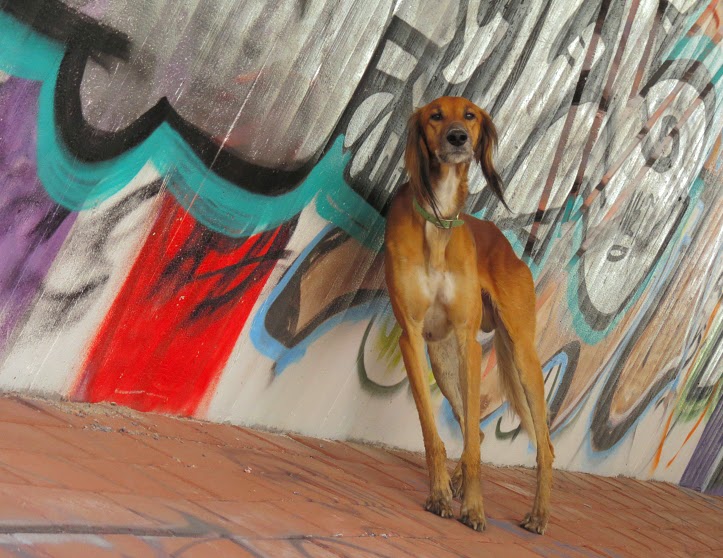 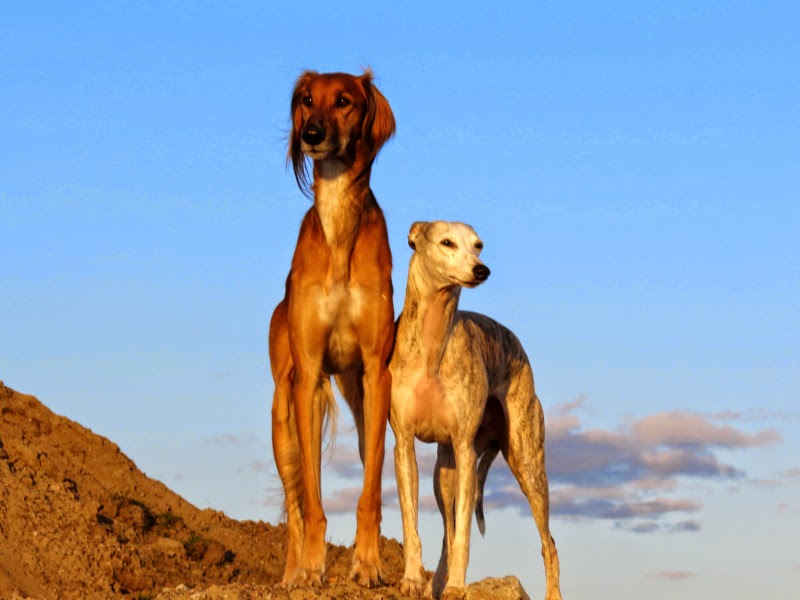 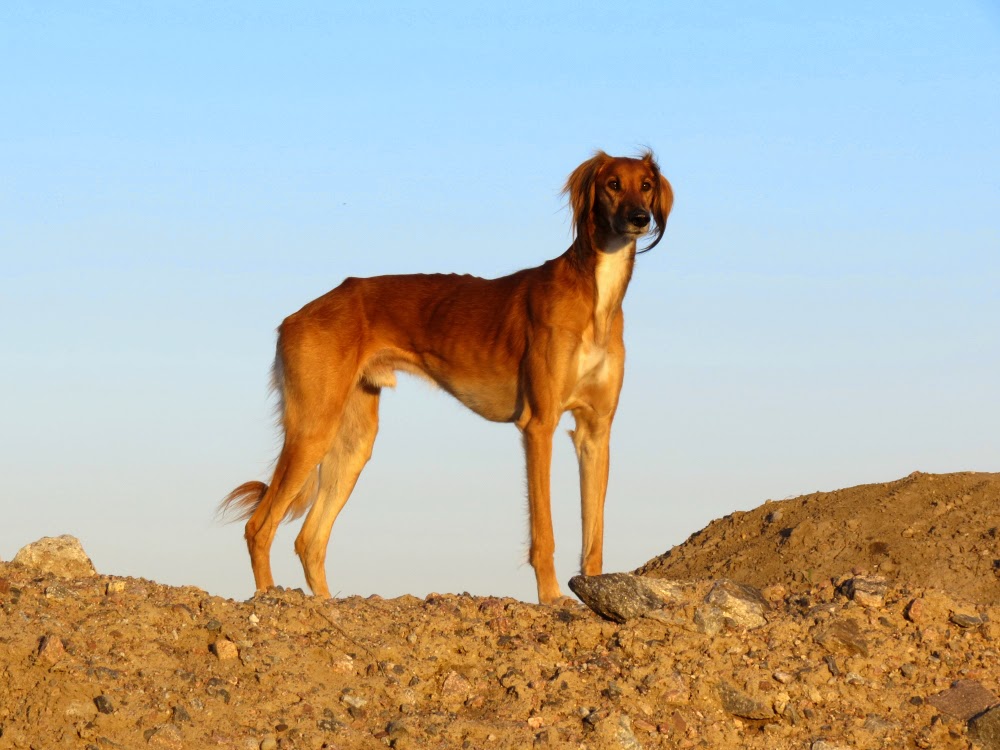 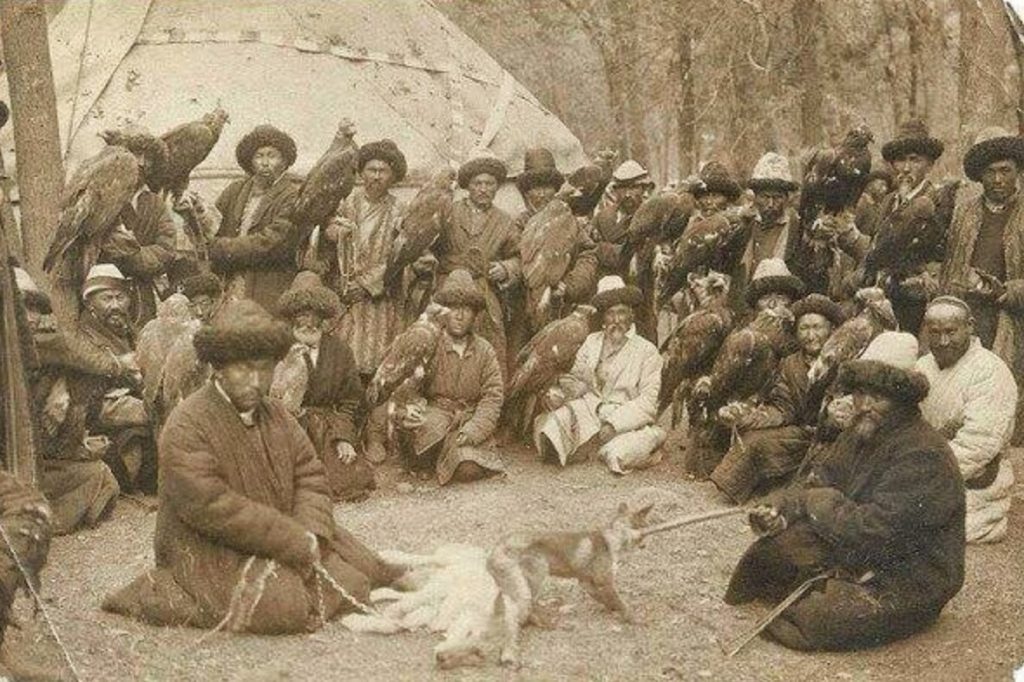 I have put up so many posts because I need to break from blogging to get a real start on my next book, the much- postponed Silk Road dogs travel- science- and- more volume that is closest to my heart, and because I cannot spend so much time distracted (or at the uncomfortable desk– I am trying out a new laptop courtesy of my friend Beth). I suspect once it is really rolling I can return, I hope sooner than later. But my meds make me infinitely distractable, and I must get control of my real work again. Wish me luck!

I was corresponding with Jessica, who sends me great books on birds from Princeton Press (THE best ornithological publisher), when we strayed into bees. (She sent me this excellent book on North American bumblebees). It later occurred to me that my note to her might interest readers of the blog.

I spent a summer not long ago- 6 years past?– collecting native bee species at the Sevilleta reserve, hundreds if not thousands, and mounting and labelling them, for money.

The hardest part was mounting the microbees a quarter of an inch long– too small to pin. I would take them out of the freezer to “relax”, in this case thaw; determine sex (wing venation– if you look below the box in the pic you will see my “guide”); glue them to the side of a pin; then after the glue dried and before the bee did, expose the genitalia of the males, the only way to tell some species apart–! (If you don’t believe me read Nabokov on his butterflies). I sat in front of the air conditioner with a bottle of chilled Russian vodka, a stack of 35 mm film canisters full of frozen bees, and a sheet of labels, and just locked down until I had at least a full box.

It was interesting work in some of the best desert I know, for good money, work I can no longer do since Parkinsonism makes me too clumsy, but it sure made for some odd bar and party conversation! 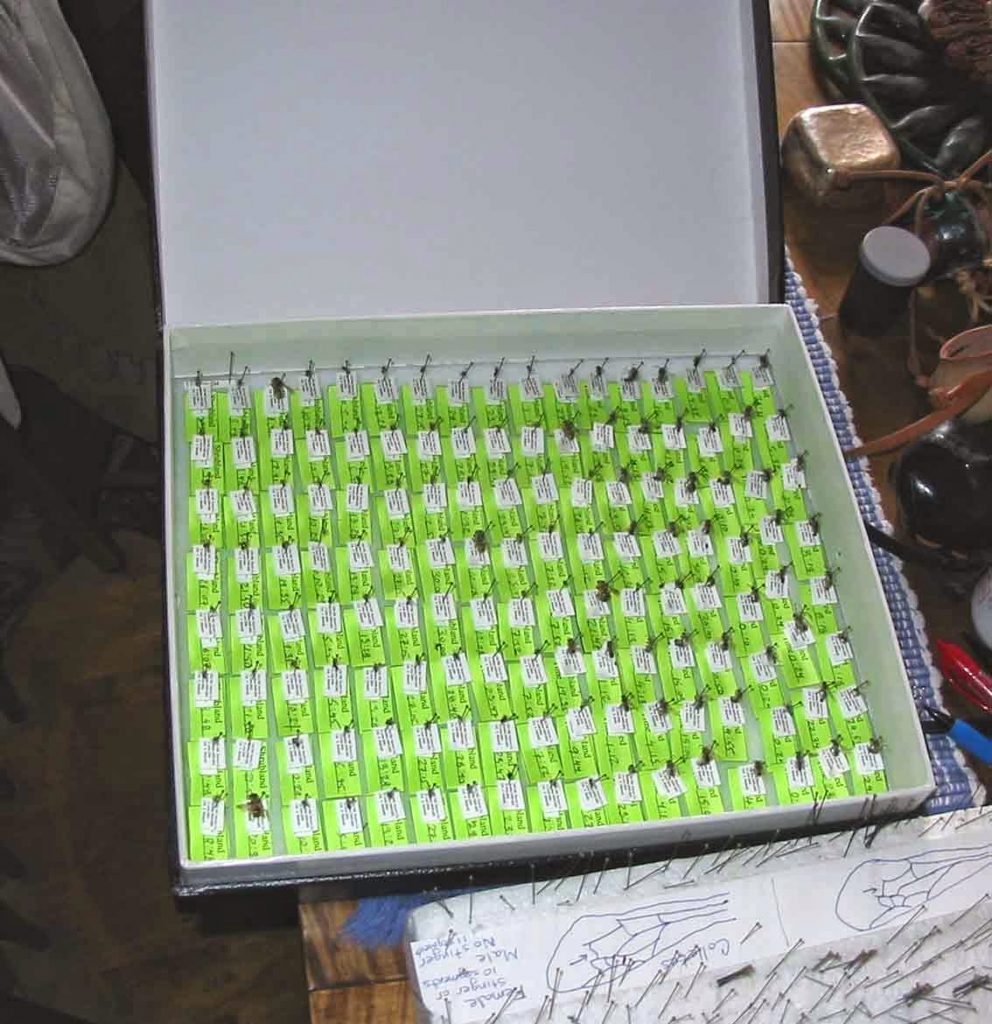 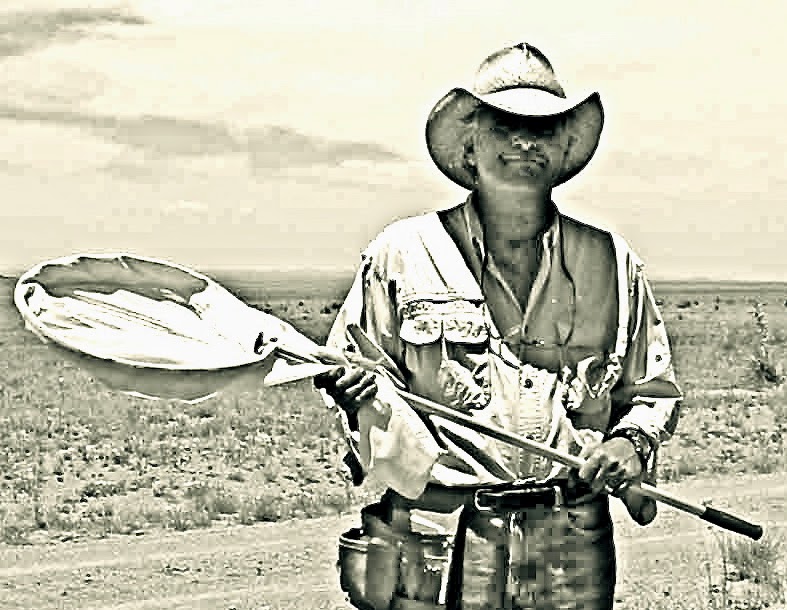 My friend whose cyber name is “Lucas Machias” sends more links than anyone I know, and I can’t keep up with him. His favorite subjects include but are not limited to wildlife art, paleontology, evolution, and sporting lit. I have decided to occasionally give him a post of links of his own; there is no other way to keep up! With no further ado:

Predator prey relationships are more complicated than we think.

Never mind winter; drought is coming; or, it can get much worse.

We have all seen them: an amazing clueless Amazon review.

Lucas reads a lot more fly fishing books than I do. Here is one about Russ Chatham’s fishing mentor.

“Hitchcock would have loved it.” Mutating birds at Chernobyl.

The Golden Eagle’s genome has been sequenced. Interesting that it indicates a good sense of smell!

For all Roy Chapman Andrews fans. Unfortunately the internal link doesn’t seem to be working; I may Google it later.

Svante Paabo’s book on Neanderthals is out!.

I have been promising a review of Paula Young Lee’s Deer Hunting in Paris for what seems like forever, and I apologize for taking so long. Part of it was thinking my way through to what I thought exactly or critically. I loved it and found it intensely quotable; on the other hand I found the tone of some passages a little frenetic, full of word- drunk riffing, perhaps fueled by a deconstructionist lit grad student’s love of multiple meanings.

Curiously, my friend Gerry’s positive but slightly critical review here, which faults her editor for not disciplining her tendency to wander, made me realize that I like such digression! I decided my best way to give you a glimpse of her work was to summarize, quickly, then quote. Read Gerry, then my selections, and you will know whether this sort of book is for you.

Deer Hunting in Paris is called a memoir, though Gerry thinks of it as a journal. Its double subtitles stretch to a Victorian length: “A memoir of God, guns, and game meat; how a preacher’s daughter refuses to get married, travels the world, and learns to shoot.” Paula Young Lee is an ethnic Korean preacher’s daughter from Maine, who when the book opens is living in Paris, France, from which she travels regularly to Paris Maine and Wellesley Massachusetts, to hunt with her boyfriend.

The book progresses gradually from her childhood through her relationship with her boyfriend (a contrast to her in every way,  Republican to her Democrat, wanting to get married while she doesn’t, country to her city), while describing her education as a hunter. Meanwhile, she riffs compulsively about everything from the nature of hunting to cookbooks to the amazing hilarious Maine sellers’ newsletter Uncle Henry’s and the nature of writing. Some of her observations are serious, some inspired, and some silly, which doesn’t mean they’re not fun.

Each of these are best demonstrated by quotes. Silly? From Uncle Henry’s, a few examples of ads :”I have an unknown sex bearded dragon… Arthritic salmon with flies in box… 3 year old running walker female trained on coyotes cold nose will run nonstop parents were cat dogs… gaggle of running gravelys too old to pull the straps too old to walk behind.” Or her quotes from the index of an 1830 cookbook implausibly titled The Cook Not Mad: “BEDBUGS, to keep clear of; COOKIES, nice that will keep good three months; FEMALES’ DRESS, to put out when on fire.” (I want that book!)

On the writing life: “I wasn’t looking for love, drugs, yoga classes, or any other ‘girl’ narratives attached to stories about free spirits traveling alone. When your trips abroad are being paid for by your father/divorce settlement/ publisher, you’re not free. You’re expensive.”

Pure riffing? How about this one on Squirrel Nutkin? “The death of mice, moles, and minnows don’t get most folks riled up about animal cruelty, especially since cute fluffy squirrels are doing the killing. So what if they’re offering up lesser animals as sacrifices? It’s the only way that the owl won’t eat them, for the powerful are blessed by God, and they keep their wealth by doing His will. Only a nut rejects a perfectly profitable system that forces the poor to beg for food and pay a hideous price for the privilege. Hey ho… Nutkin! He’s a red-headed rebel, a leader of the autonomous collective, a socialist- communist- Nazi- anarchist- terrorist- tree- hugger out to sow chaos in Eden. Wherefore he’s the Devil’s handmaiden.”

Above all, and past all the silliness, she is drop-dead serious about the nature of hunting. “I now insist on eating birds and mammals, preferably wild ones shot by the man I love but won’t marry, their bodies made into meat by our hands joined together. I don’t feel guilty about it, sez the girl for whom a bee sting is lethal. Death is the promise. It is an intelluctable truth, for Nature is a murderous mother offering food every where we look… I am hungry. Such is the human condition. We hope and despair, rejoice and revile, celebrate and curse the profane absurdity of being apes rigged up in angels’ wings.”

Maybe I love it because I am a discursive, digressive, riffing writer myself. But I do, and I am liking it better even as I mine the text for quotes. I’d hunt with her any time, and will look forward to anything she writes.

Tim Murphy is not just one of our finest living poets, and the only one I know who celebrates what I have called “our Siberia”, the chilly plains of North Dakota. He is a living rebuke to stereotypes: a farmer, a businessman, a Yale graduate who studied under Robert Penn Warren; a classicist who writes about dogs; a gay man who is a practicing Catholic; perhaps above all, at least for subjects, a passionate bird hunter who has written the only poetry collection I know of that is dedicated to hunting. I have written about him in my book of one hundred books. Here he talks about all these subjects and more on North Dakota TV.

From Paul Zarzyski’s Steering with my Knees, a real poem by a real poet who is also a real cowboy. And once more demonstrating that everything is attached to everything else, it is about John Moore’s sister! ( I might add that Paul has drunk a few beers at the Golden Spur, but sometimes I think that EVERYBODY has). 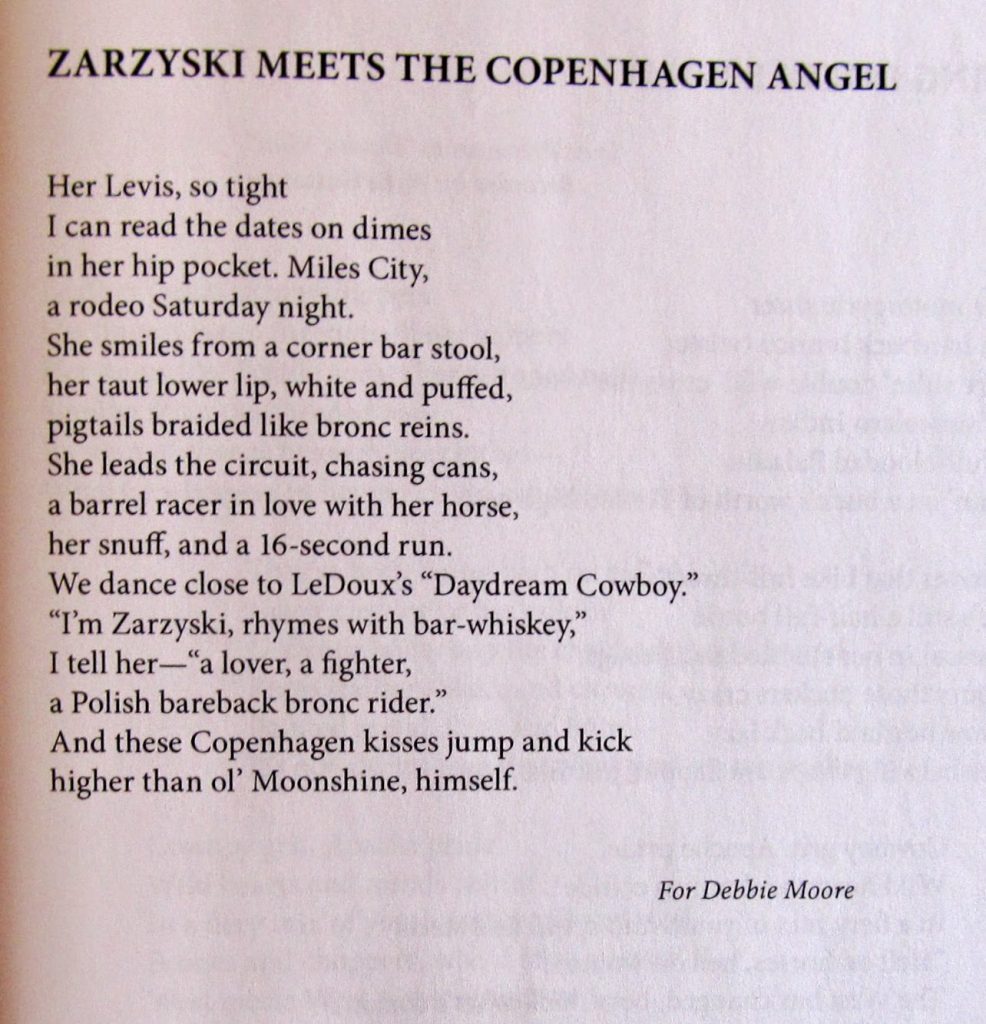