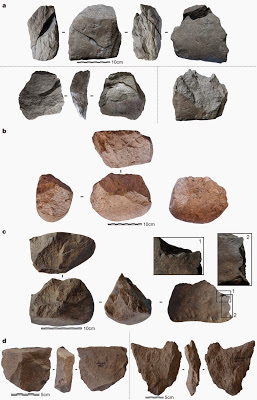 Up until last month, the oldest known hominid-manufactured stone tools dated to approximately 2.6 million years ago and came from a site at Gona, Ethiopia.  In April, Science Magazine reported on a conference paper announcing that tools dating to 3.3 million years ago had been discovered at a site near Lomekwi, Kenya. This is a VERY important discovery, pushing the date for earliest tools back 700,000 years. I held off posting on this as I was frustrated (as were other archaeologists I know) that there were no photographs of the artifacts provided. Earlier this week, the New York Times had an article on the subject that provided a link to the abstract of an article published in Nature by the discoverers. The photo of artifacts above was posted with the abstract along with some others, and my curiosity was somewhat satisfied.

This new discovery is similar to the one at Gona, in that the tools so far have not been discovered in direct association with any hominid remains.  It is assumed that they must have been made by contemporary known hominids, perhaps Australopithecus sp. or Kenyanthropus platyops. Unless and until we find a direction association of tools and bones we will not know who was responsible.

One of the more controversial aspects of the find has been the fact that the discoverers have asserted that these earlier stone tools should be referred to as a new Lomekwian lithic tradition. Up until this time, the earliest stone tool tradition (including the discoveries at Gona) were referred to as belonging to the Oldowan lithic tradition, based upon their first discovery by Louis and Mary Leakey in the 1930s at Olduvai (now Oldupai) Gorge in Tanzania. Discoverers subsequent to the Leakeys continued to use Oldowan as a descriptive term for a specific lithic “tool kit” even though their discoveries sometimes predated the ones at Olduvai (Oldupai). Looking at these tools, it doesn’t appear to me that they are really any different than those that have previously been classified as Oldowan. It doesn’t appear that the discoverers have advanced any real evidence that the Lomekwi tools are qualitatively or quantitatively different from Oldowan.

Usage by archaeologists over time will tell the tale, but somehow I doubt Lomekwian will catch on. I look forward to reading what other archaeologists have to say about this.

2 thoughts on “New Discovery Pushes Date of the Oldest Stone Tools Back 700,000 Years”