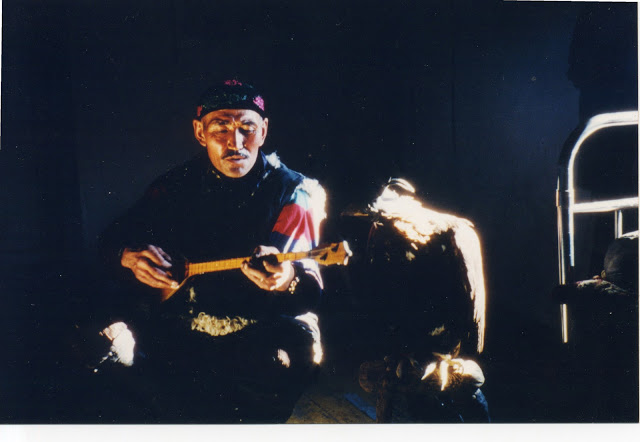 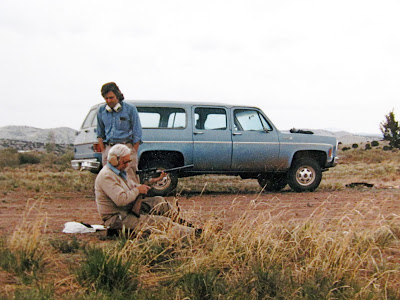 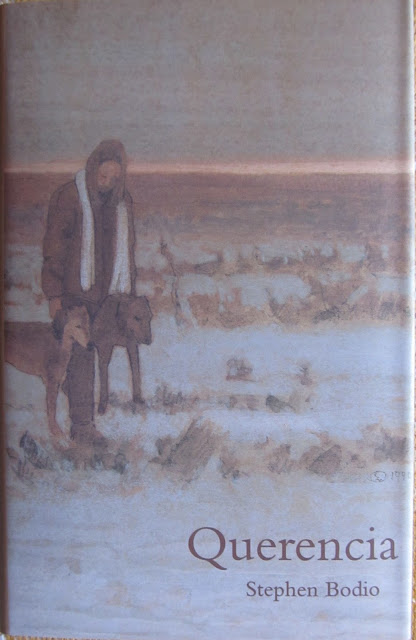 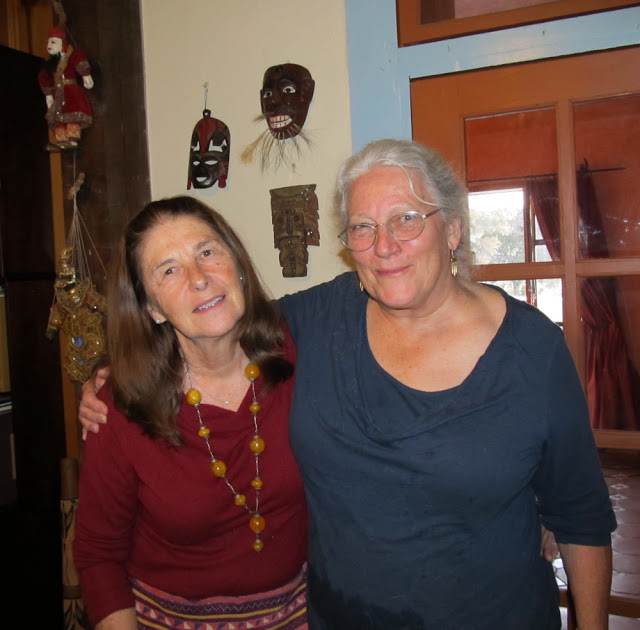 Two of the photos below were taken in Nepal after the quake– they were on the road to Pokhara when it hit, and I feared we had lost them…

“An unlikely combination of Yosemite Sam and the Maharishi, with a strong emphasis on Sam!” (Libby on Jean- Louis) 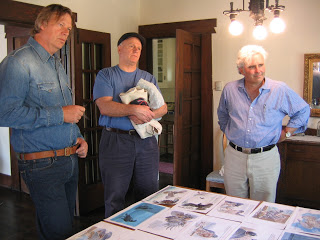 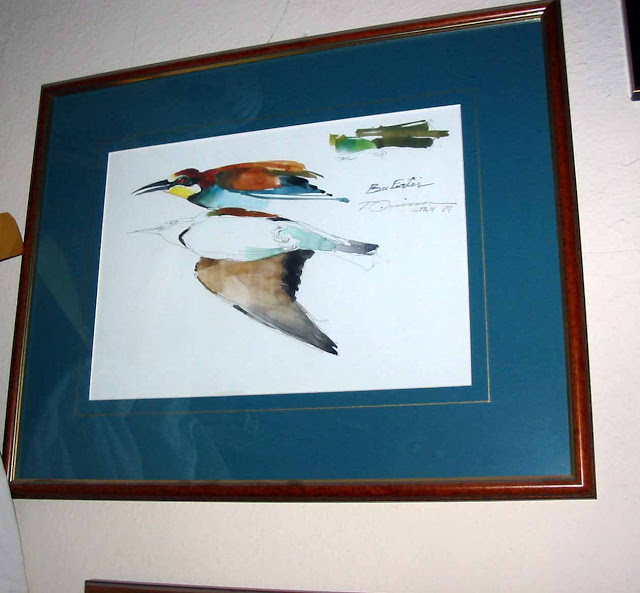 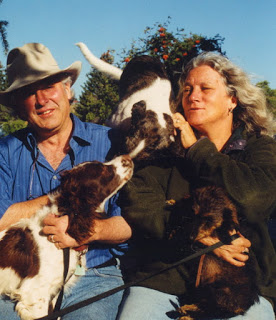 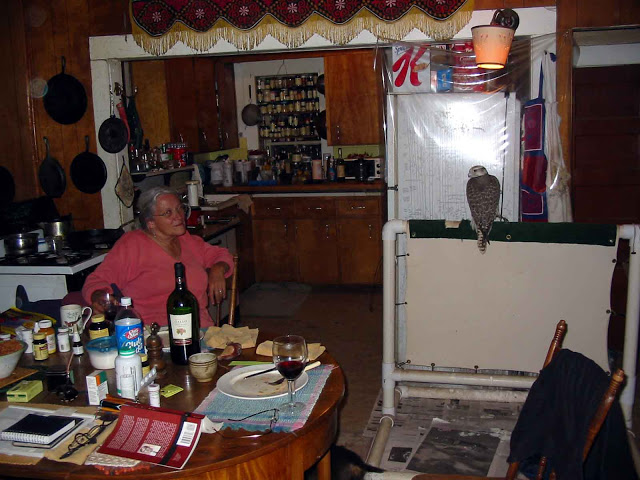 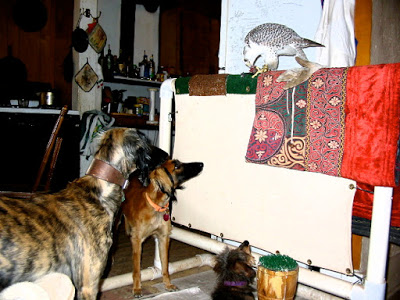 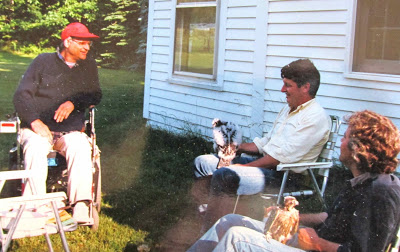 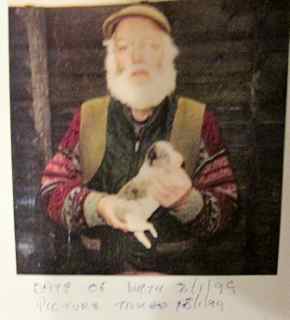 Not just the blog, but selected life. Enjoy,  enigmas,  in- jokes, and all… 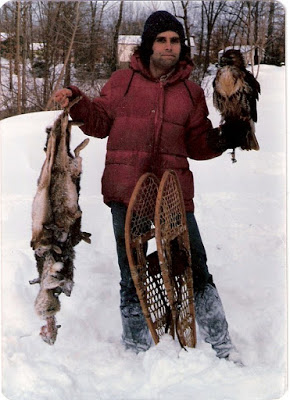 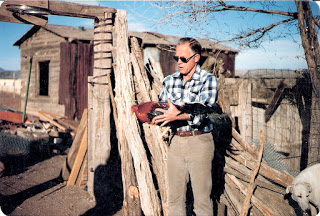 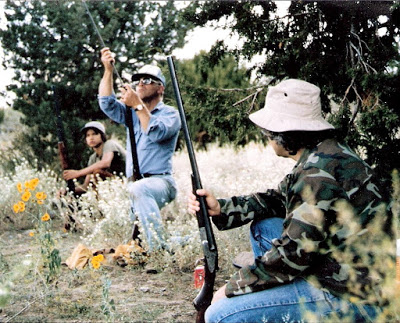 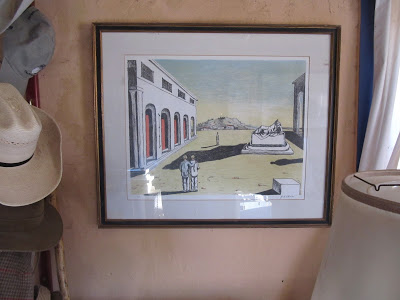 Dan Mannix was a popular magazine and book writer in the fifties who was a formative influence on many naturalists who grew up then. His most popular if not  necessarily best book was A Sporting Chance, which is in my “Book of Books”, about such things as falconry and ferrets and fishing with cormorants, all  of which he practiced, all which you could still do then without bureaucratic interference in those days. When I looked at what had written in my answer to Lane Batot below, I realized that with a few photos it would make an interesting post. Here it is!

Don’t forget The Killers (Coopers hawk and Gamecock) or The wolves of Paris or All Creatures Great and Small
(mine has a letter from his son after his death, saying that my books
were in his library and that he had spoken well of me, though I never
met him; he DID once shoot a blowgun dart into the mantel of a fireplace
next to where my Maine friend Mark Fanning was standing,and, when Mark
said “That wasn’t a poisoned one?” said “Don’t kid yourself, son.”
Then there are Step Right Up, about carney life, and Married to Adventure by Jule, with the cover of her mounted, with a hooded BALD eagle.

Betsy
and I chanced to meet a lovely old gal in Newton Mass while was
carrying a Merlin. She had that peculiar diction of the Philadelphia
upper class and was tall, with unfashionably long hair wound round her
head. She inspected the bird closely and announced; “I had a sorority
sister who kept birds like that, but rahther LARGER. I believe they were
EAGLES.” I sized up her accent and age, and asked “Was her married name
Jule Mannix?” She was amazed…

But the best story of all is
curiously unknown, and perhaps speaks to the divide between culture and
country, “literature” and all other writing, that exists in this nation,
and may be why I am a poor man. Acting on a lead in an article about
Saul Bellow in the NYRB, I tracked down the following amazing fact: in
1951, Bellow had to pay an unspecified “large” sum to Dan and Jule
Mannix, because he used, without attribution, over a hundred pages about
hunting iguanas in Mexico with eagles, which he took entirely from
Dan’s as yet unpublished ms, in his The Adventures of Augie March. Chapters 14 – 20 are FULL of Mannix! The only addition is the character of Augie, who is a well- written first- person narrator who like Bellow is an urban Jew, an ambitious son of son of  immigrants rather than a lucky Philadelphian who had the money to arrange his life to do what he wanted– check out the newlyweds’ first New York  address, when Dan was looking for, and had not yet found, writing work.

It is a pretty  good book, save for some rather dated “tough guy ” dialog that fades into the background after a while. The edition I have has a perceptive essay by the late Christopher
Hitchens, who says nothing about the eagles, though he knew more than he
is credited for about country life.

I am a  bit embarrassed that I had not read it already, but when I was young
there were a certain group of too- urban (or SUBurban– this last does not apply
to Bellow) middle- aged males that I couldn’t abide. Poor Updike of the
pissed- on lawn was chief among them, and I had just gotten to the point
of reading him when he did his Hamlet pastiche, and, rather than ask a
falconer about it, like Bellow had, or go out with the hawks, like
Hilary Mantel did (her opening scene in Bring Out Your Bodies is chilling and brilliant), he simply MADE IT UP, reinforcing my idea of him as second- class  once again.

(The only one of those upper- middle class WASPs and Jews I could abide was Cheever, whose dark  lyricism and sheer Yankee WEIRDNESS somehow got to  me-  after all, I knew many strange Yankees. And it took my own generation to produce an urban Jewish writer that I would follow anywhere, even when the experiment doesn’t quite come off; I have followed Jerome Charyn through his Marilyn the Wild
and its three successors, , through his Buffalo Bill novel (!- he is a New Yorker by birth and a Parisian by adoption) Darlin Bill, his graphic novels and historical books,  to Savage Shorthand,  his his commentary on Isaac Babel, and by God I will buy his new study of Emily Dickinson!* (The late Bad Bob  Jones, who insisted Updike wrote well, but only on sex– sorry Bob, in the  one scene I remember of two stoned teenagers in one of the “Rabbit” books, he was embarrassing) was more convincing when he said one night, when were drinking whiskey late at night at some Wildbranch workshop, that Red Cavalry and Dubliners  were the two best story collections in the world, and I only wanted to add some Kipling and couldn’t think of a SINGLE collection of that quality that he had made in his lifetime, and Bob said magnanimously why not Kim because it is the best spy novel ever told and I said but it’s not a short story OR a collection and we went on as we always did, back in those days when there was all the time in the world…

As you may have guessed, I have gone on at such ridiculous length because this is post # 3,999, and the blog party is not until early May, and I haven’t the slightest CLUE what to do with 4000. Suggestions listened to with interest but no guarantees. Perhaps the “Invisible Planets”: how much  unmentioned influence two dead guys named George had on my career…

* Do NOT, under any circumstance, recite Emily  Dickinson while listening to “The Yellow Rose of Texas”. You were warned…

* *Yeah, I grew up in the suburbs, from ages four to seventeen , but I wasn’t born there and I never did again. As George V Higgins,  one of the Georges referred to above and another master and inspiration said  (in The Patriot Game), just because I don’t like my suburban credentials doesn’t mean they are not genuine…

As Steve mentioned in an earlier post, Connie and I drove to Santa Fe on April 9 to attend (RockStar) Helen Macdonald’s book signing. We arrived mid-afternoon, checked into our hotel and went to the Plaza to kill some time before we went to pick up Steve and Libby and go see Helen.
We went into a gallery and I was completely floored to see three pieces by Maynard Dixon on the wall: a graphite sketch of a Navajo woman, a small pastel landscape and a pen and ink sketch of an Indian woman in a buckskin dress. Those of you who know me and who have read this blog know Dixon is one of my favorites and Steve and I agree that he is our favorite Western artist. I had never seen anything by Dixon for sale before and I suppose I had been so conditioned by seeing his paintings selling at the big auctions for six and seven figures I never thought it possible to own something by him.
They were all in our price range, but we liked the Navajo woman best and bought the sketch. All three pieces had been matted and framed the same by a company in Santa Monica and likely came from the liquation of a collection in the Los Angeles area. Unfortunately the gallery couldn’t tell us much about them. We will definitely get this re-matted and framed as the frame is worn, the matt is pretty ugly and done poorly – it cuts off part of the signature and almost cuts the woman’s head.
It’s 4-1/2 by 6 inches and is signed “M.D. Ganado ’09.”  It was likely done on one of the occasions when Dixon visited his good friend Lorenzo Hubbell at his trading post at Ganado, Arizona. The woman is wearing the traditional dress of long skirt and velvet blouse and has a striped blanket draped over her shoulders.

We were supposed to shear our sheep today, but a combination of rain and snow pushed back our shearing schedule and I had a free afternoon. I drove about 45 minutes south to meet up with an old friend who was making a quick stop on a Utah-to-Alaska roadtrip with her family. I was given directions to the house and a few minutes after introductions were made with an extensive family, I found myself sitting at a kitchen table with an old man who had spent a good portion of his life running hounds.

Hounds. On bears, lions, and coons.

“With coons, it’s all dog.” I immediately knew exactly what he meant, but I don’t know why it was such an instant connection.

The crowed room faded away as I listened to his stories: of the hound named Cougar, of black and tans, of Walkers brought out of the South. Of training young dogs with too much enthusiasm and without a lick of sense, of the scorn older dogs who had to run in the same pack, of using big Airedales and pitbulls to protect the hounds at the tree, of the good hound that would never backtrack a bear, of taking a Boone and Crockett black bear, of live capturing mountain lions and bringing them out on the back of a mule. I felt like Ben Lilly would have been at home with this man.

But here’s the thing: I’m not a houndsman, don’t own hounds, and have only had a few chances to accompany hounds on a hunt. I know that my uncle and other men I descend from were houndsmen, but it’s never been a part of my life. If I have any regrets in life, that would would be it.

But it doesn’t matter: There is something about hounds that speaks to the very core of my soul. It’s a deep and primal connection that I do not understand. If I step outside in the dark of the night and hear a hound baying in the distance, my heartbeat quickens, and sings.

Tell me, why? What is it about hounds that causes such a primitive reaction? Help me explore and understand.