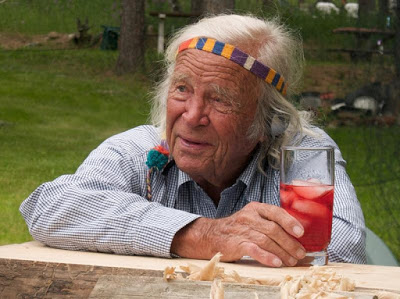 And he doesn’t look much older than he did when Libby and I attended his and his late twin  brother Frank’s 80th birthday party at Moose, Wyoming 20 years ago. (fuzzy photo from invitation) 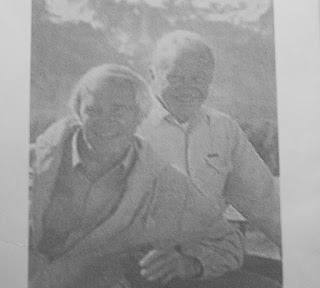 We actually had separate invitations- Libby had babysat the now middle- aged kids of both, and I had long ago written an intro for the Lyons reprint of their first book, Hawks in the Hand, which they wrote when they were not much older than in the Scout portrait below. 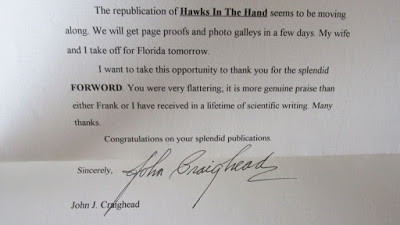 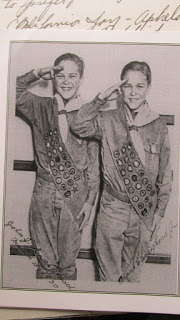 THAT book got them their invitation to a great adventure, by the Indian Prince R.S. Dharmakumarsihnji , to spend the winter learning the Indian, ie the surviving grand- scale Medieval, way of falconry.The trip produced the National Geographic article “Life with an Indian Prince” in 1942, and, 59 years later, the limited edition of the book of the same name, which is recommended in my “Book of Books”, Sportsmans Library. (A new one, not limited to books with hunting and fishing but including nature and wild travel, is in the works!)

They kept detailed notes. One of my prized possessions is a spiral- bound xerox copy of those notes, given to me by the “kids”. 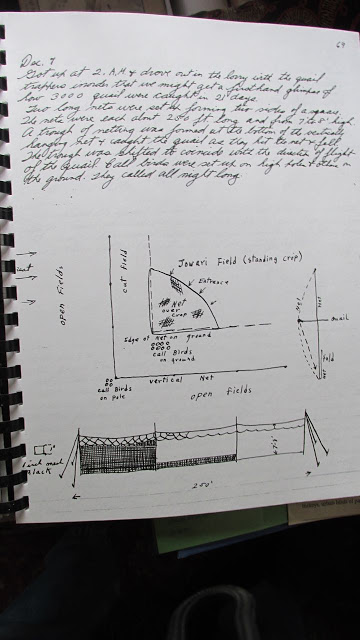 It also produced the best nature film you have never seen, the only film version of the field sports of the Raj ever produced, in color that looks modern even today. But  apparently flying Sakers at kites,  pretending to be a mendicant vegetarian Brahmin to trap crows, coursing blackbuck with cheetahs (they rode hooded like falcons in bullock carts, and were fed the blood of the quarry in long-handled ladles), and shooting a Gir forest lion as a wedding present,  were too un- pc for Nat Geo even in the immediate postwar years.

They were to go on to fame and even noteriety as wildlife biologists, particularly when they told the truth about the garbage eating bears in Yellowstone. Their work is carried on by their children and the Craighead Wildlife- Wildlands Institute. When I met Frank at 80 I told him he had been a great influence on my life. He said wryly “I hope I didn’t ruin it entirely!” On the contrary, both brothers enhanced my life enormously. 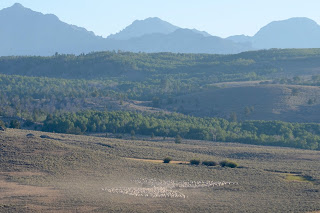 A range flock of domestic sheep exits the mountains in the southern Wind River Range of western Wyoming. Before the flock begins its slow movement to lower elevations, herders needed a head count. But how do you count thousands of sheep with only two men? It’s fairly simple.

Range sheep have strong flocking instincts, and if you can get the lead sheep to go in the desired direction, the rest of the flock will follow. The herders (on horseback) approached the head of the flock as it traveled downhill, forcing the sheep through a bottleneck formed by their horses. The men count the sheep as they pass through the bottleneck. (Click on the photos for an enlarged view.) 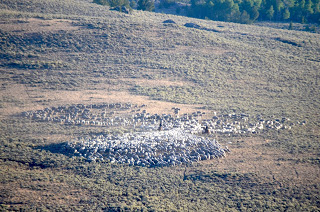 Even though the sheep could easily go around the riders, they don’t, instead following their flockmates down the determined path. This flock of yearling ewes is used to the counting technique and know the drill. 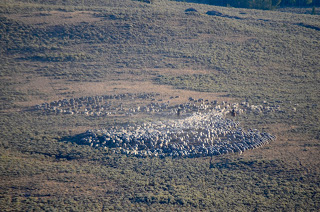 Notice how the sheep in the top left of the photo don’t cut down the hill to join their flockmates but turn to move through the bottleneck as the herder to the left steps back, providing a wider path. 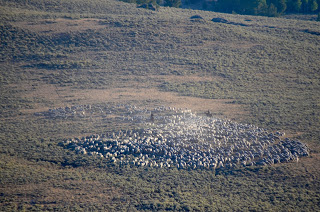 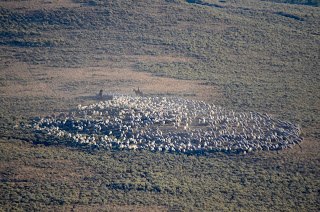 The tail end of the flock easily moves through the bottleneck created by the herders. This is low-stress livestock handling.

We know well that having a  puppy and a new bird may be FUN, but not easy. For Phil and Kerri (and Lane): 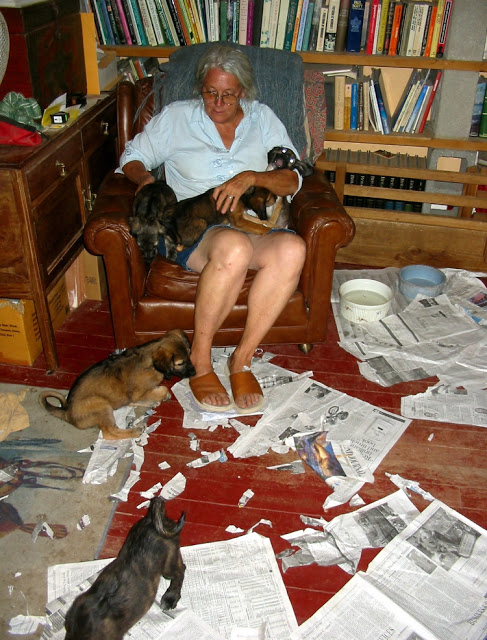 “I have been in many countries and there is not a Kangal anywhere. That is why the world will be at war soon. If everyone had my father’s dogs, things would already be settled. In my home . . . the wolves will come for something that is not theirs. The Kangal finishes it all and sends them away. We are herders, and we like it. The Kangal keeps us safe in our land. We cut off his ears when he is little, so the wolf cannot bite. The wolf is always killed by the time we get to the dogs. My sister, she has two sons now. The wolves came for her and were destroyed . . . now she has two sons… Sir, the Kangal is good for the world. Not just families. They are the color of sand and rock, they have the heart of those before them, the wild animals that have become our friends. It is that way with our dogs. Every- one should have a Kangal.”

You can help support me by using one of our affiliate links below! By using the like to purchase one of my books or a book that I recommend, I will receive a small percentage of the purchase price.

Margory Cohen sent this, by the late, great, and much- missed Vicki Hearne:

Now it is time for her name –

Start the call.  The time may come
For her job, which is to run
Holes in the palpable wind

Hallowed by world and the world
Will collapse, follow this hound
Through meteoric  valleys.

Wolf-shag domains.  Here God says
Himself through the wolf until
A slenderness of hound bitch

With a speed like silk shimmers
At God, all arc and angle,
Revelations for voice.  So

It was in the beginning
And evermore shall be, so
Her arcs speak back to the light

Which is become an affair
Of luminous shadows, so
It was in the beginning

And evermore shall be in
Her temporal impudence,
Intended as litany. 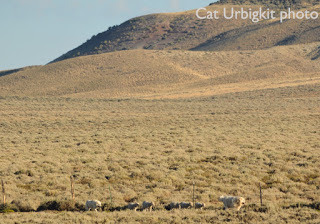 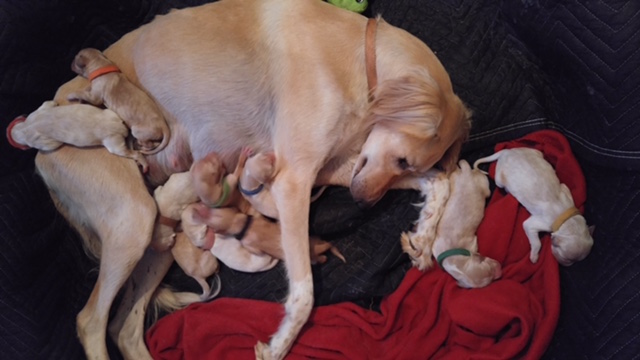 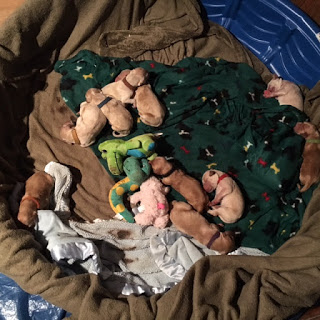 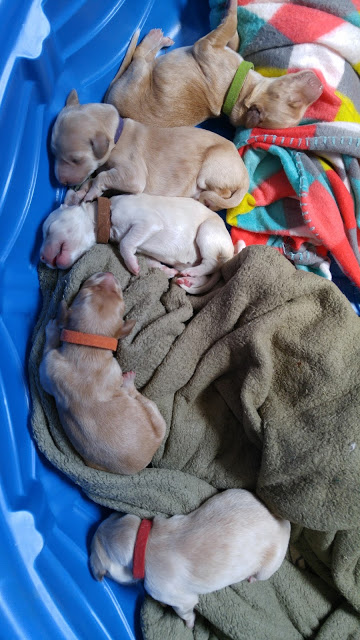 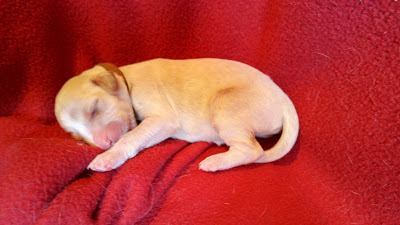 0ur pick is the small brown- collared girl, who has a white blaze and the prospect of a dark muzzle and ears. She might resemble the late lamented Pax. They, and Ataika, are all closely related. Our current thought on a name is Alema, Kazakh for Milky Way, after Lauren’s Kazakh eagle. 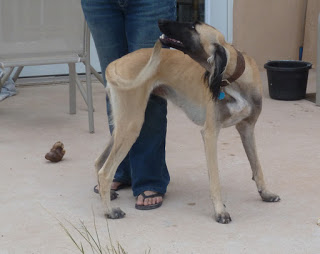