As some of you know, I virtually cannot type anymore. But I have many books to write yet (Yojimbo: “I can’t die yet– I have too many people left to kill!”) and Libby can’t  easily take dictation, partly  because she can’t hear my hoarse Parkinson’s voice, and partially because by evening she is exhausted and drained by an ever more irrational  Post Office.

About two weeks ago my veterinarian of 35 years, Terry Gonzales, who even when she was out of work (even when she was recovering from cancer!) always made house visits so that my dogs might die at peace in their own beds, called me and insisted that her sister had to be typing for me. I still do not know how this miracle came about — she hadn’t seen me for months, even heard I needed a typist, and Pat certainly isn’t a “typist,”- she is a literate scholar with degrees in literature and history, and I expect rather comfortably off. I think she was bored!

After ten minutes with me she had quoted Kipling, Wilde, and Dorothy Parker. I left Terri to talk
dogs with Libby,  and took Pat into the library and quizzed her. I sent her home with a stack of books, mine and others, and said that if she felt up for working for me after reading those we could talk. We’ve been talking ever since.

We have now officially begun my second book of books, which you will hear much more about. Soon to come in the blog is a detailed outline,  for this is a “new thing under the sun”, to be partially crowdfunded by my friend and agent Daniel’s wife’s publishing company. It should make me considerably more money and less heartburn than Hounds did. It will also be far more unusual than the first one, a huge compendium of books I love and why. The short title is “With Trees”, and I bet a lot of you will know exactly what that means.

I accused Pat of being a “woman of mystery” after I had known her a few days. She protested that she was not mysterious at all, and then told me that though she had grown up in the South, she was born in Japan and Japanese was her first language, and though not Catholic, she had gone to Catholic schools until her parents feared she was becoming a “Papist”. She showed total familiarity with cowboy lore.  She then added the following:

“I’ve had my fun, but nothing, dear folks, like the adventures you have lived. I am a widow; my husband of 20 years died in late 2013. He was a star: brilliant, multitalented, highly skilled and uniquely funny  (and a beautiful ballroom dancer). Different occupations (legal secretary, autopsy assistant [!!– SB], administrator, parapsych researcher, political organizer) have filled my years…”

Woman of mystery, I say. At any rate, if this works out, and I think it will, she will have more responsibility in the fiction and memoir areas in the  NEXT two books, and a full research partnership and cover credit if we ever do the Passenger pigeon book. Here she is; working: 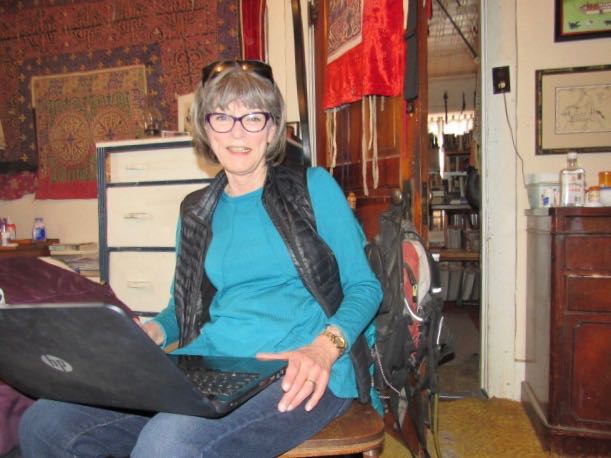 And in a hilarious poster with her late husband 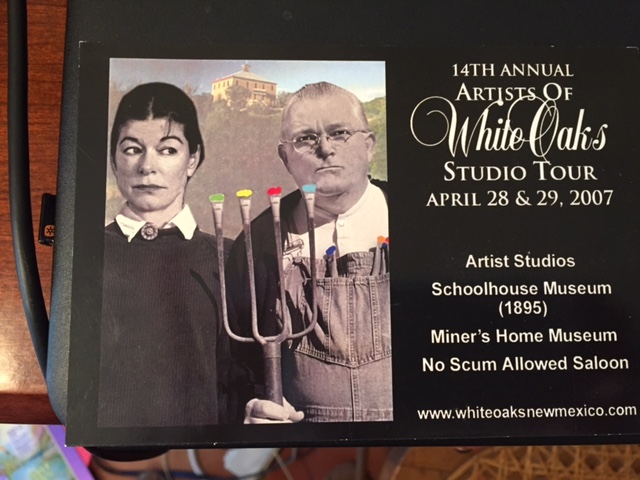 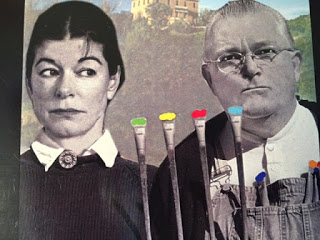 Lane Kleppen, who grew up on Montana’s bleak and beautiful Hi- line, (his older stay- at- home brother  Trent sends us wonderful photos from there, another friend who was born at Fort Peck has written the definitive book on it, Corb Lund the definitive song (scroll down), and still another friend, John Carlson of Prairie Ice, who was also born there, was my best man when Lib and I were married), but now lives in Seattle, visited this weekend in a vintage VW bug he had just bought in Albuquerque, which had fewer than 10,000 original miles on it! He also shot he shortest video of the 2000 foot climb out of the valley  to Magdalena I have ever seen. We had fun. I don’t think I ever met anyone from there I didn’t like… 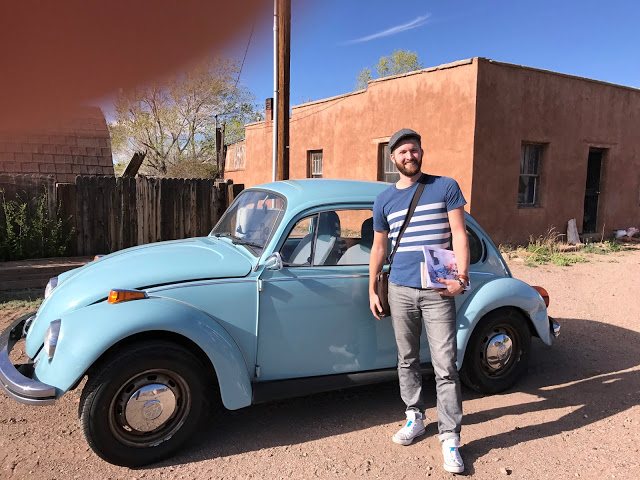 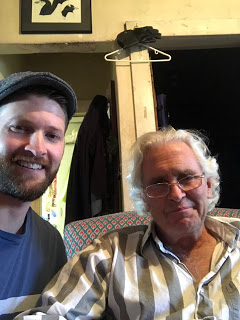 Penguin John in his colony …. 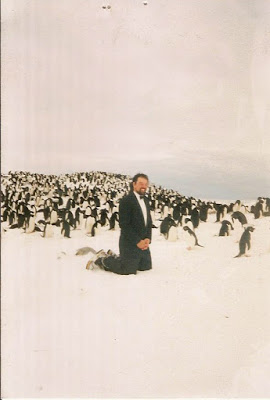 … with Annyushka, the Merlin Huntress. 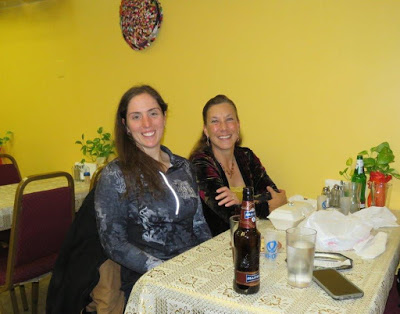 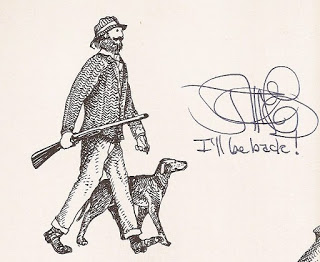 John McLoughlin, the sage and hermit of Talpa and the least known paleoartist who helped discover the birdlike nature of Dinos, sent me the following:

“Wild radioactive boars contaminated by the meltdown of the Fukushima nuclear plant six years ago are now roaming northern Japan by the hundreds, rampaging through crops and occasionally attacking humans. If you are planning a trip to Japan soon, do not eat wild boar.”
[The New York Times/Kimiko de Freytas-Tamura]

Perhaps only John (self-portrait above) would preface this with “I mean, is this a great planet or what?

Anne Price of the REF</> has just sent a link to an enormous bunch of recent work by Vadim Gorbatov</>. Seems like he is doing a lot of urban wildlife lately… (and no, I don’t know why that extra code shows) 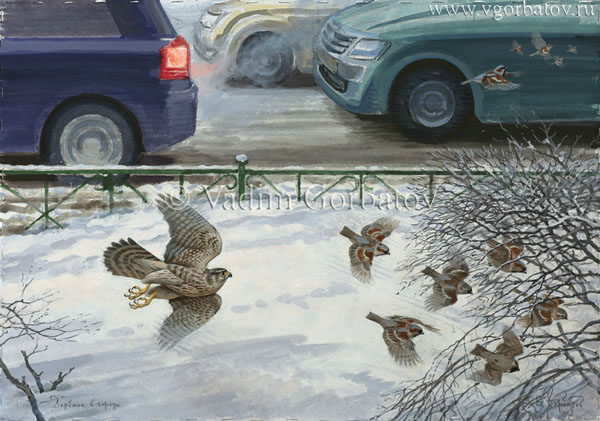 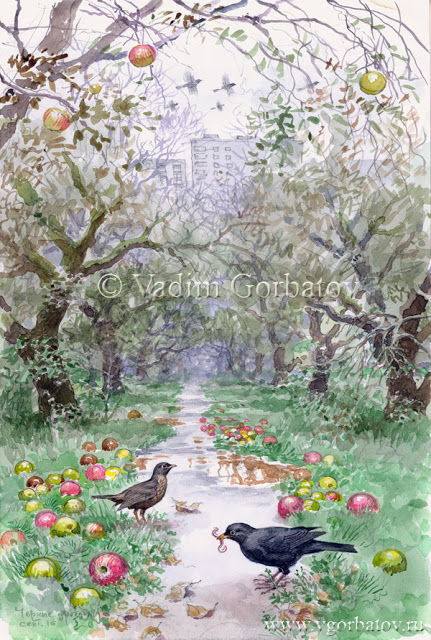 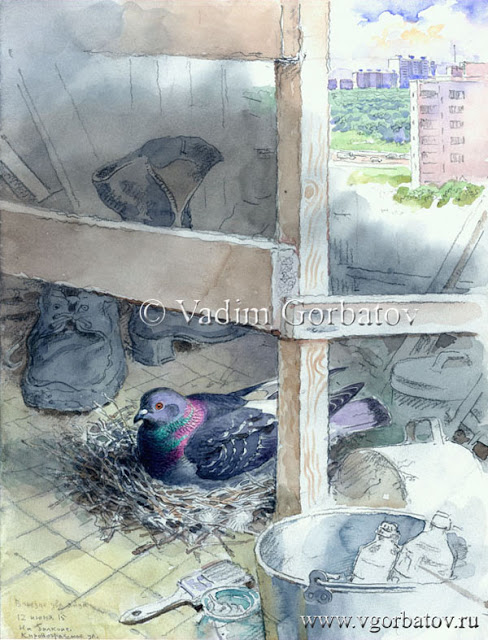 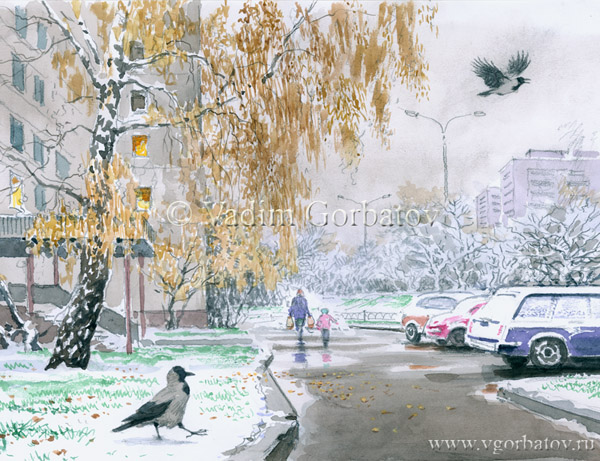 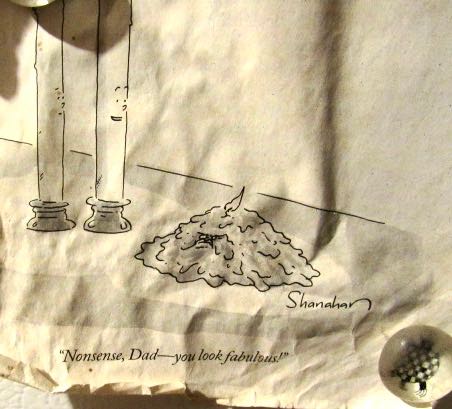 A peceptive Jenny French noticed that Stefan’s pic of me and the girls ersembled Clement Freud’s late dog and person pics.She was right: 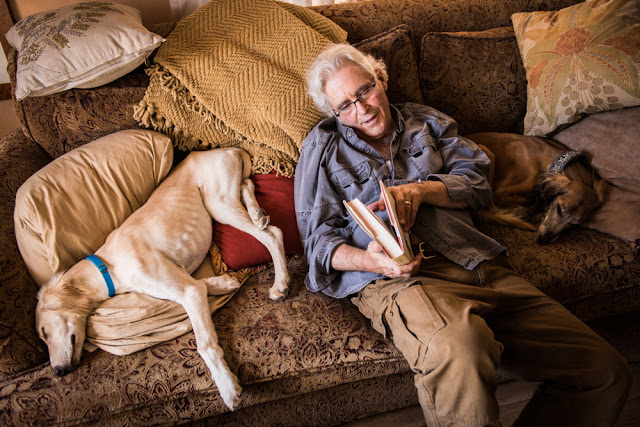 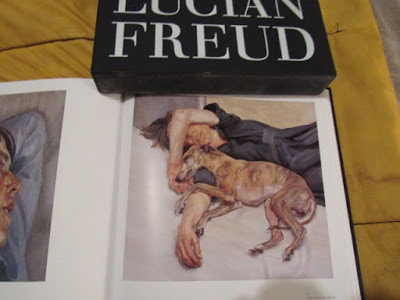 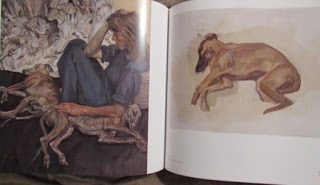 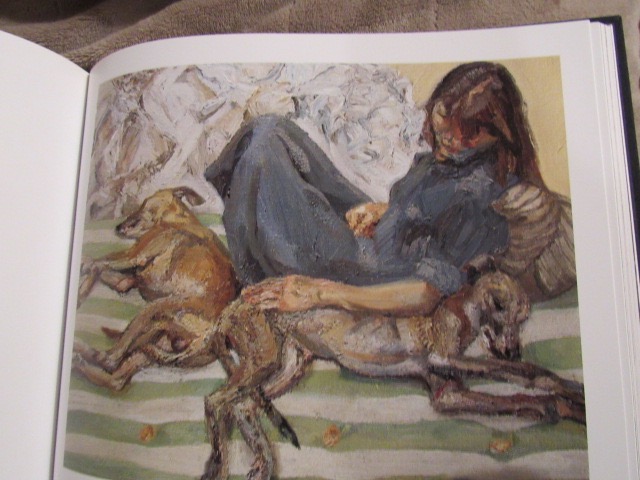 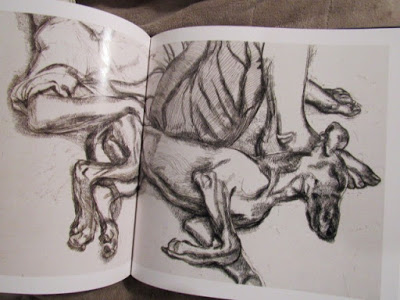 Taik liked the clinic trip better than we did.. 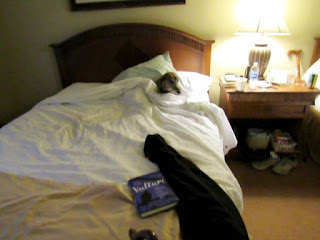 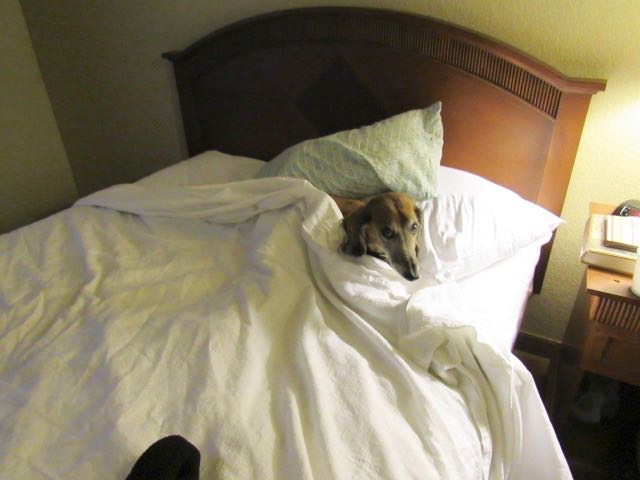