This will be one illo by Eldridge Hardie from a new collection of the works of North Dakota poet and hunter Tim Murphy. He and El gave it to me! I have been a fan of Eldridge’s work for at least as long as the old Gray’s that we both worked at existed. I brought a copy of the late Datus Proper’s Pheasants of the Mind, among my favorites of both their works, and was pleased to hear, in our too- short Denver visit, that he had also hunted with Datus. They met in Arizona for quail; Datus and I used to out of Bozeman for quick day trips after Gray partridge…

The terrible thing about Parkinson’s is that it is a one-way ratchet. From the moment the first symptoms start, its advance is slow and relentless, from when you just have a little tremor or lurch and are just about normal. “Progress” has begun. When the slide starts the slope more steeply, you can no longer lie to yourself. The results may keep you up more even than the constant pain and cramps in your leg muscles. You think of old Pope John Paul, the Olympic- class skier of the Tatra Mountains turned into (I KNOW) an amazingly determined old wreck of a hero. You think of two friends of Tim Murphy’s who committed suicide because of their inability to accomplish the smallest task. That water slide on your personal fun ride has something like “All hope abandoned” engraved above the door downstream. I don’t walk well and can barely sleep, my typing is beyond atrocious, and I am in constant pain. Having fun is almost as difficult as working. Sometimes I can’t even read a book. I met one of my sporting heroes,the artist Eldridge Hardie, in Denver last week and couldn’t even stay a half an hour, becaise it was so uncomfortable to sit.

Meanwhile, someone– Walter H?– sent me link to a BBC story titled “First Hints Parkinson’s Can Be Stopped”. “Bayetta” is a synthetic analog of a Gila monster venom that seems to stop Parkinson’s in its tracks. It didn’t seem to reverse the effects. What you have was where you started. But I figure that any time you get off the slide is better than any time later. I do various things — lifting weights (not too much since the guy moved away and the machines left), yoga, and hitting the big bag. I can use these to get myself back in shape if my nerves stop rotting out.

It is a total of three courses, each a month long, using two injections a day. After that, you’re done. So far, experimental subjects have maintained without further treatments.

I’ve been thinking about it while sitting sleepless in my chairs with my thigh muscles spasming. It is an “off- license” drug for PD in the USA, used for type 2 diabetes. A rather Soviet female doctor at the Anschutz clinic in Colorado would not prescribe it; “It’s against the rules! It is for your safety!”

Well, maybe. It has a lot fewer side effects than her favorite, Azilect, an MAO antagonist. I told her I was going to seek a source and she gave me a look of irritation along with (I hope) grudging respect for my stubbornness.

My friend Kirk Hogan at the University of Wisconsin, Madison, physician(anesthesiolologist), scientist (geneticist, anthropologist), gourmand, salmon fisher in Iceland woodcock hunter in Brittany, who met me while he was elk hunting on a friend’s ranch in Catron County, and who studied Colonial literature, our heroes Kipling and Conrad, under Bill Burroughs at the Naropa Institute, came through with information and support. Beth K., a former internist and at one time our brilliant local doctor, who is now living in Austin and says she’d rather run a wildlife refuge than be in medicine, seconded the info, Then our primary care physician, Jenn Phillips, evaluated the information and decided to write us a prescription. My “medical board” is an impressive bunch.

I’m sitting around waiting to get my first shot, because I can’t eat until 30 minutes afterwards. I’m supposed to quit or at least cut back my drinking for a couple of months. I can’t do it cold turkey, because it would probably kill me, but I am resigned to doing it slowly, at least for the three months. That I can’t do it cold turkey is probably reason enough to cut back. a new drug, Extended release Amantadine, is just on general approval to use for suppressing the dyskenesias, the rhythmic movements that I tend to take when my medicine is doing well, and cause Montana, the bartender at the Spur, to say “Turn on the jukebox, so tourists will think Steve is dancin’, and he won’t scare them”, and also the terrible crashes, which within a minute’s time turn my body from an obedient servant to a hulk that cannot sit comfortably in a chair, never mind walk or write. These are the things that hurt and frustrate me most.

Science has now developed drugs to stop Parkinson’s in its tracks and alleviate its worst symptoms. As you get old, your are more and more grateful for negative freedoms. I’m a happy man tonight.

My friend Monty was always a slightly elusive presence, even in his autobiographical sketch in Amazon, written by himself:

“M. R. Montgomery, known to the various government record keepers as Maurice R. Montgomery Jr., and to all his acquaintances as Monty, was born in eastern Montana in 1938, raised partly in California, and now lives near Boston for reasons that he cannot quite explain. Over the past twenty-five years he has written for the Boston Globe on every subject except politics, a clean record he hopes to maintain until retirement. Other than fishing and a little bit of gunning, he has no obsessive hobbies, although he has been known to plant the occasional tomato and a manageable number of antique rose varieties, these for the pleasure of his wife, Florence.”

Monty could write about anything. Though I didn’t get to know him until the 90s, I first wrote to him for advice on bird dogs in 1970s — he replied with a column called “Find a Gentleman With a Bird Dog”. He also wrote columns I remember on rutabagas and November.

In the end I couldn’t even find his obit in the Globe. Monty was erudite, kind, and generous as well as an undervalued writer. He will be missed.

Here is a fine tribute by Corb Lund about their mutual country.

When you finally find the one

If this confuses you, see this: 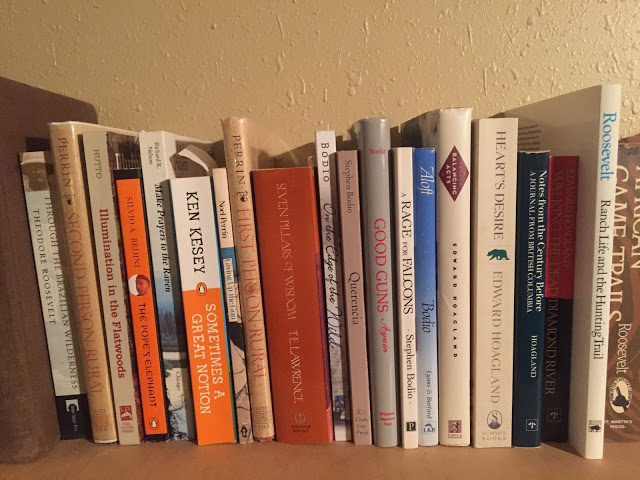