Why I need th is brønze baby falcon by Peregrine O’Gormley at the Peters: 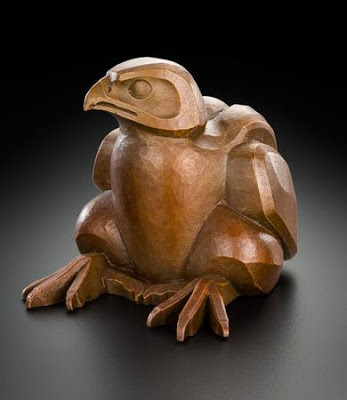 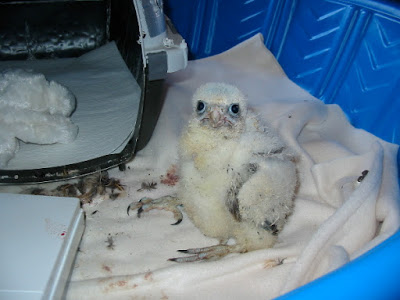 {Intro from Cat: Last week, a wolf tried to get into a flock of yearling sheep on the mountain, and ended up in a brawl with six guardian dogs. Although the wolf was injured, it escaped without succeeding in killing any sheep. If it lives, I’m hoping it learned a valuable lesson. A couple of the dogs were injured but are fine.
Another flock moved several miles downriver from our house, getting out onto the desert and further away from the Wind River Mountains here in western Wyoming. This is the flock we’ve had here all summer, with no depredation even though the wolves kept checking in on them and testing the dogs. We assumed things would be safer for that flock, but apparently at least one wolf decided to follow their movement downriver.

Bear-Bear, the biggest and toughest livestock guardian dog I’ve ever known (a Central Asian Ovcharka/Akbash cross), was badly injured. Since then, I’ve been getting lots of comments that we need to put spiked collars on our dogs. It’s an easy suggestion, but a lot harder to implement on a naïve dog population that most people realize. If you’ve got a stable dog pack on a set acreage it’s easier, but when you are managing a dog population involving four groups of dogs in a fluid system across large expanses of landscape, it’s much more complicated.}

A spiked collar is a tool, an added defense for a livestock guardian dog. But just like any tool, there are appropriate times and places for their use, and some dogs are more suited to using them than others. Placing spiked collars in a dog pack is something that has to be closely supervised.

We have spiked collars, and have used them in the past with a group of mature dogs with one dominant male leading the bunch (Rant). But we are not currently using spiked collars, for numerous reasons. There are four groups of dogs out with different sheep flocks, and the members of each group change on a fairly regular basis at this time of year (for a variety of reasons) when the sheep are on the move. That means that pack dynamics change as well.

In addition, since we’ve brought in our first outside dogs in about 10 years, we’ve bumped up pup production to get these dogs into the working gene pool. So we’ve got all age groups present, from pups just a few months old that are interacting with yearling dogs, dogs with a few years experience, dogs in their prime, and older dogs.

Adding sharp objects to dog collars in this scenario would lay the groundwork for a disaster. Dogs may get their teeth knocked out from inter-pack brawls involving spiked collars. Dogs are smart and know to use the spikes as a weapon. That is great when dealing with wolves, not so great when you’re hormonal and mad at another dog for stealing a bone or growling at your offspring.

In their countries of origin, there are some areas where the collars are often used; in other areas, not so much; and in some areas, not at all. Even where they are used, rarely are all members of a pack collared – only those lead or more aggressive dogs most likely to be first on the scene to challenge a wolf wear spiked collars. In some areas we visited in Turkey, the dogs only wear the collars in certain grazing areas, and by law the collars must be removed before the flocks return to the village.

Juvenile dogs that are still growing and wrestling and figuring out their place in the pack generally shouldn’t wear spiked collars, and we don’t have any collars that small anyway (as in nothing that would fit Boo, who survived a wolf attack in May).

Last week, four dogs from the river flock went on a walkabout and visited a neighboring ranch that does not use dogs of any kind. The presence of four large dogs was startling enough, but we’ve got dogs from Tajikistan with cropped ears – and for some reason, that seems to scare the hell out of people. Fortunately, these kind people got word to us so we could quickly rid them of their unwelcome visitors.

Perhaps when we’ve got a more consistent dog population (which is during the winter when we’ll be feeding hay to the sheep and the flocks are further apart) we can put collars on some of our dominant dogs. We would have more time to supervise the process at that point. But until then, it’s not a good option.

Two days ago, Lauren defended her thesis and is now DOCTOR Lauren McGough.

Here she is on her first trip, st seventen (sixteen?) with the late Aralbai… 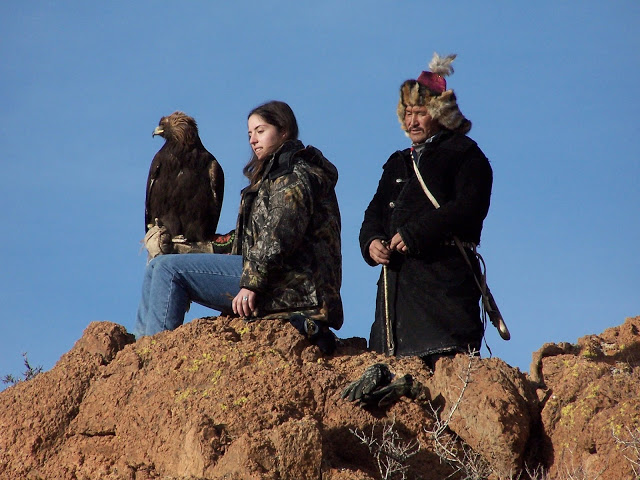 All our love and congratulations!

Contrary to rumors, I’m doing pretty well. I’ve had some trouble with the drugs but I’m still advancing to a second operation.

Meanwhile, I have three books ready to go in quick succession. The first is my “legendary”– I know, I know, but it has been nearly finished and read by friends in “Samizdat” for years- novel Tiger Country;.

The second is a much expanded “Book of Books”, called With Trees; can you guess its name’s origin?

And the novel? Here’s what Malcolm Brooks says about it: “Steve Bodio brings his legendary Renaissance vision to this startling first novel, a work so mammoth in scope and elegant in execution it makes me wish he’d been writing fiction all along. Recalling the edgy best of Ed Abbey and Jim Harrison, and reminiscent of James Carlos Blake’s contemporary border noir, Tiger Country throws modern heroic renegades into the gravitational pull of the ancient past, to encounter the origins of the human condition. Though it makes admirable use of the techniques of the modern thriller, this book nonetheless has its roots in the classical literary tradition, populated by fascinating, unpredictable characters asking dangerous questions about the world we inhabit. Gripping, and utterly one-of-a-kind.”

Plus the cover photograph by Jackson Frishman of Ladron Peak, the legendary Theives’ Mountain that also dominates the opening scenes of Edward Abbey’s novel The Brave Cowboy, the first great modern “western”

“The most appealing daily schedule I know is that of a turn-of-the-century Danish aristocrat. He got up at four and set out on foot to hunt black grouse, woodcock, and snipe. At eleven he met his friends, who had also been out hunting alone all morning. They converged ‘at one of these babbling brooks,’ he wrote. He outlined the rest of his schedule. ‘Take a quick dip, relax with a schnapps and a sandwich, stretch out, have a smoke, take a nap or just rest, and then just sit around and chat until three. Then I hunt some more until sundown, bathe again, put on white tie and tails just to keep up appearances, eat a huge dinner, smoke a cigar and sleep like a log until the sun comes up again to redden the eastern sky. This is living…. Could it be more perfect?’” — Annie Dillard
(Thanks to Tim G. The unnamed aristo was Karen Blixen’s father))

!! Have been busy, broke, aNd sufferjng everything from wrong meds to (found, never fear; guess WHO? )lost dogs, to Libby’s becoming, I hope extremely temporarily , a non walking casualty; finally, idiotically, attempting TWO hawks. Nobody could say my life has been boring…

More regular blogging will resume soon. Meanwhile a few images and such… 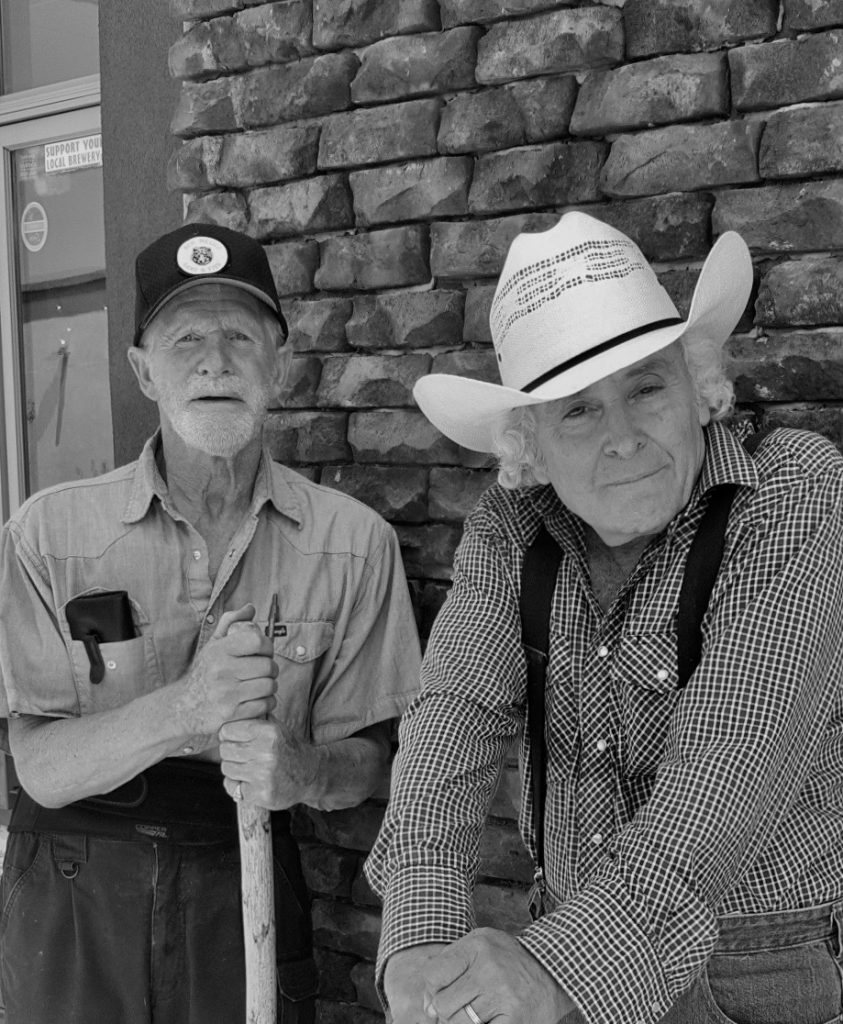 Hauksbee getting a wet- down on a hot day

Outside with the irrepressible Bo.