Walter Becker slipped away last year, causing barely a ripple in the media. He was half of the writing team of Steely Dan, along with the more forward Donald Fagen, since their days together at Bard College. Their music defined my 1970s,along with that of many of us who were more cerebral than, say, Eagles fans. It is said that they wrote the charts for every so-called solo that their “band” (which also needs to be put in quotes because they never were a band) played. This drove some of the better musicians associated with them, like Jeff “Skunk” Baxter, nuts, but he returned again and again. It was perhaps typical of the hipness and oddness of the Dan of steel that Baxter became a national security expert after 9-11, and was responsible for catching many terrorists, though he still looks like a California hippie and still plays occasionally with the big band, the current incarnation of Steely Dan.

Since Bard days, Steely Dan was really only two people, Donald Fagen and Walter Becker, with the entire American jazz and pop songbook in their heads (listen to their arrangement of Duke Ellington’s “East St Louis Toodle-Doo”), and what some say was darkness in their hearts. Jay of Jay and The Americans, who used them as a backup band in days gone by, called them Manson and Starkweather. A critic at, I believe, Time, called them The Grateful Dead of Bad Vibes, showing an almost willful contempt for and ignorance about both the Dead and the Dan. But despite the fact that they were named after a dildo in a William S Burroughs novel and occasionally wrote about mass murderers and cheating gamblers, the most typical Dan hero was a failed romantic, a loser of some essential thing, a melancholic and a stoic, living as best he could. From the Midnight Cruiser on the first album (“I am another gentleman loser…”) through the fellow who until his ship comes in lives “Night by Night” to Deacon Blues, to besotted lovers pursuing pornstars, old men in love with unsuitably young women, the entire populace of Puerto Rico (The Royal Scam) and the fool begging Rikki not to lose his number in what must the beautiful song about a deluded lover ever written, all of Becker and Fagen’s heroes come at last to a worn door in an Asian (or universal? after all, “Klaus and the Rooster”, who sound like Euro- trash mercenaries, are also patrons) bar and whorehouse where they “knock twice, rap with their canes” to find a kind of false peace and security that may be the only kind that exists, here at the Western World.

Such realism is not usually the province of rock bands, nor such musicianship; nor, for that matter, so much submersion of the ego to the music. Walter Becker, the more self- effacing of the pair, died in Maui months ago, and I didn’t even find out until last week. That I am still playing their songbook almost weekly, when they closed entirely in 1980 but for rare big band tours doing “archival” material, is a tribute to the quality of the music they made.

I am proud to be published by Karen Myers‘ Perkunas Press, and even prouder to be the first writer in her Behind The Ranges imprint. Karen chose her title well. Kipling was my first and is finally my favorite writer; as he wrote about “Janeites”, obsessive fans of Jane Austen, so I am “Rudyardite”, with a love for strange trails. I have asked Libby to have the following lines, from “The Song of the Dead“, chiseled on my grave:

We were dreamers, dreaming greatly, in the man-stifled town;
We yearned beyond the sky-line where the strange roads go down…

But the imprint is from another poem, The Explorer:

“There’s no sense in going further— it’s the edge of cultivation,”
So they said, and I believed it—broke my land and sowed my crop—
Built my barns and strung my fences in the little border station
Tucked away below the foothills where the trails run out and stop.

Till a voice, as bad as Conscience, rang interminable changes 5
On one everlasting Whisper day and night repeated—so:
“Something hidden. Go and find it. Go and look behind the Ranges—
“Something lost behind the Ranges. Lost and waiting for you. Go!”

So I went, worn out of patience; never told my nearest neighbours—
Stole away with pack and ponies—left ’em drinking in the town; 10
And the faith that moveth mountains didn’t seem to help my labours
As I faced the sheer main-ranges, whipping up and leading down.

March by march I puzzled through ’em, turning flanks and dodging shoulders,
Hurried on in hope of water, headed back for lack of grass;
Till I camped above the tree-line—drifted snow and naked boulders— 15
Felt free air astir to windward—knew I’d stumbled on the Pass.

’Thought to name it for the finder: but that night the Norther found me—
Froze and killed the plains-bred ponies; so I called the camp Despair
(It’s the Railway Gap to-day, though). Then my Whisper waked to hound me:—
“Something lost behind the Ranges. Over yonder! Go you there!”

He looks pretty relaxed these days. Now to find him some quarry…. 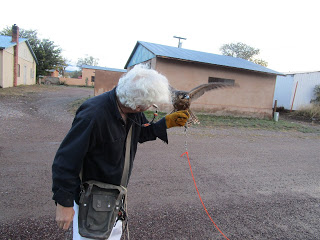 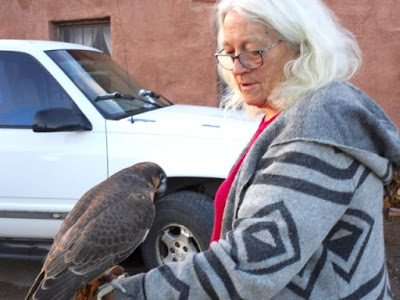 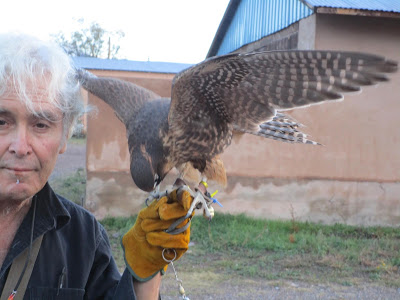 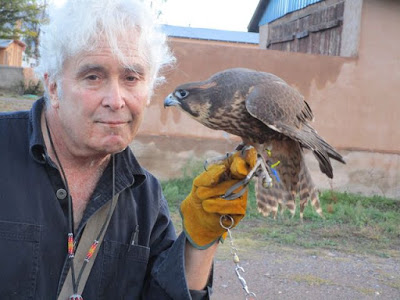 The next is from another life, forty- some years ago, when I lived in the January Hills, ate roadkill, and edited a journal of Renaissance studies. That’s Cinammon, one of the two best hawks I have ever had, stolen from me not once but twice. 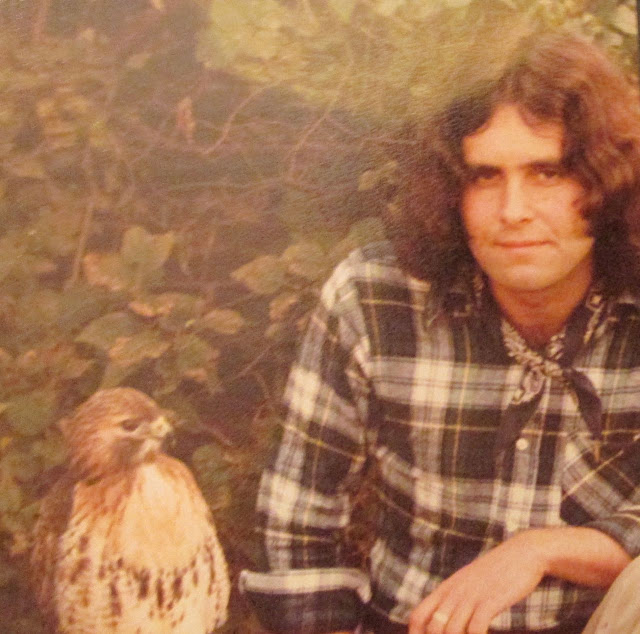 Tiger Country is available from the publisher, in various formats… and from Amazon here.

Some good people have said nice things about it. Malcolm Brooks, the hyper- literate author of Painted Horses, says: “Steve Bodio brings his legendary Renaissance vision to this startling first novel, a work so mammoth in scope and elegant in execution it makes me wish he’d been writing fiction all along. Recalling the edgy best of Ed Abbey and Jim Harrison, and reminiscent of James Carlos Blake’s contemporary border noir, Tiger Country throws modern heroic renegades into the gravitational pull of the ancient past, to encounter the origins of the human condition. Though it makes admirable use of the techniques of the modern thriller, this book nonetheless has its roots in the classical literary tradition, populated by fascinating, unpredictable characters asking dangerous questions about the world we inhabit. Gripping, and utterly one-of-a-kind.”

John Barsness, native Montanan and poet turned firearms maven and proprietor of The Rifle Looney News, says: “Steve Bodio chose New Mexico as the surrounding essence of his life decades ago–or perhaps New Mexico chose him. Tiger Country is a well-told tale of the many human conflicts of the New West, both philosophical and physical, by one of the best “nature” writers of his generation, because he knows humans are part of the natural world, whether for good or evil.

Cat Urbigkit, public- land pastoralist and expert on the brave dogs who sometimes give up their lives for their herds, whose next book is on (NOT against!)the grizzly in the greater Yellowstone region, says: “No one better articulates the natural history of the desert southwest’s wildlands than Steve Bodio. His first novel incorporates vivid and raw human and animal characters, while skillfully blending mixes of culture, blood sport, and landscape.”

Tom McIntyre is either the most literate of hunting writers or the most serious hunter among literary writers. He went to Reed College and since then has mostly hunted and written hundreds of articles and more books than I can easily count, including my favorite, the Asian fantasy The Snow Leopard’s Tale and, most recently, Augusts in Africa. He lives in Sheridan Wyoming, whence he writes: “Tiger country” by definition is where you tread with care, a land of risk and danger. A labor of many years, much sharp observation, depths of creative imagination, and a life of his own lived on the outermost rim of the most extreme Southwestern geography, Stephen Bodio’s Tiger Country presents a fell vision of rewilding, brought forth in writing that is nothing less than rewilded itself. You can only feel alert as you venture through it.”

Sy Montgomery, the only committed vegetarian I know who has trained a hawk to hunt, has also walked across Mongolia, lived in the man-eater infested Sunderbans on a houseboat where all the tigers swim, and made friends with a pig and an octopus. She lives in New Hampshire with her husband Howard and, until recently, a wise old border collie, who she still mourns: “Tiger Country is ferociously hones and true.”

Elizabeth Marshall Thomas should have been a conventional young lady. But her father took her to Botswana to live with the Bushmen for several years and her life was permanently changed. She has written extensively about them, as well as novels about ancient hunter-gatherers and their spirit. She kept a free range pack of dogs in Cambridge who did very well. She may be the wisest woman I know, and certainly the most observant. She said “No book should be the same as any other book, but this one is so unusual it could set a new standard. It’s a compelling, fascinating story written by a man who knows what he’s talking about.”

I respect the opinions of these people, and I hope you do. Won’t you check it out?

There will be much discussion in future posts of this blog and the new one, which I hope will be up soon. Stay tuned…

You can help support me by using one of our affiliate links above I will be getting a small amount for each purchase you make. Thank you, Steve