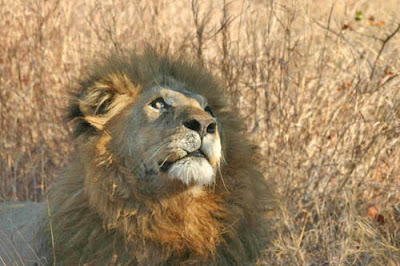 I am trying to bring the ongoing critical wildlife situation in Burkina Faso to the attention of people (literally anyone) outside that country. As you may know, Burkina Faso, Benin, and Niger provide habitat for the final viable herds of savanna big game in West Central Africa, including the last few hundred endangered West Central African lions. Now terrorism threatens the system that has supported the conservation of these animals and habitat. If allowed to go on unchecked, the herds, if not all the animals, in Burkina Faso, then Benin and Niger, will be gone in a disastrously short time. I would invite you to click on my timeline at Facebook (Thomas McIntyre) and read my several postings over the last few days on this unfolding tragedy. If there is a way of contacting you directly, I hope that I may. I wish you the best, and I am, very truly your, Tom McIntyre.

Background: For all of my nearly sixty-seven years, I have been fascinated by Africa, its environment, people, and wildlife. Over forty years ago I was able to make my first safari to Kenya, and have returned to the continent more than a dozen times. This has led to a career as a writer on outdoor topics and numerous books, including my latest, Augusts in Africa.

Last January, I was able to travel to and hunt in the nation of Burkina Faso; and it was extraordinary to see so much large wild fauna in West Central Africa–everything from elephants and lions through buffalo, Western roam, kob, hippo, crocodile, francolin, guinea fowl, all wild and free ranging. It was a small piece of Africa, but the concept of giving the wildlife value through safari camps to give the local people a stake in wildlife and wild-land conservation was clearly working. Then last week, in a series of e-mails from a contact of mine [Arjun Reddy], there was this (I will leave my friend’s words in their raw, unfiltered state so you can better judge the level of his outrage, frustration, and profound sorrow). Regrettably, in the current climate, I don’t think we can count on our government to take any action, at least not without its being prompted So it may be, indeed, up to us:

I am very sorry to inform you that the jihadists have burned down our camp in Burkina Faso last week as well as several other hunting camps. We had already cancelled the coming season! The eastern part of the country was always quiet but has suddenly become a hot bed of terrorist cells of al Qaeda SOBs.

Fortunately no one was in camp! The caretaker had gone for lunch…

They have burnt many camps now. Government is useless…if they [al Qaeda] set up camp in that area and make it a no-go area it will be the end of the wildlife. The elephants are already killed off, all the big ones, now they will finish the rest. Its very sad Tom. I want to set up a FB page to bring the world’s attention to this issue!!!

It’s a very sad situation as their plan is to create a base in that forest area and get rid of all the wildlife and government authorities. No doubt the game will all be gone if nothing is done about it soon…
Is there anything we can do to bring it to the attention of SCI [Safari Club International] and DSC [Dallas Safari Club–and I would add the conservation community in general: This is clearly a matter of wildlife, human rights, and terrorism] so they can lobby our government to put some pressure on the government of Burkina or raise attention to this situation!? Everything can be rebuilt but the game will be gone forever if this goes on for a few years! As it is they have wiped out the elephant bulls and now working on the cows and anything with even the smallest ivory!

Rather unwelcome words to share this time of year, even more so for me to hear–I knew this place, these people, these animals.

This letter represents a portion of what I am trying to do to raise awareness of this potentially tragic, for all of the three mentioned above, situation.

If there is anything you can do to bring attention to what could be the end of some of the finest savanna wildlife left in West Central Africa, I can only hope, with respect, that you will.
Thanking you for taking the time to read this letter, I am

Every year I print these two poems. One was composed in the Connecticut River Valley in the 1950s. The other is from Provence ca 1925…

October is marigold, and yet
A glass half full of wine left out

To the dark heaven all night, by dawn
Has dreamed a premonition

Of ice across its eye as if
The ice-age had begun its heave.

The lawn overtrodden and strewn
From the night before., and the whistling green

Shrubbery are doomed. Ice
Has got it spearhead into place.

First a skin, delicately here
Restraining a ripple from the air;

Some plate and river on pond and brook;
Then tons of chain and massive lock

To hold rivers. Then, sound by sight
Will Mammoth and Sabre-tooth celebrate

Reunion while a fist of cold
Squeezes the fire at the core of the world,

Squeezes the fire at the core of the heart,
And now it is about to start.

I love to seem when leaves depart,
The clear anatomy arrive,
Winter, the paragon of art,
That kills all forms of life, and feeling
Save what is pure and will survive.

Already now the changing chains
Of geese are harnessed at the moon:
Stripped are the great sun-clouding planes:
And the dark pines, their own revealing.
Let in the needles of the moon.

Strained by the gale the olives whiten
Like heavy wrestlers bent with toil
And, with the vines, their branches lighten
To brim our vats where summer lingers
In the red froth and sun-gold oil.

Soon on our hearth’s reviving pyre
Their rotted stems will crumple up:
And like a ruby, panting fire,
The grape will redden on your fingers
Through the lit crystal of the cup.

I think my remedy for the blues may be to buy a Boss I cant afford. Seems logical…

Ace big game hunter Tommy McIntyre (who is disturbed about Burkina Faso the way I am about Turkish Kurdistan , for the same reason and with about as much effect), has been healing his soul by dabbling (I hope he forgives the verb) in Beckett. Here he is in Endgame

I thought he might like to see my personal Beckett photo, taken by my friend Michigan fisherman and artist Dellas Henke, in Paris of course — that’s him with Beckett. 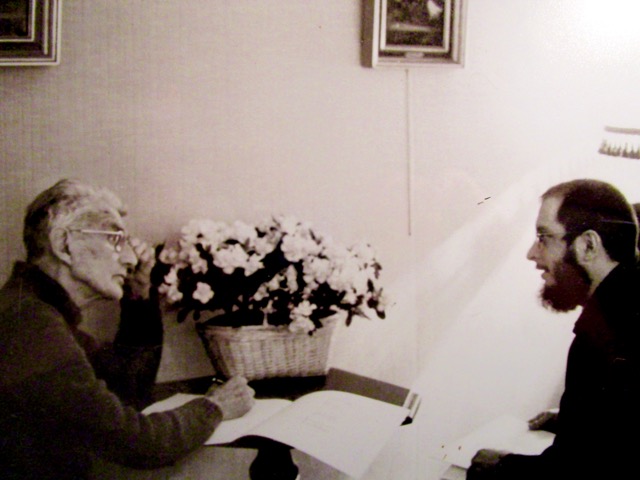 The last pic is us at our first meeting in our heedless youth, in the North Plains of Catron County.Time is not kind. 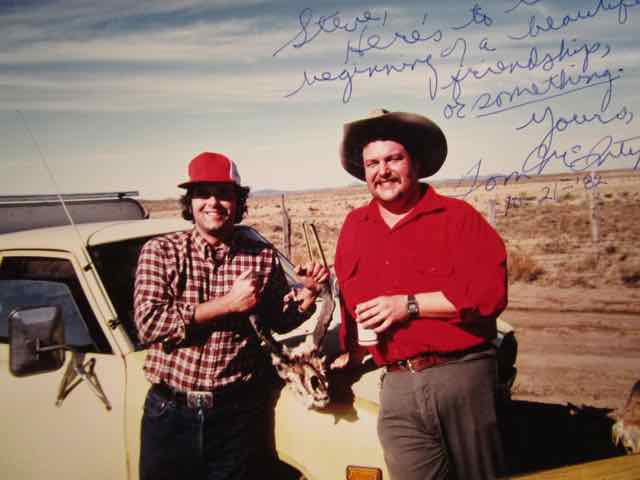 Bill broke a vertebra surfing with Hobie Alter at 26 and forgot to pay attention. He lived and adventured, shot deer and geese, sailed, collected guns, and built up a wise portfolio. He died at 56 from complications from his quadrieplegia, and left no stone unturned. 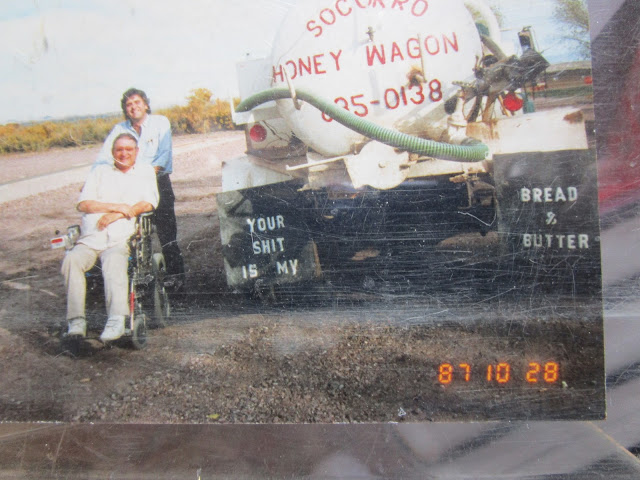 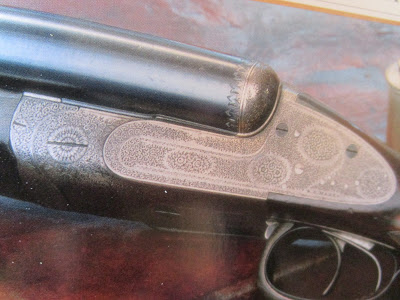 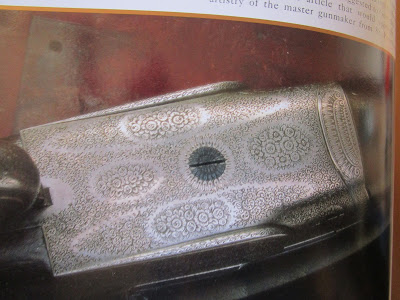 The last are the exquisite Moscow 1890′ s live bird gun that his son ¨¨used to keep them jn groceries in the 80’s….

One of my oldest and best friends, Roberts French, died in Santa Fe a few days ago. I believe he was 84. He survived a year longer than the docs gave him, but the cancer finally wore him down.

When I first met Bob and Jenny, in the early seventies at U Mass, Amherst, he was a young English prof and I an eccentric older student. (Jenny was even then a serious painter, as she still is).We soon both found ourselves on the board of English Literary Renaissance, a job for which I was not even remotely qualified for. Nevertheless, under the guidance of Arthur Kinney and Bob I became a somewhat competent nuts and bolts editor. The high point of my job was asking Philip Larkin to write something for our Marvell anniversary edition. (They had both been librarian of Hull). He was perfectly pleasant and wrote us an essay, but as I said to Bob many times, if I had known of his reputation I would not have dared to call him.

Bob was the only other ourdoorsman on the staff — a flyfisher and mountaineer, thus we gravitated toward each other. When he showed me some wonderful fishing poems he had written, I immediately bought them for Gray’s Sporting Journal for more money than poems were going for then.This gave rise to a comedy routine which we performed to the end of his days. I would say “I bought Bob’s first poem”; he would say “No, you didn’t.You bought my second and third poem. My first went to an academic review for seventy-five cents; then you bought the second and third for five hundred dollars.”

Improbably, when I first started seeing Libby, she had a friend named Muffy Corbet Moore in Wyoming, who turned out to be Bob’s sister. Bob and Jenny had retired to Santa Fe and very shortly became our best friends in Santa Fe and virtually in the state. They brought provisions to Libby’s mother’s funeral where we were stressed by being the only family members present because of the suddenness of the death. Bob and Jenny always knew the right things to do. Sometime I’ll tell here what she said to my mother after taking that mad woman over for three days during Jackson and Niki’s wedding celebration. Suffice to say now, it reduced my mother to horror and laughter at the same time. Today, with Bob barely gone, Jenny was worried about getting a chair I could sleep in down to Magdalena. Need I say that I love these people?

A colleague wrote of him: “To me, Bob French epitomized the best of the academic profession. He genuinely cared — about everything and everybody. I kept hearing how his students worshipped him; he was an ideal colleague; whenever things got tough at UMass, and they often did in those early building years, there was Bob, shoulder to the wheel. Roberts W. French led an exemplary life from which we can all learn. I am diminished and profoundly saddened at his loss.”

Here are the poems that I bought:

He stands waist-deep in swirling waters,
brooding, brooding…
when he casts his line, he shapes the sky;
clouds are formed to new precisions,
and light is flashed to sudden brightness.
When he drops his line upon the waters,it falls
as gentle as a hand on shining hair.
He gathers the river around him,
he draws the mountains into a circle.
The trees and rocks lean forward
to see him fishing, fishing.

“Writers are usually embarrassed when other writers start to “sing”–their profession’s prestige is at stake and the blabbermouths are likely to have the whole wretched truth beat out of them, that they are an ignorant, hysterically egotistical, shamelessly toadying, envious lot who would do almost anything in the world–even write a novel–to avoid an honest day’s work or escape a human responsibility. Any writer tempted to open his trap in public lets the news out”

You can help support me by using one of our affiliate links above! I will be getting a small amount for each purchase you make. Thank you, Steve