Steve and gang have been amused by this video*. I haven’t looked at it but, sadly, I can relate. Thirty years ago, I had a phase where I was hopeful for its existence. Something to be excited over in a world where the biosphere is shrinking in a mass extinction. Like the British, with their big cat fantasies on the moors, it was a longing for a lost world where mysteries were still possible. Now with billions added to the population in my lifetime and trail cameras everywhere l am resigned to smaller and smaller details from the labs of science as compensation. 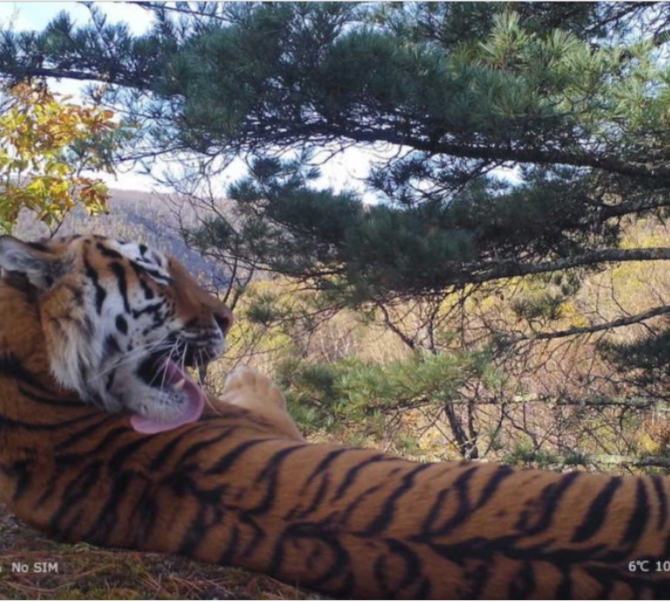 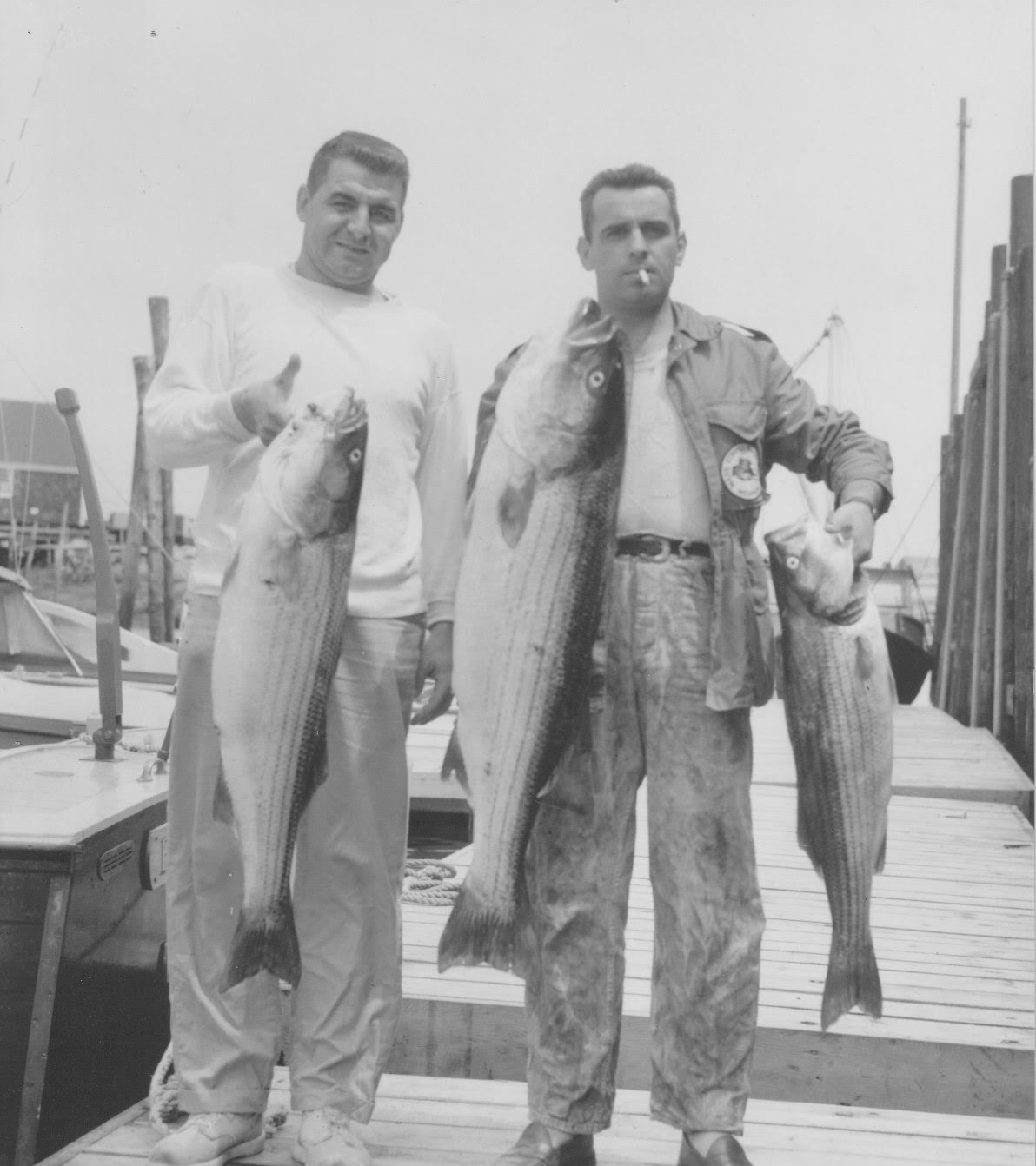 Open in a new tab to embiggen. 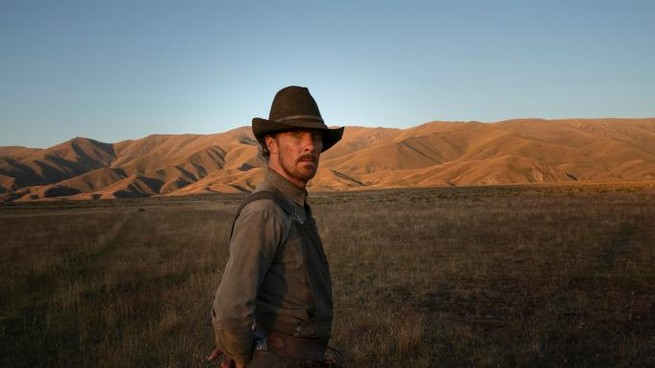 The Power of the Dog review source

“The Power of the Dog, directed by Jane Campion (in select theaters November 17 and on Netflix December 1)

After 12 years, Campion has returned to cinema, making what is maybe the most exciting TIFF film, and one that’s sure to get a lot of awards attention. An adaptation of Thomas Savage’s novel, this Western ripples with anger and sadness, following a charismatic, frightening rancher (Benedict Cumberbatch) who dominates the lives of his meek brother (Jesse Plemons) and sister-in-law (Kirsten Dunst). Campion understands the genre she’s working in, setting the roiling emotions of her characters against the striking landscapes; Cumberbatch’s performance is as immense as the peaks and valleys around him. Right now, it feels like a Best Picture front-runner.”

First published in 1967 to critical raves, Thomas Savage’s The Power of the Dog now includes an afterword by Annie Proulx. It traces the tense relationship between two bachelor brothers, Phil and George Burbank, on a Montana ranch in the 1920s. When George marries a widow, Phil, a bullying, repressed homosexual, terrorizes his new sister-in-law. And when her teenage son comes to the ranch, things get even more complicated.”

I am not sure how good this might be but it is getting some buzz which is rare for a western. I can’t think of many that were real good lately.

I looked at bits of Hell or High Water, this week. A good modern western but what was best for me was the overhead shot of where the land breaks to the lower plains. The Llano_Estacado, per this? An amazing otherwordly scene like something you would expect on Mars.

If you have facebook this is a pretty good coursing video. The weird thing is that the video shows on facebook but the link to it goes to an unrelated music video. Three greyhounds and a hare. No context info that I could see, like where, etc. It looks like the US but may not be.

A deep dive into the gun issue. Basically, a draw. One of the better pieces I have seen on it.

LIbby here. We lost our beautiful Irbis two weeks ago. He was suffering from some neurological affliction in his back and could no longer stand or walk, and had stopped eating. He was by far the shiest of all our dogs — he broke a rear leg very badly when he was ust eleven months old and after being plated together had to spend several months in his crate while he healed up from the surgery. His leg healed up well, but being isolated from other dogs and normal socialization with the world stunted his social growth. He retreated to the safety of his box when unknown people were in the house.

He was fine with us, and we really loved him for all his quirky ways. We miss him. Will have a photo up soon.

After over thirty years of anywhere from one to seven dogs, it is very strange to be without any dogs at all. 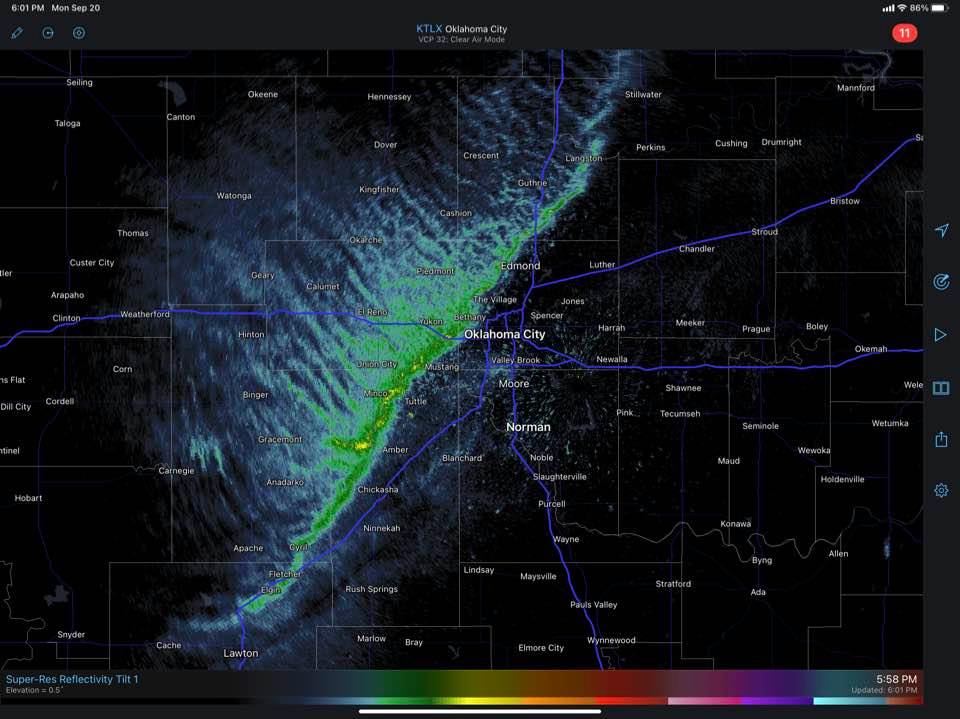 “Cold front moving through right now Sept 20—but that’s not rain on the radar. Those are Monarch butterflies, riding the front south on their annual migration.” 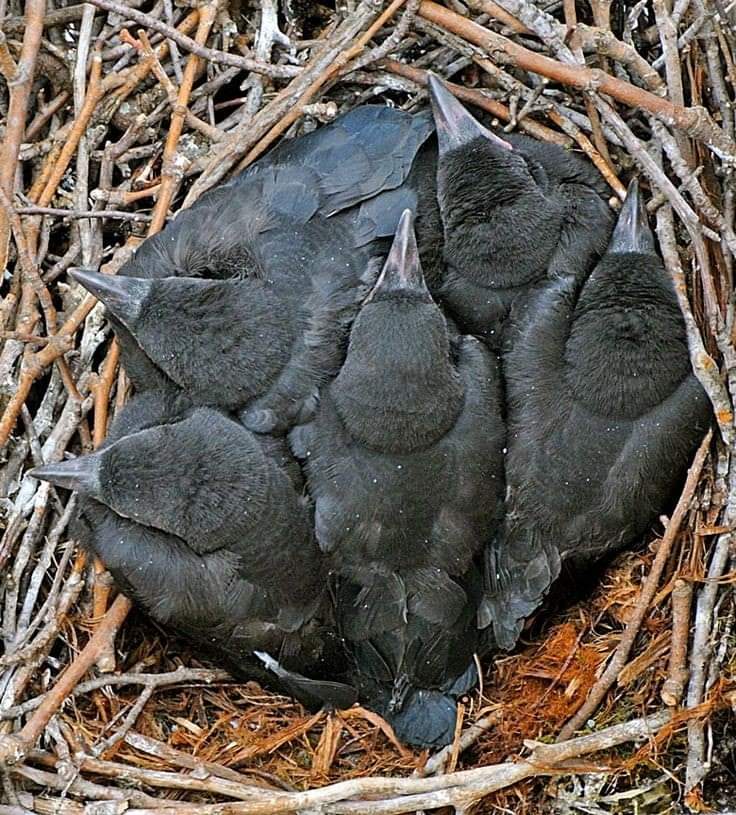 I have been feeding multiple generations for years now. I think it is the same family line that nests in the yard. I always get a laugh out of them. The great thing about corvids is that the lights are on and somebody is home. There has been a lot of work done on their intelligence I have sent Steve over the years. They even have a concept of zero.

I collected sporting books years ago and I was surprised that one bookseller had so many books on corvids. I asked and he said it was a big interest area. I joined a corvid group a few years ago. It had a few 1000 members at the time. Now it is six figures . People are into corvids like I never knew. 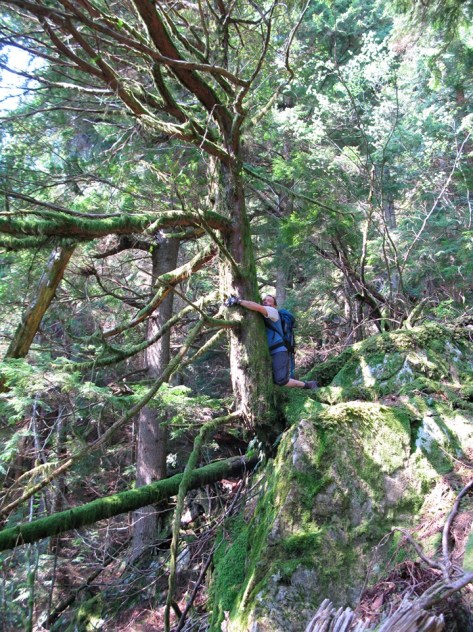 I love these kind of bio quest stories.

The blog is a good one on west coast BC nature, hikes, etc. 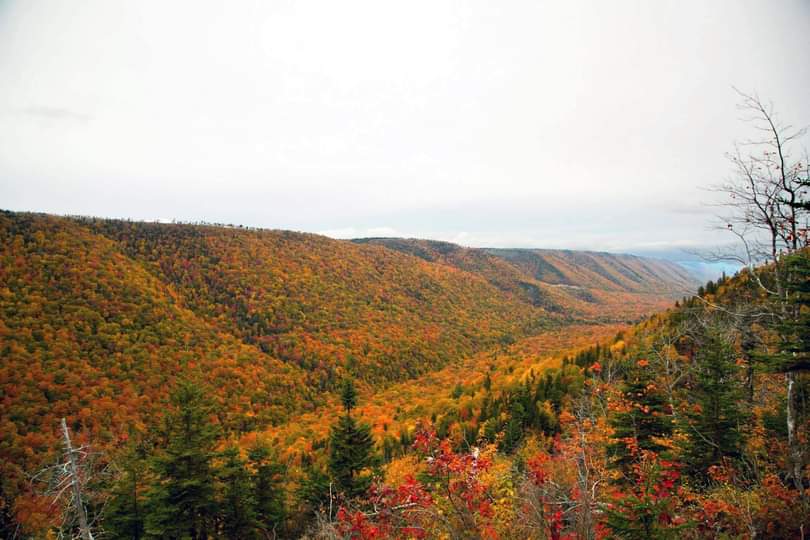 The Aspy valley in Northern Cape Breton in a few weeks.

I was at this spot in the spring, a few years ago. It would be good to be there now. 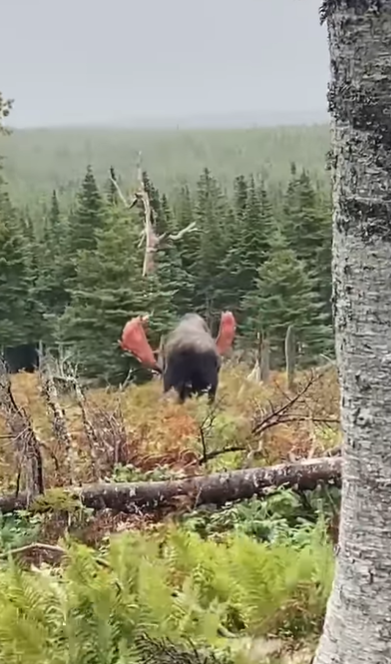 ​There are some good moose up there. This is one from this month. Forty years ago budworm set back the fir and birch exploded. The moose​ population exploded​ with it. ​Moose are adapted to forest pulse ecology caused by fires, etc. ​The moose were expirated in the 1800’s and reintroduced in the late forties into the park from Alberta. They kept a low profile until the veg​etation reset and quickly developed one of the highest quality herds in the ​Canada, in the 1990’s. ​The moose ate the browse off and it is rare to see birch or big bulls anymore. We shed hunted up there for 30 years and big sheds were common then declined in the last 20 years with the food quality. The one in the pic is the best I have seen in a while.
​​I had a license once and saw a bull like this a couple of days before the season. ​Alas, no moose for me, though. 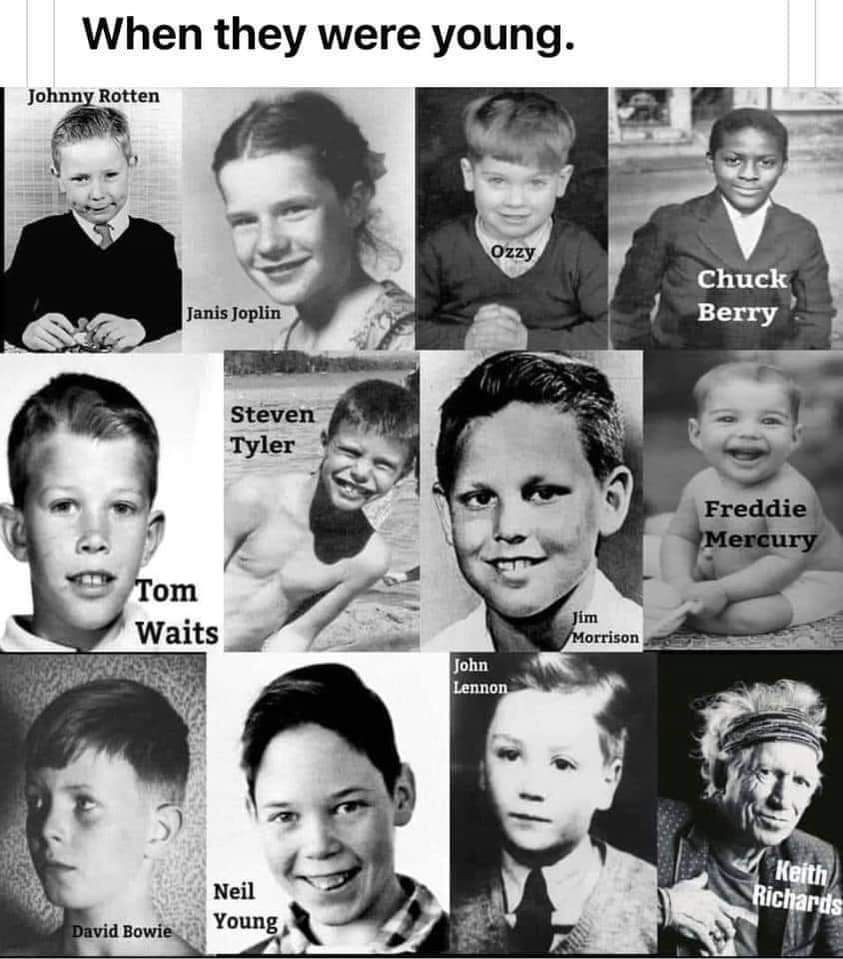 Richards memes are everywhere now but they are good for a laugh.

Fifteen years ago, a buddy saw a concert and was very impressed with Jagger’s vitality at his age. Richards, however, “was the resuscitated corpse I expected.”  I laughed and it was well before the flood of memes, lately.

Of  course, this dates anyone if they get the joke. Under fifty it is …Who? What?