I apologize for my lack of new posts lately. I am still not completely recovered from not having my meds for ten days and our computers have been misbehaving: the keyboard on the MacBook refuses to type several letters, and the email on the iMac duplicates itself at the server end, sometimes more than 75 copies worth. This fills up our in-box very quickly. When I manually delete all of them, it repeats the duplication process. Gilanet, our provider, can’t figure it out. Has anyone else experienced this? Suggestions/possible solutions gratefully accepted.

Thank you all for your patience as I get straightened out — I’ll be back soon! 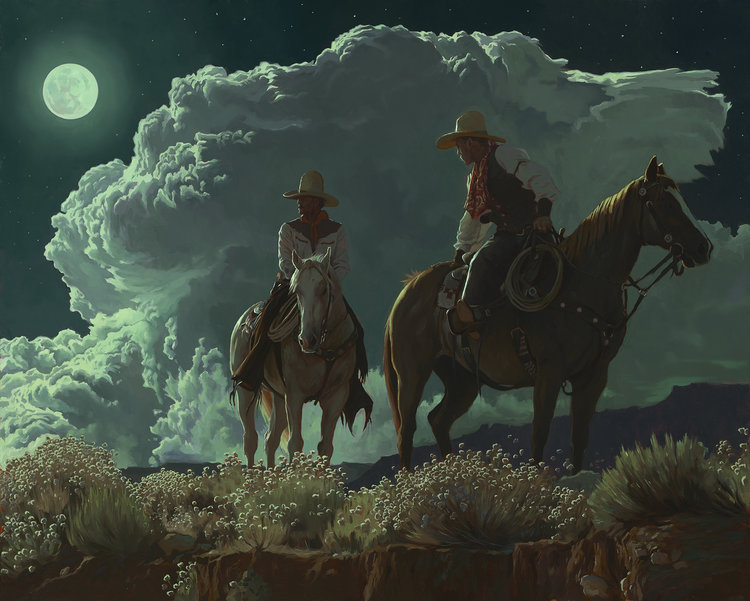 “Riders of the Coyote Moon”

I never heard of him before. He seems to have made a career out of these cloudscape pix.  I like moon scenes but there is lots of artistic license in it. He is an imitator of others but that is nothing new in art. 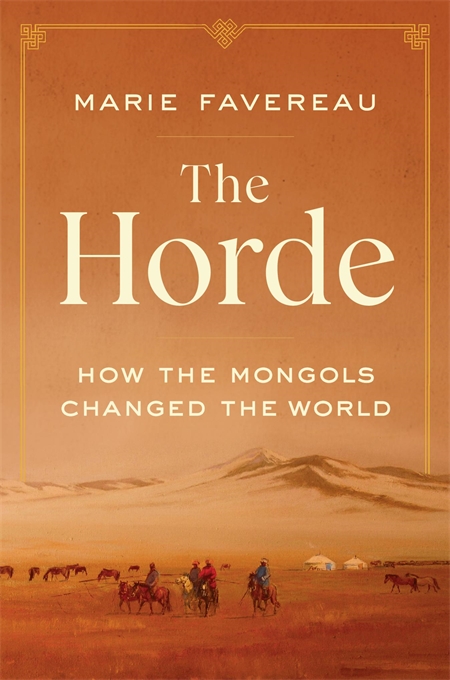 Why do Genghis Khan and nomads, more generally, so deeply upset the supporters of nation-states? First, the history of the Mongol Empire is a shared legacy that does not fit into narratives centred on monolingual, monoethnic and monoreligious communities. Second, nationalists have yet to accept that civilization is not necessarily a product of urban and sedentary development. Third, our traditional world history narrative is the success story of the sedentary world from the perspective of the sedentary peoples. In fact, over two millennia, humanity witnessed the rise and fall of several nomadic empires that profoundly shaped our history on continental scale. But this world-shaping phenomenon remains poorly understood, and nomadic empires are seen as marginal or secondary historical phases.

Why the history of nomads, such as Genghis Khan’s Mongols, is so unnerving to today’s nationalists

I saw this and it thought it may be of interest to Steve and others. 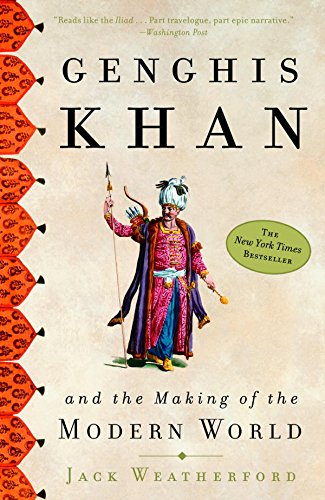 I haven’t read, The Horde, but I did read the above and it stuck with me. Both books have some good reviews and revise the historical bias against the horse nations.

There seems to be some similarity to the Charles Mann books, 1491 and 1493, where new world natives are presented in a more positive light. I saw again, recently, where Native American political structures may have been the foundation and inspiration for democracy in the new world. Mann promoted this so it may have cycled from there.

Reid circulated a good piece about Central American political cultures, a while back. I don’t see it now but it had some similar themes.

This outstanding British Columbia muley buck showed up, last night, and as a connoisseur of antlers I was impressed. The color, the mass, the character are all there. It will not score high on the B&C scale but as the hunter says who wouldn’t be happy with it. I think it was Chuck Arnold, an early antler collector, who told me he considered antlers ‘organic sculpture’. This buck has all of that and more. 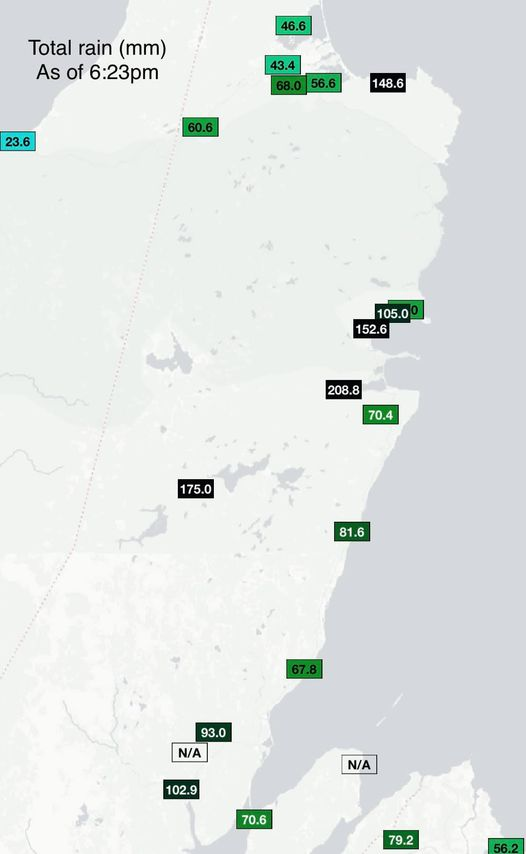 “If anyone has pictures or video of flooding or road washouts around Ingonish and Neil’s Harbour, please share. Serious situation there right now. Some communities may be cutoff. Rain totals as of 6:23pm. 208.8 mm and counting at Ingonish River. We still have another 24+ hours of rain on the way.“

We got some here but a  lot more was up in Cape Breton. Newfoundland gets it today, Tuesday, and gets it good… 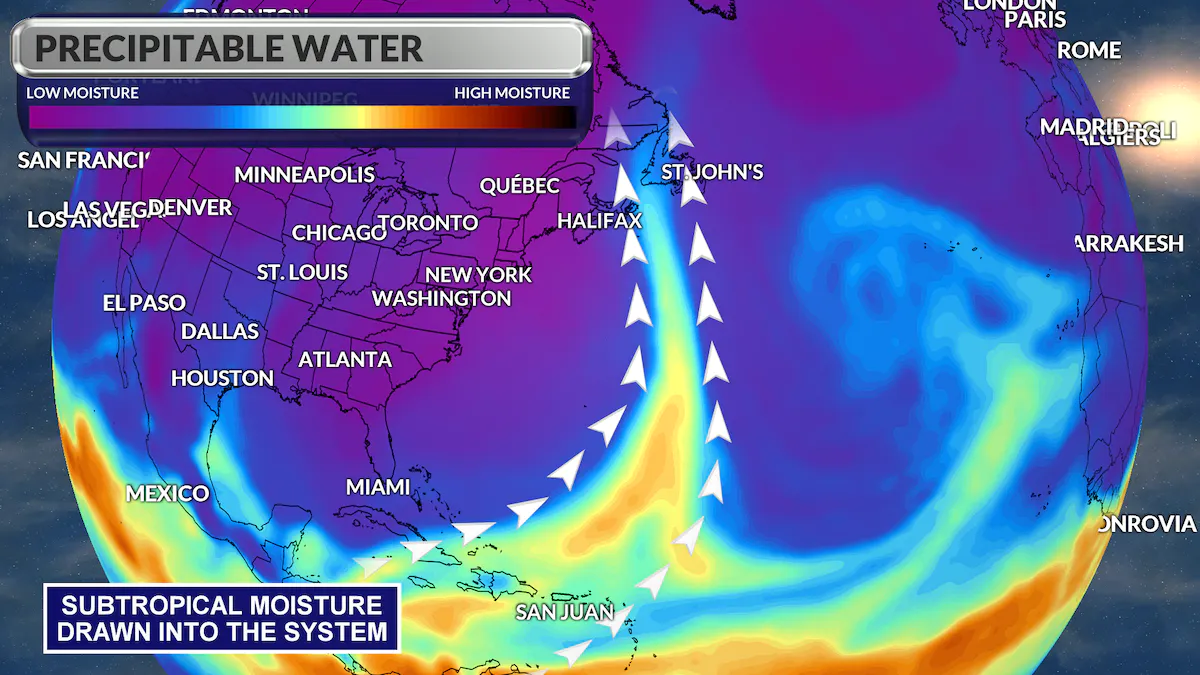 “Torrential rainfall over the next 24-26 hours will target an area from Port aux Basques to west of Burgeo. As much as 150-250 millimetres is forecasted for coastal communities with amounts of 300-400 mm possible in the higher terrain and mountainous regions. – SaltWire Network”

…and we thought we got some.

Welcome to the Anthropocene.

Some good news.  I knew they had big problems out there 20 years ago but had not heard much since. 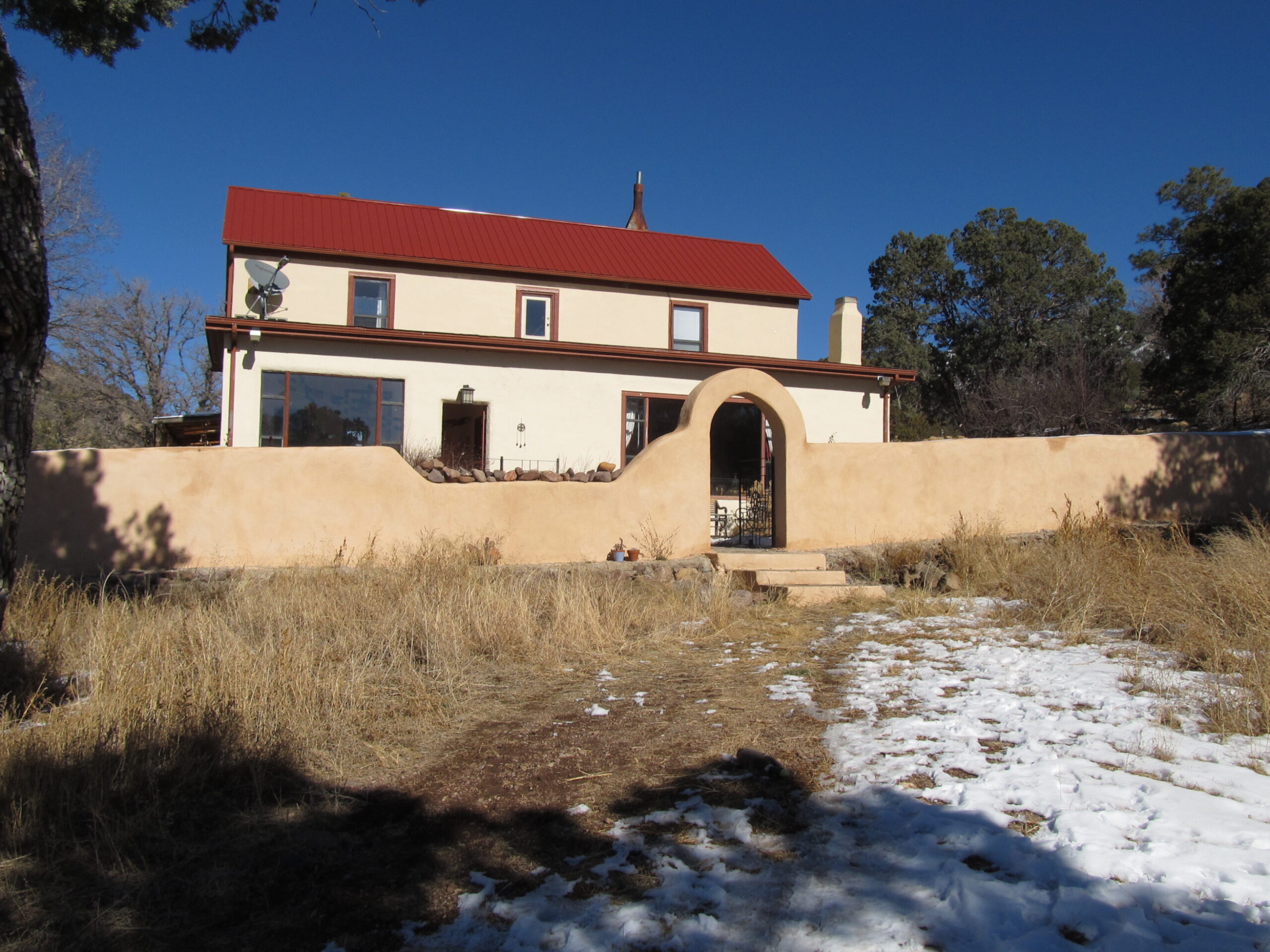 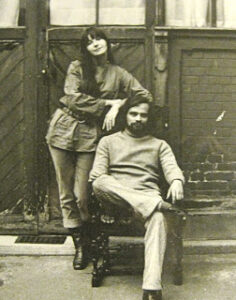 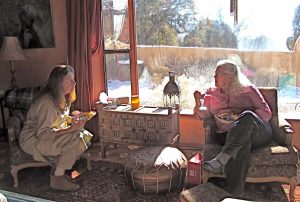 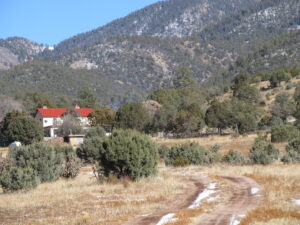 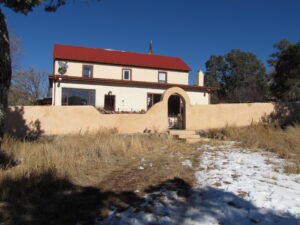 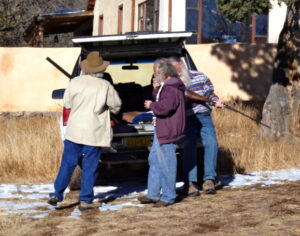 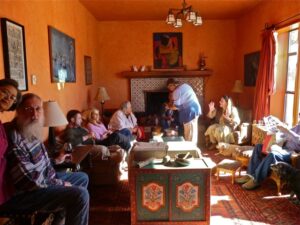 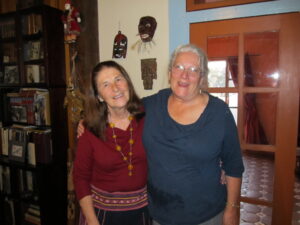 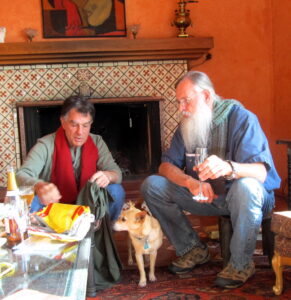 A Yale med school grad and a guy retired from running an  Ohio Audubon refuge (Vince DiMarco , the late Pepe, and  John Wilson). 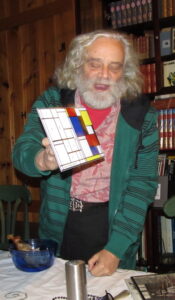 Jean-Louis with one his satirical pieces (Mondrian) 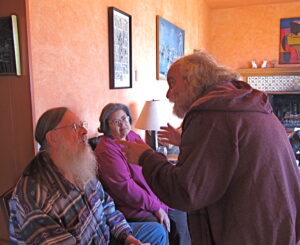 Jean-Louis in an animated discussion with  John and Carolyn Wilson. 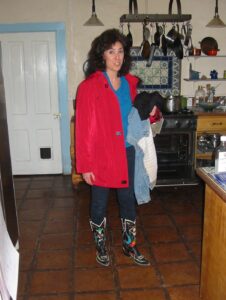 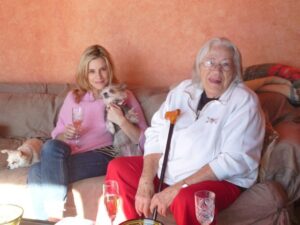 Rolf Magener, the constant traveller, who makes me look provincial (MUST POST) 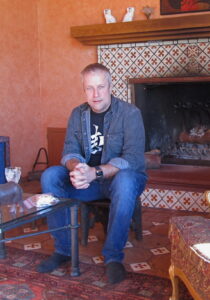 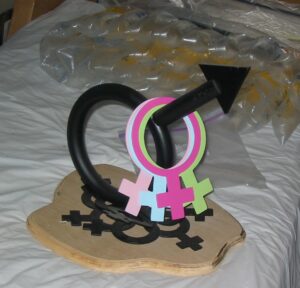 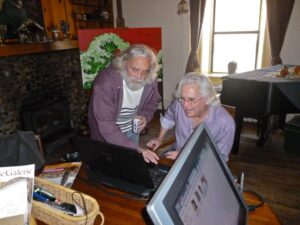 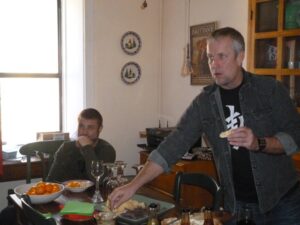 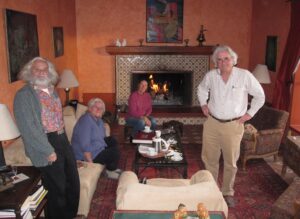 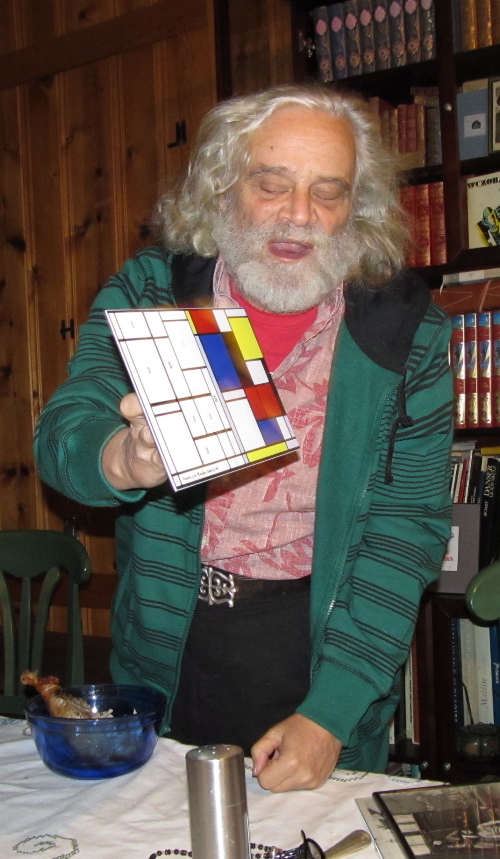 My friend  Jean Louis  Lassez died last week at his Muleshoe Ranch, after a long illness .In the usual course of things I would have known he was not doing well; we were close despite our seemingly disparate  backgrounds. Or maybe not so disparate—we were both Catholic school kids,  ambivalent about ‘Old Mother Church’,  but were both interested in Buddhism, and travelled in Asia enough to get in trouble and get out of  it, as every seasoned traveller learns.. He lived on a ranch 20 dirt road miles  from town and  was as deaf as a post, so  he didn’t communicate easily with anyone he didn’t want to (we had some hilarious loud…  discussions, with me finally shouting in French in his good ear.

He was NOT the usual wealthy European, squatting  uneasily in a western habitat, looking askance at the neighbors’ guns. He was something of a gun nut himself — albeit of a certain kind. He loved the well- chosen guns of  the  classic western and adventure movies.  “Zeese” he would say “ees John Vayne’s gun from Stagecoach” Or, for his formidable  big – frame Model 629 Smith, the favorite  gun of Warren  Zevon and  Dirty Harry :”Zees ees Clint Eastwood’s gun, .44 magnum!”.

I would respond with obscurities— : “Zees is Roy Chapman Andrews gun ”  (of a  model 99 Savage that resembled the one that the model  for India Jones took to Mongolia to shoot wolves and antelope. ) And then we would shoot them at some improvised target  in his yard. Somebody inspired said that   JL was @A perfect cross between the  Maharishi Mahesh Yogi and Yosemite Sam@ EXACTLY.

Mostly he and his wife, Catherine,  had  fun. With the ease of a perfect relationship that must have  lasted 50 years and  produced an interesting daughter, and a  modest independent income, they were free  of some of the usual constraints. They were the perfect hosts, and we spent lot of holidays, as well as ate a lot of non- holiday al fresco meals, at Muleshoe ranch. See below..

Despite the name ‘Muleshoe’ the home building was almost comically appropriate. I have written about how some of the early settlers here were  Provencal and Swiss  Italians, including some of my distant relatives. I would guess that the builders of the Muleshoe hailed from the Haut Savoie, further West but under the same “southern” cultural umbrella… anyway it is a perfect Savoyard farmhouse to my eyes, with the addition of the only outdoor swimming pool in the county, done by mostly non resident owners in the movie biz who might have found the place too isolated.(Catherine, do you know?)

Not so the Lassez, who moved in shortly after Jean Louis’ early retirement from Tech. I have a feeling that they didn’t want him to go but he was ready. They were northerners— he a Normand, she a Parisienne of Jewish descent whose family was in the art biz—  but they lived a  @southern@ * lifestyle, of ease and hospitality and generosity, for well over a decade. They were a refuge for more than  the stray dogs they took in. They also travelled hard in Asia, making photo books and giving me a glimpse of an Asia that might be considered part of my Asian habitat- above all Tibet- which is a logical extension of my world,  but which I will never see (that is hard to say!). They had improbable adventures- at the first shocks of the Nepal earthquake they disappeared into Kathmandu and we couldn’t find them for three weeks! They were in their  middle 60s at the time I think..

And then, although I was slow to realize it,  JL taught me about the virtues of staying home and working on your  art.

He will be missed, first by Catherine and their daughter Sarah, but also by many others.

*”southern” when referring to things French tends   to mean the following. When I was in the Vaucluse- northern Provence, but defiinitely Provence- we had dinner one night with the local postman, He was a Provencal patriot , but he had been born  in Italy. He told me, @oYou were lucky to have your work down here rather than in the North. WhenI first worked for the Post Office  I had to  work way up north, and it was TERRIBLE.  It is hard for happy southerners like us—  all those  gr:ey, sour- faced people goimg around snarling about their grey, grey weather and their grey, grey  lives.@

He gave me an incredulous look , as though some things were  too horrible even to contemplate @Non , m’sieur—  LYONS! @!

Which if  I read a map right is all of forty miles north of where we were  speaking,…

When  Malcolm Boyd (Painted Horses, Cloudmaker) saw the article ” All You Can Read” by Parul Sehgal in the November 1 New Yorker , his reaction was  “It reads like dystopian science fiction!”

Further: ” .., the book ( his recent Cloudmaker)did not garner a single meaningful review in any significant outlet, nor did Grove put any effort into publicity or promotion, which just seems bizarre after the initial investment. Probably some of it is pandemic fatigue, but I think a lot of it has to do with the identitarian politics of media in general at this point. My editor’s former assistant (who happens to be an enrolled Kiowa!) told me there was some concern at Grove that the book would be interpreted as endorsing “American exceptionalism,” which is a baffling assertion in any case, but may explain why they tried to publish as quietly as possible. Crazy times!”

I think the problem is in the system and is bigger than that, affecting books as disparate as mine, Malcolm’s , and even Michael  Gruber’s  (why he is forced to self -publish these days). Amazon is just not set up for sale of our books, which tend to start by  selling slowly and whose virtues are spread by word of mouth.

“On 2018, some 1.6 million books were reportedly self-published — all of this on top of the tens of thousands released by traditional publishing houses. How can a writer work within this flood? It’s not an entirely new quandry. One of the “women of the inkiest description” from “New Grub Street” surveys the deluge of her own era with dismay: “When already there was more good literature in the world than any mortal could cope with in his lifetime, here was she exhausting herself in the manufacture of printed stuff which no one even pretended to be more than a commodity for the day’s market. What unspeakable folly!”